Okay, so this abstract is a bit more on the touchy-feely side. But it is extremely important because it speaks to the balancing act we all have to perform in order to achieve a satisfying harmony between work and everything else.

Older generations of surgeons threw nearly all of their energy into work, and ended up with lesser amounts of involvement with their family and everything else outside of work. At the time, , though, people seemed to be (mostly) satisfied. That’s just the way it was.

But now, there is much more emphasis on a healthy lifestyle, and this includes a healthy delineation of work and not-work. An AAST-approved survey was sent to the membership which tried to parse out the various factors involved in work-life balance, happiness, and burnout.

Here are some very interesting factoids:

The authors concluded that trauma programs should concentrate on optimizing the modifiable factors listed above to improve satisfaction and decrease burnout.

Here are my comments: Well, I don’t have many, nor do I have any questions for the authors. This is a purely descriptive study that paints a general picture outlining what seems to be important in enhancing satisfaction with one’s career path. It is an interesting read, and outlines many of the factors that influence this. I’m sure it’s not all of the factors, but they hit the big ones.

All trauma professionals should look at this data and read the final manuscript. It may help you make changes to optimize your own work-life balance and career satisfaction.

The management of blunt spleen injury has evolved significant over the time I’ve been in practice. Initially, the usual formula was:

This began to change in the late 1980’s, and beginning in the early 90’s nonoperative management became the rage. We spent the next 10-15 years tweaking the details, gradually reducing bed rest and NPO times, and increasing the success rate through smart patient selection and discovering new adjuncts.

One of these adjuncts was angiography with embolization. The ShockTrauma Center in Maryland was an early adopter and protocolized its use in patients with high-grade injuries.

But now, they are questioning the utility of this tool in certain patients: those with splenic pseudoaneurysms (PSA). They theorized that modern, high resolution CT identifies relatively unimportant pseudoaneurysms. They conducted a 5-year retrospective review of their experience.

The authors conclude that a third of pseudoaneurysms may be clinically insignificant, and that 40% of them persist after embolization. They do not, however, offer any recommendations based on their data.

Here are my comments: This is an interesting study. My read of the abstract and slides would indicate that this group routinely sends all Grade 3 and 4 injuries to angio, and Grade 5 could go to either angio or OR. They take their good time going to interventional radiology (mean 17 hours from arrival), and get a routine followup CT 48-72 hours from hitting the door if they didn’t go to the OR.

If I were to play the devil’s advocate, I might think that interventional radiology was being de-emphasized for some reason. Was there some reluctance to send patients there, or limited availability? This might explain the long access times. And how are the radiologists not shutting down 40% of PSA that are seen?

I am intrigued by the study, but there are a lot more details needed to get some good takeaways from it.

I’ll be all ears on Friday when this abstract is presented live.

The next abstract in this series poses a challenge to long-held dogma. More than three decades ago, examination of vascular injuries was divided into “hard signs” vs “soft signs.” Hard signs consisted of findings like pulsatile hemorrhage, expanding hematoma, absent distal pulses, thrill, or bruit. These were believed to be absolute indications to proceed directly to the operating room for exploration and repair.

But now, in this day and age of CT angiography  (CTA)and all manner of endovascular techniques and tools, things seem to be changing. There is more reliance on CTA, and a willingness to image patients with hard signs before considering an operation. But is this prudent?

The AAST established the Prospective Observational Vascular Injury Treatment (PROOVIT) database as a multi-institutional effort involving major trauma centers around the country in 2013. A group based at the Massachusetts General Hospital massaged the data to study current patterns in assessment and management of patients with penetrating extremity vascular injury. Specifically, they were interested in examining the presence of hard signs and the outcomes after initial imaging and operative management.

The authors concluded that stable patients with hard signs of vascular injury may benefit from preop imaging to help plan the specific mode of repair to be performed (open vs endovascular / hybrid).

Here are my comments: This was a retrospective review of prospectively collected data. The database has a wealth of detail, and this is a simple and clean analysis of a specific question. The results and analyses were straightforward and easy to follow.

What this study does is to call into question the old dogma of rushing straight to the operating room with any patient who has hard signs of vascular injury. The advent of endovascular tools and techniques has allowed us to more easily address some vascular injuries that were previously problematic due to their location and accessibility.

Being a descriptive study only, it showed us “what we did” with vascular injuries during the time period of the database. And it also showed that the surgeons were more likely to use endovascular techniques if they were able to take the time for preop imaging. Most importantly, it demonstrated that gross outcomes like death, reoperation, and amputation were not increased by the delay needed to obtain that imaging.

I consider this to be a pilot project. And the authors correctly state that the next step is a true prospective study to confirm that this should be the new way of thinking about hard signs in the future.

Here are some questions for the presenter and authors.

This was a fun abstract to read! I’m looking forward to the presentation next week.

The next abstract is an interesting demonstration of the use of technology is trauma resuscitation. Pretty much all technology imaginable. It details the use of a “hybrid ER” room, which combines resuscitation space with all sorts of imaging and even interventional angiographic procedures. Here’s an image of the room when it was first written about in 2012. 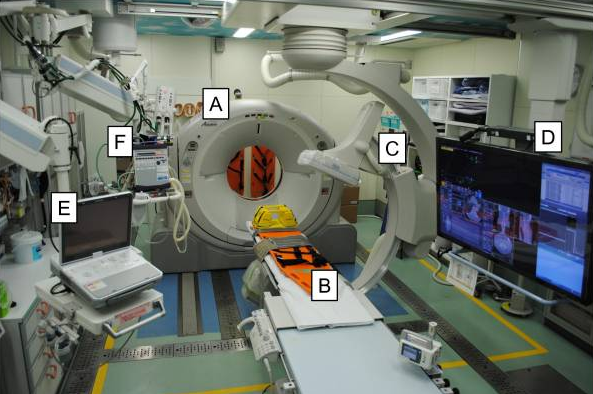 This setup was installed at Osaka General Medical Center in Japan nearly 10 years ago. The authors have written occasional papers about it, and have now performed a study on its impact on trauma patient survival. They studied major trauma patients during two time periods. The first was pre-installation (2007-2011), and the second started immediately after installation (2011-2020). They specifically looked at 28-day mortality, and tried to tease out the relation to injury severity. 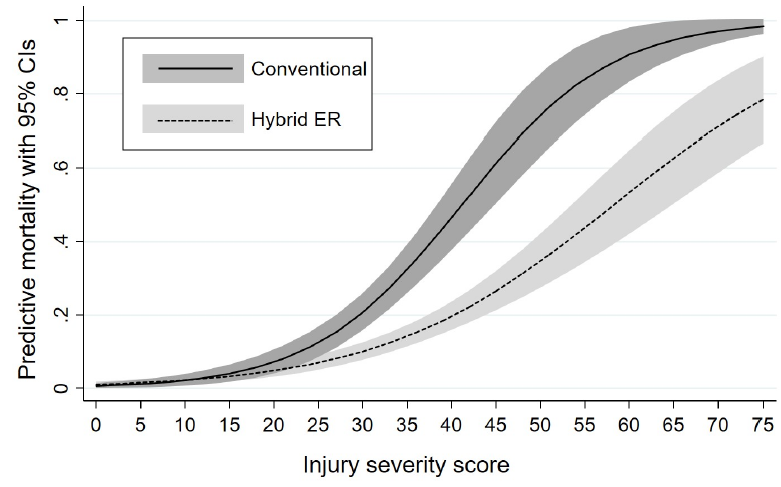 The authors concluded that the hybrid ER may have improved survival, especially in the more severely injured patients.

Here are my comments: Hmm. This is an association study that only looks at one variable, the new hybrid ER room. How many other variables may have a potential impact on survival? And how have those variables changed over the past 11 years? I worry that the study premise is too simplistic, but it certainly makes this unique resource look good.

As you can see, I’m a bit uncertain about how this works and how the lessons can be applied to other centers. This is a unique resource, and the rest of the world needs to know a lot more about it before deciding to try it out themselves.

Blunt carotid and vertebral artery injuries (BCVI) are an under-appreciated problem after blunt trauma. Several screening tools have been published over the years, but they tend to be unevenly applied at individual trauma centers. For an unfortunate few, the only indication of BCVI is a stroke while in hospital.

The overall incidence of BCVI is thought to be small, on the order of 1-2%. But how do we know? Well, the group at Birmingham retrospectively reviewed every CT angiogram (CTA) of they did in a recent two year period. They did this after adopting a policy of screening all their major blunt trauma patients. Each patient chart was also evaluated to see if they met any of the criteria for the three commonly used screening systems.

Here are my comments: The authors found that the incidence of BCVI is about 8x what we previously thought. What we don’t know is the percentage of these patients that go on to cause stroke or other neurologic deficits. But this is somewhat frightening.

Even more frightening is that the screening systems that we rely on fare so poorly. The Denver and Modified Memphis criteria have a true positive rate that is the same as a coin toss. And even if the patient meets none of the criteria in any system, about 5% BCVI will sneak through (NPV 95%).

This is an easy to follow paper with a solid analysis and real world implications. Excellent work!