The Robert Jones dressing is a thick, padded bandage classically applied to the thigh and leg. It is thought to reduce swelling by applying even pressure to the extremity, which in turn should promote healing. And since it is a soft dressing, as opposed to a cast, there is less chance of developing skin breakdown from direct pressure. Here’s a compression-type dressing described in 1937 using stockinette, cotton wool, and elastic cloth, although it was not attributed to Jones at that point.

Charnley provided a detailed description of the bandage in 1950, and was the first to refer to Jones.

Interestingly, Robert Jones never really referred to the dressing by name. There were references to a “pressure crepe bandage over copious wool dressing” in his operative logs, but it wasn’t until much later that his name became associated with it. Because of this, the composition of the bandage has varied greatly over time.

But who was Robert Jones? We in the States are fairly ignorant, but my UK readers are very familiar. Jones was a British surgeon who practiced through the late 1800s and past the end of World War I. He learned about fractures from his uncle, and became one of the few surgeons of the time to be interested in fracture care. Until then, orthopaedics was focused primarily on correcting deformities in children. He received his FRCS in 1889. After being appointed Surgeon-Superintendent of the Manchester Ship Canal, he established the first comprehensive accident service in the world to take care of injured workers. He founded the British Orthopaedic Society in 1894, and introduced the concept of military orthopaedic hospitals during World War I. His innovations led to significant decreases in morbidity and mortality from fractures in the war, particularly of the femur.

And does his eponymous dressing actually work? There has been little research in this area. There is one study that I have found that actually measured compartment pressures to see if the loss of edema from compression caused a noticeable pressure decrease. Here are the factoids:

Bottom line: Robert Jones’ fame is well deserved. However, his dressing (which he did not name, and may not even be what he used), did not have the pressure-reducing effect on an injured limb that surgeons thought. No studies on edema and healing have been done. It’s basically a fluffy dressing. However, that is a good thing. It keeps the leg padded, protecting the skin, and immobilized. It’s like a very well padded cast, without the risk of skin breakdown. And because of its simplicity, it will probably be used for quite some time to come.

At least that’s what I learned way back when. After recently finding myself spouting off those numbers, I wondered if it was really true. Our diagnostic imaging and vascular care has increased considerably in the last few decades, so I decided to check it out.

This nice image from EMDocs.net shows the various dislocation types. It also gives you an idea of why an associated vascular or nervous injury is so common. 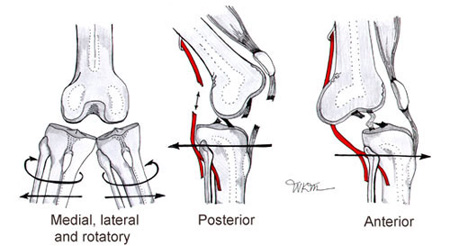 (The nomenclature of the dislocation is based on the direction the tibia and fibula move with respect to the femur.)

The orthopedic surgery group at UCLA performed a meta-analysis of the literature relating to knee dislocation complications. They identified 7 papers describing the injuries of 862 patients.

If your patient tells you that they felt a popping sensation in their knee, or if they have a mechanism consistent with knee dislocation (e.g. pedestrian struck), be very suspicious for this injury. A thorough yet gentle exam should be performed, including good neurologic and vascular exams. Calculation of the Arterial Pressure Index (API) may be helpful, but will not keep you from obtaining imaging studies. Multi-plane imaging of the knee is required, and a CT angiogram/runoff study should be performed to exclude a vascular problem.

Penetrating trauma has been increasing over recent years, especially here in sleepy St. Paul MN. On occasion, we all see patients who have sustained gunshots that have caused fractures. The persistent question has been: open fracture or not?

Do these patients need antibiotics? A wound washout? Are they at risk for lead poisoning? Unfortunately, there are no consistent answers in the textbooks. The orthopedic trauma group and MetroHealth in Cleveland sent surveys to 385 members of the Orthopedic Trauma Association (OTA) to see if there was some consensus.

A total of 173 of the surveys were completed, which is actually a very good success rate.  About 72% were in practice at a Level I center, 18% at a Level II, and 10% at Level III/IV or non-trauma centers.

There was considerable heterogeneity among the responses. Here are the summaries for the specific questions asked:

How would you treat a gunshot injury near bone without fracture?

The majority of respondents recommended non-operative treatment and some form of antibiotics. However, there was no consensus regarding route of administration or duration. About 75% were in favor of a single dose of IV antibiotics, and half of those also recommended addition oral antibiotics. The presence of a retained bullet did not change management.

How would you treat a gunshot with a stable fracture to the fibula?

How would you treat a gunshot traversing the  knee joint with a retained bullet?

About half stated they would explore the joint and the other half would not. Nearly all recommended antibiotics, with the majority in favor of a single dose IV followed by some duration of oral.

Is the union rate of a tibial shaft fracture from a gunshot treated surgically different than a non-gunshot fracture?

What about a gunshot with a displaced tibia fracture without other skin wounds?

How would you handle a gunshot traversing bowel that results in a stable pelvic fracture?

There was no agreement here at all. The majority (61%) would not debride the fracture, but would recommend IV antibiotics. Most of those recommended at least 24 hours of coverage. The remaining surgeons recommended surgical debridement, and were evenly split over brief vs longer antibiotic duration.

Bottom line: This is a “How we do it study” that is based on science as interpreted by these orthopedic surgeons. In general, OTA members behave as if they consider gunshots to bone as open fractures. More than 90% recommend antibiotics any time a bullet touches the bone. But once the fracture requires operative management, it is treated like a non-gunshot fracture from the standpoint of debridement and antibiotics.

The most interesting part of this survey was the total lack of consistency in the answers. It is clear that there is wide variation in the practice patterns of these surgeons, which usually signifies a lack of good data pertaining to the problem.

In my next post, I’ll discuss the lead poisoning question I mentioned above.

Here is a followup to my previous hip dislocation post. It’s a short 5 minute video that goes through the entire process of reducing hip dislocations. There are lots of little tips and tricks. Enjoy!

In my next post, I’ll describe a novel variant of the hip reduction technique, the Captain Morgan.