Last week, I published a preliminary practice guideline for nonoperative management of abdominal stab wounds. Click here to view it. A key part of that guideline is the serial abdominal exam. Surgeons talk about this a lot, but how do you do it? I posted about many of the details here.

The serial exam is nuanced enough so that it deserves its own clinical practice guideline! You won’t find this in any doctor or nursing books. It’s really simple, but the devil is truly in the details.

Click this image or the link below to download the guideline. I’ve also posted a Microsoft publisher version in case you want to modify it to suit your center. 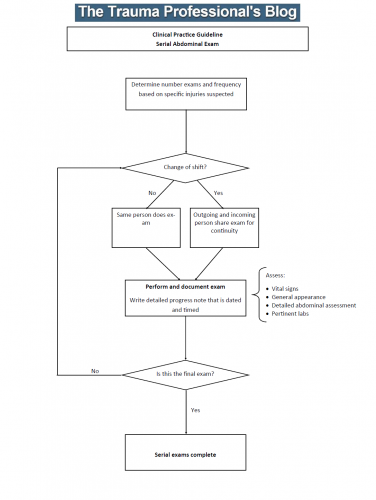 In my previous post, I reviewed a new paper that examined the appropriate amount of time that patients should be observed for nonoperative manage of an abdominal stab wound. Many of you know that I am a fanatic of properly crafted clinical practice guidelines (CPG). I decided to make a first pass at converting the LAC+USC group’s paper to something that will be helpful at the bedside.

This CPG incorporates the patient selection and timing information published in the paper. It breaks the process down into easily followed tasks, and fills in the blanks for shift to shift management. The CPG is displayed in an “if this, then do that” format. This firms up decision making and makes it easier for your trauma program to monitor compliance with it. 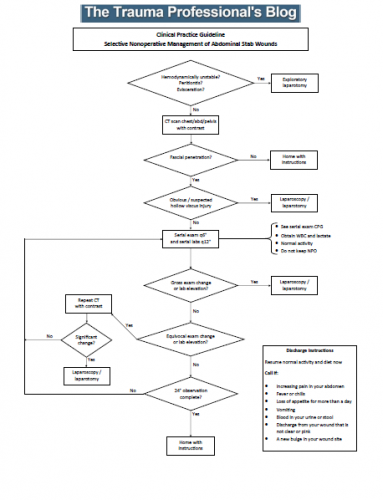 A note about CPGs: they generally cover about 90% of clinical cases. Obviously, they cannot provide guidance for certain rare combinations of circumstance. In that case, the trauma professional should do what they think is right for that situation. Most importantly, they should document this rationale in a progress note.

Here are answers to some of your questions in advance:

And please leave comments and suggestions for improvements in the reply box below or by email to [email protected] There are always ways to make CPGs even better! I have also included a Microsoft Publisher file so you can modify this guideline to better suit your trauma center.

In my next post, I’ll publish the serial abdominal observation CPG I mention in this one.

Back in the old days (which I remember fondly), we didn’t pay too much attention to the ratio of blood to plasma. We gave a bunch of bags of red cells, then at some point we remembered that we should give some plasma. And platelets? We were lucky to give any! And to top it all off, we gave LOTS of crystalloid. Turns out this was not exactly the best practice.

But things have changed. Some good research has shown us that a nice mix of blood component products is good and too much crystalloid is bad. But what exactly is the ideal mix of blood products? And what is everybody else doing?

What are all the other trauma centers doing? An interesting medley of anesthesia and pathology groups from the University of Chicago, a Dallas-based anesthesia group, and a blood center in my home base of St. Paul, conducted a survey of academic medical centers back in 2016. They wanted to find out how many actually had a MTP and to scrutinize the details.

They constructed a SurveyMonkey survey and sent it to hospitals with accredited pathology residencies across the US. There were 32 questions in the survey, which asked for a lot of detail. As you can probably personally attest, the longer and more complicated the survey, the less likely you are to respond. That certainly happened here. Of 107 surveys sent out, it took a lot of nagging (initial email plus two nags) to get a total of 56 back.

Bottom line: This is an intriguing snapshot of MTP practices around the country that is about six years old. Also remember, this is a somewhat skewed dataset. The survey was directed toward hospitals with academic pathology programs, not trauma centers. However, there is enough overlap that the results are probably generalizable.

Most centers are (were) using MTP packs containing six units of PRBCs, and were attempting to achieve a fixed 1:1 ratio. Half of hospitals had the same number of units in each cooler, half varied them by cooler number. Nearly half had multiple flavors of MTP for different specialties. Very few used TEG/ROTEM during the initial phased of MTP. Most modified their MTP over time.

Unfortunately, I’ve not seen a similar survey repeated recently. I’m certain that practices have changed over time as our understanding of balanced resuscitation continues to advance.

Finally, I’ve written quite a lot on most of these issues. See the links to my “MTP Week” series below.

And yes, another consultant reference card. As I wrote previously. we sometimes overuse our consultants and call then at inappropriate times. So what if we diagnose an injury in their area of expertise at 2 am? Does it need attention or an operation before morning? If not, why call at that ungodly hour?

Let’s use our consultants wisely! I’ve listed most of the common eye diagnoses that trauma professionals will encounter. There is also an indication of what you need to do, and exactly when to call your consultant.

Unfortunately, this one won’t fit on a 3×5 index card that you can keep in your pocket. I’ve included a printable pdf file, as well as the original Microsoft Word file in case you want to make a few modifications to suit your own hospital.

Trauma professionals don’t always know everything. Sometimes we have to engage a specialist in the care of our patient. And unfortunately, we don’t always know which conditions demand immediate attention and which can wait.

This can lead to overuse of our consultant colleagues and calls  at inappropriate times. So what if we diagnose an injury in their area of expertise at 2 am? Does it need attention or an operation before morning? If not, why call at that ungodly hour? Give them a break!

Let’s use our consultants wisely! I’ve listed most of the common urologic diagnoses that trauma professionals will encounter. There is also an indication of what you need to do, and exactly when to call your consultant. 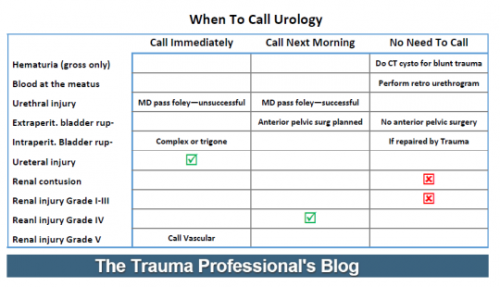 Here’s a reference sheet formatted at a 3×5 index card that you can keep in your pocket. I’ve included a printable pdf file, as well as the original Microsoft Publisher file in case you want to make a few modifications to suit your own hospital.