Facial trauma is common, especially in children. And the use of CT scan is even more common, unfortunately for children. What happens when these two events meet?

I’ve noted that many trauma professionals almost reflexively order a face CT when they see any evidence of facial trauma. This ranges from obvious deformity to lacerations to mere contusions. This seems like overkill to me, since most of the face (excluding the mandible) is visualized with the head CT that nearly always accompanies it.

Finally, someone has actually examined the usefulness of the facial CT scan! The trauma group at Albany collaborated with four other Level I trauma centers, performing a retrospective chart and database review of children (defined as less than 18 years old) who underwent both head and maxillofacial CT scans over a five year period. They excluded penetrating injuries and bites. The concordance of facial fractures seen on head CT vs face CT was evaluated.

The authors concluded that the use of head CT alone with a good clinical exam detects nearly all facial fractures requiring repair.

Bottom line: Although this study confirms my own personal bias and experience, it suffers from the usual problems associated with retrospective studies and small numbers. Nonetheless, the results are compelling. This study provides a way to identify nearly all significant fractures while minimizing radiation to the ocular lens, thyroid, and bone marrow.

The key is a good physical exam, as usual. Inspection of the teeth, occlusion testing, and manipulation of the mandible and maxilla should identify nearly all fractures that might require operation.

Once the exam is complete, a standard head CT should be obtained. Identification of displaced fractures on the head CT should prompt a consult to your friendly facial surgeon to see if they really need additional imaging to determine if the fracture requires operation. Frequently, the head CT images are sufficient and nothing further is required.

Here is the algorithm the authors recommend. Although designed for children, it should work for adults just as well. 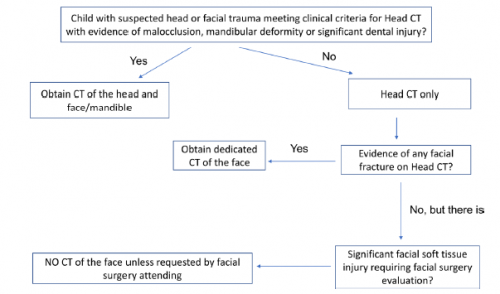 But in many ways, they recover more quickly and more completely after injury. What about after what is probably the biggest insult of all, cardiac arrest after blunt trauma? The NAEMSP and the ACS Committee on Trauma previously released a statement regarding blunt traumatic arrest (BTA):

Bottom line: Children are just like little adults when it comes to blunt cardiac arrest after trauma. Although it is a retrospective, registry-based study, this is about as big as we are likely to see. And don’t get suckered into saying “but 1.5% with no vital signs ever were discharged!” This study was not able to look at the quality of life of survivors, but there is usually significant and severe disability present in the few adult survivors after this event.

As with adults a decade ago, the incidence of venous thromboembolism (VTE) in children is now on the rise. Whereas adult VTE occurs in more than 20% of adult trauma patients without appropriate prophylaxis, it is only about 1% in kids, but increasing. There was a big push in the early 2000′s to develop screening criteria and appropriate methods to prevent VTE. But since the incidence in children was so low, there was no impetus to do the same for children.

The group at OHSU in Portland worked with a number of other US trauma centers, and created some logistic regression equations based on a large dataset from the NTDB. The authors developed and tested 5 different models, each more complex than the last. They ultimately selected a model that provided the best fit with the fewest number of variables.

The tool consists of a list of risk factors, each with an assigned point value. The total point value is then identified on a chart of the regression equation, which shows the risk of VTE in percent.

Here are the factors:

Note that the highest risk factors are age >= 13, ICU admission, and major surgery.

And here is the regression chart:

Bottom line: This is a nice tool, and it’s time for some clinical validation. So now all we have to do is figure out how much risk is too much, and determine which prophylactic tools to use at what level. The key to making this clinically usable is to have a readily available “VTE Risk Calculator” available at your fingertips to do the grunt work. Hmm, maybe I’ll chat with the authors and help develop one!

Reference: A Clinical Tool for the Prediction of Venous Thromboembolism in Pediatric Trauma Patients. JAMA Surg 151(1):50-57, 2016.

Nonoperative management of the blunt injured spleen is now routine in patients who are hemodynamically and have no evidence of other significant intra-abdominal injury.  The trauma group at the University of Arizona – Tucson scrutinized the failure rate of this procedure in children because it is not yet well established.

They reviewed 5 years of data from the National Readmission Database. This is actually a collection of software and databases maintained by the federal government that seeks to provide information on a difficult to track patient group: those readmitted to hospitals after their initial event.

Patients who had sustained an isolated spleen injury who were less than 18 years old and who had either nonoperative management (NOM), angioembolization (AE), or splenectomy were analyzed. Outcome measures included readmission rate, blood transfusion, and delayed splenectomy. Common statistical techniques were used to analyze the data.

The authors concluded that “one in seven children had failure of conservative management and underwent delayed splenectomy within 6 months of discharge.” They stated that NOM and AE demonstrated only a temporary benefit and that we need to be better about selecting patients for nonoperative management.

Hmm, there are several loose ends here. First, what is the quality of the study group? Was it possible to determine if these patients had been treated in a trauma center? A pediatric vs adult trauma center? We know that there are outcome disparities in spleen trauma care at different types of trauma centers.

Next, are they really pediatric patients? Probably not, since age < 18 were included and the average age was 14. Injured spleens in pre-pubescent children behave much better than adolescents, which are more adult-like.

And what about the inherent bias in the “readmission data set?” You are looking only at patients who were readmitted! By definition, youare looking at a dataset of poorer outcomes. What if you had identified 9,500 initial patient admissions from trauma registries and then tried to find them in the readmission set. I know it’s not possible to do that, but if it were I would bet the readmission and delayed splenectomy numbers would be far, far lower.

And what about those delayed splenectomy numbers? I can’t get the percentages to match up. If 15% of the 7965 patients who didn’t have an initial splenectomy  had it done later, how does 7.2% of the 7318 NOM patients and 5.3% of the 1541 AE patients add up?

Bottom line: The usual success rate tossed around for well-selected nonoperative management is around 93% when optional adjunctive AE is part of the algorithm. That’s a 1 in 14 failure rate, and it generally occurs during the initial hospitalization. In my experience, readmissions are very rare. And that’s for adults; children tend to behave even better!

I wouldn’t consider changing my practice yet based on these findings, but the devil will probably be in the details!

I’m anticipating a great presentation at the meeting!

Nurses have a complementary role with physicians in caring for children with orthopedic injuries. Typically, the child will have been evaluated and had some sort of fracture management implemented. In children, nursing management is easer than in adults since a child is less likely to need an invasive surgical procedure. Many fractures can be dealt with using casts and splints alone.

Here are a few tips for providing the best care for your pediatric patients: