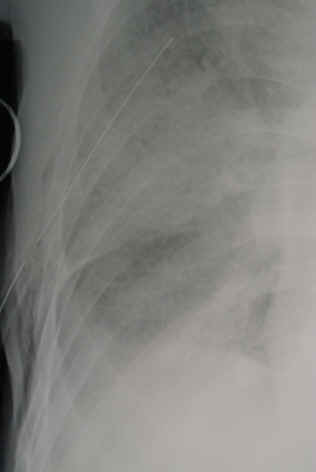 So far, I’ve looked at the only two papers in the trauma literature that examine the question of chest tube size for hemothorax. As you may recall, both were woefully underpowered. Finding no difference in a study without enough subjects does not infer that the two interventions have the same results. It simply means that a (much) better study needs to be done.

One of these papers admitted that more work needed to be done, the other did not. And the one that admitted no weaknesses has been quoted by some of the pigtail catheter studies I am reviewing this week as supporting their hypothesis. They are using it as the rationale that even small catheters might work. Hmm, faulty premises?

After reviewing the pigtail for hemothorax literature since the beginning of time, I found exactly two papers that address the issue. And really, it’s just one. The first one published in 2012 was the initial series. The numbers were expanded over the following years by the same authors, and the new data was published in 2017. Of interest, the authors cite their own early paper as supporting the effectiveness of using a pigtail catheter, even though it can’t due to very low numbers Let’s dig in.

This one comes from the group a the University of Arizona in Tucson. They prospectively collected data on pigtail catheter insertions from 2008 to 2014. The outcomes studied included initial drainage output, catheter complications, and failure rate (incomplete drainage requiring another intervention).

Tubes and pigtails were placed by attending physicians or residents. Patient selection was at the discretion of the attending surgeon. The total patient group was analyzed, and then it was split into emergent placement vs non-emergent placement. Here are the factoids:

The authors state the their study “clearly demonstrates favorable outcomes in pigtail catheter usage.” But does it?

Bottom line: Once again, this is a completely underpowered study. The pigtail results would need to be 2-3 times better than chest tube results to show any statistical significance. But they are not. So being non-inferior doesn’t mean anything with such small numbers. However, if you properly power a study that shows no differences, then they truly are equivalent. But with the work available to date, you can’t just run out and start using pigtails because they are “as good as” chest tubes.

There were a few statistically significant differences in this study, but again this is clouded by other design problems. The emergent group had significantly more initial output through the pigtails. This is odd from a fluid dynamics point of view. How do you get more of a thick liquid to drain from a tiny tube?

One potential explanation is the ability to more accurately measure the initial output in the pigtail group. When a chest tube is inserted, there is frequently some blood loss on the bed which is difficult to estimate. But when a pigtail is inserted there is almost never any leakage. It all comes out through the tube. Could the excess pigtail drainage be accounted for by external loss during chest tube placement?

The real bottom line: There are a grand total of three published papers in the past seven years that have tried to deal with tube size in traumatic hemothorax. All of them are completely underpowered and rely on the lack of significant differences to tout that they are equivalent. The real answer is: we don’t know. This is certainly not the quality of data you want to use to change your practice. We don’t know for sure if smaller tubes and pigtails result in more retained hemothoraces or followup procedures. So buyer beware! If you choose to use small tubes or pigtails in your patients, you are in uncharted territory. The first author of the 2012 small tube paper even stated that a larger multi-center is needed. I completely agree! Meanwhile, I’ll stick to big (36 Fr) and bigger (40 Fr) for hemothorax.

In my last post, I reviewed a large prospective series comparing smaller (28-32 Fr) to larger (36-40 Fr) chest tubes for management of pneumothorax. The authors did not detect any significant difference because the study was underpowered given the incidence of the adverse events examined.

Today, I’ve chosen a more recent paper that attempts to do the same thing. Interestingly, it cites the previous paper as a good example showing no differences! This one is from an emergency medicine group in Fukui, Japan. It is a retrospective review of seven years worth of patients who had a chest tube inserted for hemothorax only.

The authors concluded that “emergent insertion of the small-bore tubes had no difference in efficacy of drainage, complications or need for additional invasive procedures.”

Bottom line: Huh? Once again we have an inferior design (retrospective review) and huge potential for selection bias (no criteria or randomization for tube size). But in this case, the tube sizes are very similar! The difference in diameter between a 20 Fr tube and a 28 Fr one is only 2.5mm! Reason #1 for no apparent differences.

For reason #2, look at the sample size. First of all, this hospital placed only 124 tubes in 7 years. That’s a one tube every three weeks. Is there that little chest trauma, or is a chunk of data missing? This sample size is less than half of that in the previous post, so the statistical power is far weaker. Look at the stats above for additional tube placement. A 3.5x change was not even close to being statistically significant. In fact, this sample size would not show a significant difference for retained hemothorax until one group had nearly 8x the number! No wonder the authors assumed there was no difference. The study was not designed in such a way that it could ever show one!

So throw this study in the trash bin, too. I’ll continue my search for a more convincing “size matters” paper in my next post.

And if you think you’ve got one, send it my way so I can have a look!