You are seeing a young man in the emergency department who gives a history of falling two days ago. He experienced chest pain at the time which has persisted, but he did not immediately seek medical care. He has noticed that he now gets winded when walking quickly or climbing stairs, and describes pleuritic chest pain.

He presents to your emergency room and on exam has a bruise over his left lateral chest wall. Subcutaneous emphysema is present, and breath sounds are absent. Chest x-ray shows a complete pneumothorax on the left.

You carefully prepare and insert a chest tube in the usual position. A significant rush of air occurs, which tapers off over 15 seconds. Here is the followup image: 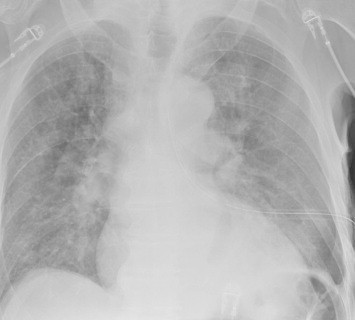 About 10 minutes later you are called to his room because he is complaining of dyspnea and his oxygen saturation has decreased to 86%. Breath sounds are somewhat decreased and the tube appears to be functioning properly. You immediately obtain another chest x-ray:

What just happened? This is a classic case of unilateral “flash” pulmonary edema after draining the chest cavity. This phenomenon was first described in 1853 in a patient who had just undergone thoracentesis. It is very uncommon, but seems to occur after rapid drainage of air or fluid from the chest cavity.

Here are some interesting factoids from case reports:

What should you do? First, if you are draining a large collection of air or blood, do it slowly. Clamp the back end of the chest tube prior to insertion (you should always do this if you value your shoes) and use it to meter the amount of fluid or air released. I typically let out about 300cc of fluid, then wait a minute and repeat until all the blood has been drained. For air, vent it for 10 seconds, then wait a minute and repeat.

In patients at high risk for this condition, apply pulse oximetry and follow for about an hour. If they still look and feel great, nothing more need be done.

Deciding when to place a chest tube can be challenging. Sometimes, it’s obvious: there is a large hemo- or pneumothorax staring you in the face on the chest x-ray. But sometimes, it’s there but “not that big.” The real question is, how big is too big.

That’s a question that’s been very difficult to quantify. The authors of this abstract, from the Medical College of Wisconsin, conducted a six-year retrospective review of every patient with an isolated pneumothorax at their Level I trauma center. Based on their previous research, a 35mm threshold was used to stratify patients into two groups. This measurement was obtained from axial images of a CT scan. Statistical analysis was performed to identify the predictive value in determining whether the patient could be managed without a chest tube.

Bottom line: Not so fast! Although this looks like a slam dunk abstract, it’s really not. First, many (or most?) pneumothoraces are initially diagnosed using a plain old chest x-ray. A 35mm measurement is meaningless here because there can be significant changes in position of the pneumothorax on the image. Sometimes, the air is located anteriorly with little or no lateral component.  Does this mean we should CT every patient with a known or suspected pneumothorax? I think not.

And the second issue is the subjectivity surrounding the definition of a failure. What criteria were used when the tube was actually placed in this series. If every patient had to become symptomatic first, then I might agree. But I suspect the tubes were placed when followup imaging showed that the air was just “too big.” You can’t statistic away this kind of potential bias from subjectivity.

So what’s the answer? Unfortunately, there still isn’t one. The need for a chest tube must still be based on subjective size on a chest x-ray, physiologic status, and the patient’s ability to tolerate a given amount of lost lung function. It continues to boil down to the  assessments of each trauma professional as to “how big is too big.” 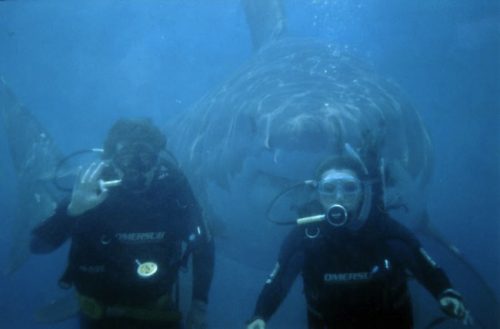 Finding pneumomediastinum on a chest xray or CT scan always gets one’s attention. However, seeing this condition after a simple fall from standing is very simple to evaluate and manage.

There are 3 potential sources of gas in the mediastinum after trauma:

Blunt injury to the esophagus is extremely rare, and probably nonexistent after just falling down. Likewise, a tracheal injury from falling over is unheard of. Both of these injuries are far more common with penetrating trauma. 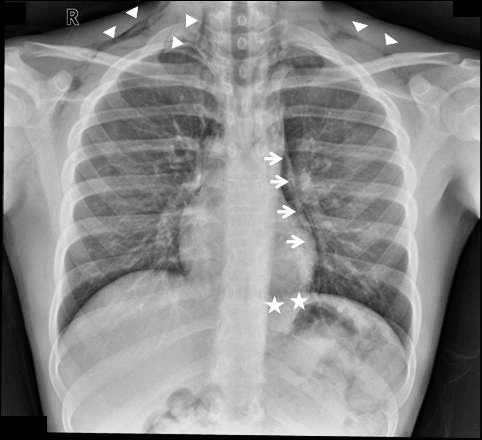 Management is simple: a repeat chest xray after 6 hours is needed to show non-progression of any pneumothorax, occult or obvious. This image will usually show that the mediastinal air is diminishing as well. There is no need for the patient to be kept NPO or in bed. Monitor any subjective complaints and if all progresses as expected, they can be discharged after a very brief stay.

Tomorrow: A more interesting (and complicated) case of pneumomediastinum.