After yesterday’s analysis of a not-so-good pan-scan vs selective-scan abstract, it’s time for a little philosophy today. There seem to be two camps in the world of initial diagnostic testing for trauma: selective scanning vs scan everything. I admit that I am one of the former. Yes, the more tests you do, the more things you will find. Some will be red herrings. Some may be true positives, but are they important? Here’s the key question:

“If a tree falls in a forest and no one is around, does it make a sound?” 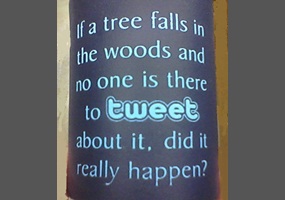 There is a clinical corollary to this question in the field of trauma:

“If an injury exists but no one diagnoses it, does it make a difference (if there would be no change in treatment)?”

Here’s an example. On occasion, my colleagues want to order diagnostic studies that won’t make any clinical difference, in my opinion. A prime example is getting a chest CT after a simple blunt assault. A plain chest xray is routine, and if injuries are seen or the physical exam points to certain diagnoses, appropriate interventions should be taken. But adding a chest CT does not help. Nothing more than the usual pain management, pulmonary toilet, and an occasional chest tube will be needed, and those can be determined without the CT.

Trauma professionals need to realize that we don’t need to know absolutely every diagnosis that a patient has. Ones that need no treatment are of academic interest only, and can lead to accidental injury if we look for them too hard (radiation exposure, contrast reaction, extravasation into soft tissues to name a few). This is how we get started on the path to “defensive medicine.”

Bottom line: Think hard about every test you order. Consider what you are looking for, what you might find, and if it will change your management in any way. If it could, go ahead. But always consider the benefits versus the potential risks, or what I call the “juice to squeeze ratio.”

In major adult blunt trauma, there are still two factions: those who pan-scan for diagnosis, and those who use CT selectively. The pan-scan proponents argue that they find everything, including things that would have been missed with selective scanning. The selective scanners argue that those things are typically not clinically significant, and radiation exposure is reduced.

Who is right? We’re still not sure. But when it comes to children, most believe that less radiation is always better. The group at USC decided to look at their experience with pan-scan vs selective imaging in blunt pediatric trauma patients, defined as those < 16 years of age. They reviewed their experience over a three year period, excluding those who had low blood pressure (<90). A total of 648 children met these criteria, and an array of variables were analyzed to try to determine “superiority.”

Bottom line: Ugh! This is not a good abstract. It shows association, but not causation with anything but the radiation exposure calculations. Yes, if you scan less in the selective arm, there better be less exposure. But the other variables are either not clinically significant, or not defined well (i.e. morbidity).

The authors conclude that selective scanning is the way to go based on this (extremely weak) data. This is why I always recommend that you read the whole paper, not just the abstract, or in this case the whole abstract and not just the conclusion. The data, as presented in this abstract, do not support this at all.

The authors don’t say how many of these patients were very young, and how many of them actually received pan-scans. But any pediatric trauma surgeon would cringe if they read this  article. Although you may be a big believer in pan-scanning, reserve it for adults only until we have some better data. Don’t irradiate kids unnecessarily!

Spine trauma is one of the high-risk indicators for deep venous thrombosis (DVT). Unfortunately, there is a great deal of variability in the start time for chemical prophylaxis for this injury, especially after the patient has undergone surgery. In part, this is due to a lack of good literature and guidelines, and in part due to the preferences of the spine surgeons who operate  on these patients.

A group at the University of Arizona in Tucson performed a large database review (looks like National Trauma Databank, although they don’t say in the abstract) looking at “early” vs “late” administration of prophylaxis after surgery in these patients. The spine injury was the predominant one, with all other systems having an abbreviated injury score (AIS) < 3. They matched two years worth of patients for demographics, initial vitals, type of operative intervention, and type of heparin to assess the impact of prophylaxis timing.

Bottom line: Once again, we see that “early” prophylaxis for DVT is probably desirable and mostly harmless, even after a spine operation. Many surgeons still have an irrational fear of giving heparin products in patients who have some risk of bleeding. The body of literature that supports early use just keeps growing. One observation, though: as in most other studies, pretty much whatever we do for DVT has a negligible impact on PE and mortality. We can only treat the clots, but not their major aftermath.

Most US trauma centers have two tiers of trauma activation. The higher tier is typically called for physiologic derangements like hypotension, tachypnea, or decreased mental status. This triggers arrival of the full trauma team for rapid assessment and management.

The second tier is reserved for patients who may be less seriously injured and usually results in a reduced team. And depending on how good the activation criteria for this tier are, many patients eventually turn out to have no serious injuries and are discharged from the emergency department. This is the purest form of overtriage, and if it occurs frequently, can wear down your trauma team and waste resources.

Criteria for the second tier trauma activation may include mechanism of injury criteria such as ejection, pedestrian struck, intrusion into the passenger compartment, death at the scene, and other similar criteria. They sound like good criteria, but how helpful are they, really? The group at Baylor University Medical Center in Dallas performed a retrospective review of their trauma activations over a one and a half year period to test the efficacy of some of these criteria. They had recently added some mechanism-based criteria to their second tier activations.

Bottom line: Trauma centers are encouraged to review their trauma triage criteria periodically, especially when overtriage rates are high. This center is presenting a nice paper that shows the benefit of doing this. They identified four mechanistic criteria that do not appear to be any better than just relying on physician discretion. What they are not saying is that it is probably better to rely on physiologic and anatomic criteria, as well as physician discretion, to determine which level of trauma activation to trigger.

And incidentally, the new ACS highest-level criterion of gunshot proximal to knee or elbow may not be everything its cracked up to be. It’s difficult to say for sure because stabs and gunshots were not separated out in this abstract, and the number they encountered was not specified. But it certainly suggests this criterion needs some fine-tuning as well.

About 2.3 million people, or a bit less than 1% of the US population, have atrial fibrillation. This condition is commonly managed with anticoagulants to reduce the risk of stroke. Unfortunately, the elderly represent a large subset of those with a-fib. And the older we get, the more likely we are to fall. About half of those over 80 will fall once a year.

Are all of these elderly patients being treated with anticoagulants appropriately? Several scoring systems have been developed that allow us to predict the likelihood of ischemic stroke. Looking at it another way, they allow us to judge the appropriateness of using an anticoagulant to prevent such an event.

The original CHADS2 score was developed using retrospective Medicare data in the US. The newer CHA2DS2-VASC score used prospective data from multiple countries. However, the accuracy is about the same as the original CHADS2 score. But because the newer system has three more variables, it adds a few more people to the high-risk group who should receive an anticoagulant.

The higher the CHA2DS2-VASC score, the more likely one is to have an ischemic stroke. The threshold to justify anticoagulation seems to vary a bit, with some saying >1 and others going with >2. Here’s a chart that shows how the stroke risk increases.

Whereas CHA2DS2-VASC predicts the risk of clotting (ischemic stroke), the HAS-BLED score looks at the risk of bleeding. It includes clinical conditions, labile INR, and concomitant use of NSAIDs, aspirin or alcohol, but not a history of falls.

Proper management of atrial fibrillation in the elderly must carefully balance both of these risks to reduce potential harm as much as possible. A HAS-BLED score of >3 indicates a need to clinically review the risk-benefit ratio of anticoagulation. It does not provide an absolute threshold to stop it.

A group at Henry Ford Hospital in Detroit, a Level I trauma center, retrospectively reviewed their experience with patients who fell while taking an anticoagulant for atrial fibrillation. They calculated CHA2DS2-VASC and HAS-BLED for each and evaluated the appropriateness of their anticoagulation regimen.

Bottom line: The authors found that their population was appropriately anticoagulated. But they also noted that the morbidity and mortality risk was high, and was independent of age and comorbidities.

There are tools available to help us judge whether an elderly patient should be taking an anticoagulant for atrial fibrillation. The tool for predicting bleeding risk, however, is not as good for trauma patients. It ignores the added risk from falling, which is very common in the elderly.

Every patient admitted to the trauma service after a fall should have a critical assessment of their need for anticoagulation. The specific drug they are taking (reversible vs irreversible) should also be examined. If there is any question regarding appropriateness, the primary care provider should be contacted personally to discuss and modify their drug regimen. Don’t just rely on them reading the hospital discharge summary. Falls can be and are frequently fatal, just not immediately. Inappropriate use of anticoagulants can certainly contribute to this problem, so do your part to reduce that risk.

Reference: Falls, anticoagulation, and the elderly: are we inappropriately treating atrial fibrillation in this high-risk population? JACS 225(4S1):S53-S54, 2017.