For decades, plasma (with vitamin K) was the mainstay for reversing warfarin. Over the past several years, prothrombin complex concentrates (PCC) have made inroads in the management of this problem because of its sheer speed of action.

There are two problems with plasma. First, most hospitals still have only fresh frozen plasma (FFP), and it takes 20-30 minutes to thaw. This adds some up-front time to administration. Then, it takes time to infuse the 250cc or so of volume in each unit. This may be 1 or 2 hours, depending on policy and patient tolerance of a bolus of colloid.

If it always just took one unit of plasma to correct the INR to a desirable range (typically 1.5-1.6), then the whole PCC conversation might be moot. You could potentially have the INR corrected in 30-60 minutes depending on your patient’s cardiovascular system.

But how many does it really take? A group at Eastern Virginia Medical School in Norfolk, VA looked at this problem and tried to come up with a mathematical formula. They examined a year of warfarin reversal data at their hospital. Patients with severe clotting disturbances (advanced cirrhosis, DIC) and those who received additional products (PCC or activated Factor VII) were excluded.

Using data from nearly 1,000 patients, the following formula was derived and validated:

So a patient with an INR of 3.0 would be expected to show a decrease of 0.99 to about 2.0 after one unit. This formula can be used iteratively to figure out how many units will drop the INR to the goal range.

I don’t know about you, but I hate doing math in the middle of a trauma resuscitation. I need something quick and dirty. A physician from NYU Langone in NYC commented on the article, and derived a nice little table to simplify the process. He calculated the number of plasma units based on some common INR ranges, assuming that the goal was to get it down under 1.5. Here is the table: 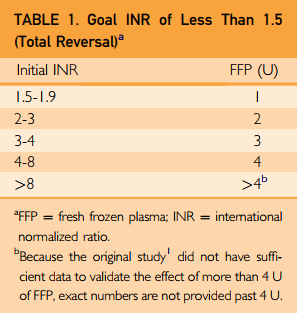 Bottom line: This is a nice little piece of information to tuck into your pocket or phone. For patients inside the usual therapeutic values, it will take 2-3 units of plasma to reverse. For your average older human with average comorbidities, expect this to take 4-6 hours, not counting ordering, thawing, and delivery. If my definitions of “life-threatening bleeding” are met (see below), your patient may have significant adverse events during this time frame. So think very seriously about using PCC instead.

About 2.3 million people, or a bit less than 1% of the US population, have atrial fibrillation. This condition is commonly managed with anticoagulants to reduce the risk of stroke. Unfortunately, the elderly represent a large subset of those with a-fib. And the older we get, the more likely we are to fall. About half of those over 80 will fall once a year.

Are all of these elderly patients being treated with anticoagulants appropriately? Several scoring systems have been developed that allow us to predict the likelihood of ischemic stroke. Looking at it another way, they allow us to judge the appropriateness of using an anticoagulant to prevent such an event.

The original CHADS2 score was developed using retrospective Medicare data in the US. The newer CHA2DS2-VASC score used prospective data from multiple countries. However, the accuracy is about the same as the original CHADS2 score. But because the newer system has three more variables, it adds a few more people to the high-risk group who should receive an anticoagulant.

The higher the CHA2DS2-VASC score, the more likely one is to have an ischemic stroke. The threshold to justify anticoagulation seems to vary a bit, with some saying >1 and others going with >2. Here’s a chart that shows how the stroke risk increases.

Whereas CHA2DS2-VASC predicts the risk of clotting (ischemic stroke), the HAS-BLED score looks at the risk of bleeding. It includes clinical conditions, labile INR, and concomitant use of NSAIDs, aspirin or alcohol, but not a history of falls.

Proper management of atrial fibrillation in the elderly must carefully balance both of these risks to reduce potential harm as much as possible. A HAS-BLED score of >3 indicates a need to clinically review the risk-benefit ratio of anticoagulation. It does not provide an absolute threshold to stop it.

A group at Henry Ford Hospital in Detroit, a Level I trauma center, retrospectively reviewed their experience with patients who fell while taking an anticoagulant for atrial fibrillation. They calculated CHA2DS2-VASC and HAS-BLED for each and evaluated the appropriateness of their anticoagulation regimen.

Bottom line: The authors found that their population was appropriately anticoagulated. But they also noted that the morbidity and mortality risk was high, and was independent of age and comorbidities.

There are tools available to help us judge whether an elderly patient should be taking an anticoagulant for atrial fibrillation. The tool for predicting bleeding risk, however, is not as good for trauma patients. It ignores the added risk from falling, which is very common in the elderly.

Every patient admitted to the trauma service after a fall should have a critical assessment of their need for anticoagulation. The specific drug they are taking (reversible vs irreversible) should also be examined. If there is any question regarding appropriateness, the primary care provider should be contacted personally to discuss and modify their drug regimen. Don’t just rely on them reading the hospital discharge summary. Falls can be and are frequently fatal, just not immediately. Inappropriate use of anticoagulants can certainly contribute to this problem, so do your part to reduce that risk.

Reference: Falls, anticoagulation, and the elderly: are we inappropriately treating atrial fibrillation in this high-risk population? JACS 225(4S1):S53-S54, 2017.

Yesterday I posted an image of an unusual chest CT. The patient had been involved in a motorcycle crash weeks ago, and presented with new onset chest pain and weakness.

Exam of the chest showed a hint of diffuse swelling on the left side and moderate tenderness. Chest x-ray suggested a mild effusion on the left. I showed one slide of the CT yesterday, which showed a large amount of complex material in the chest wall. This is most likely a mixture of blood and clot.

Here is another slice of the CT that is more revealing: 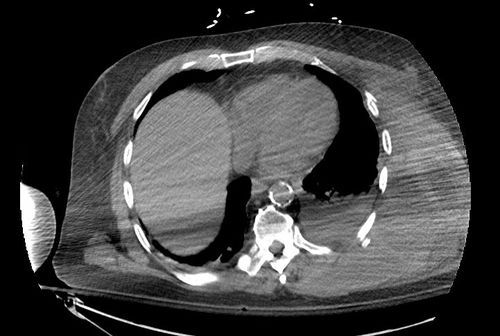 Now you can see that there are multiple rib fractures present. While comparing the original and the recent scan, it is apparent that the fractures are more displaced on the recent one. Upon closer questioning the patient admits that he did fall down the day before the new pain and swelling occurred.

And by the way, he forgot to mention the fact that he had developed deep venous thrombosis and was taking warfarin! And also by the way, his blood pressures were becoming a bit soft.

I would consider this life-threatening bleeding! Crystalloid and blood resuscitate immediately. Reverse the anticoaguation quickly, using prothrombin complex concentrate (PCC, preferably 4-factor). Then send him to interventional radiology to see if there are any active bleeders that can be embolized. Finally, it’s off to the ICU to finish up the resuscitation and restore him to normal!

Yesterday I published a protocol that Regions Hospital uses for rapid reversal of warfarin in patients with life-threatening bleeding. This is very useful in trauma patients, but a number of other specialties use it as well (GI, etc). But what about that patient who doesn’t have a major bleeding problem, but needs emergency surgery or some invasive procedure? If something isn’t done prior to the case, the surgeon or interventionalist may inflict life-threatening bleeding!

We use a variant of the protocol I posted yesterday. The differences arise from the fact that, in this case, there is a little bit of time to find out some of the patient’s medical history. Certain things may modify the protocol, or contraindicate it entirely, such as:

Again, feel free to download this protocol and modify it as you wish. Comments and questions are welcome!

Everybody is looking for good algorithms. They’re very helpful in standardizing care and they are a great teaching tool to show one good way to do something. All trauma centers have at least a few, like the Massive Transfusion Protocol.

Well, as the population ages and more of our elders are placed on drugs like warfarin, they run the risk of life-threatening bleeding if an accident occurs. Why reinvent the wheel? Don’t spend the time combing through the literature and designing your own protocol if someone else has already done the leg work!

Here’s a copy of our protocol for rapid reversal of warfarin with prothrombin complex concentrate (PCC) when life-threatening bleeding is present (e.g. blood in the head). Please note that the INR must be 2 or above to use this protocol, or the risks of giving the drug begin to outweigh the benefits.

Once the patient is found to be eligible, a single dose of PCC based on INR is given, as well as 10mg of vitamin K. The INR usually returns to near normal within about 30-45 minutes. If it’s still elevated, then begin administering plasma.

Feel free to copy and share. Also, any and all comments are welcome!