MRI is an indispensable tool for evaluation of spine and soft tissue trauma. However, a great deal of effort was be made to ensure that any patient scheduled for this test is “MRI compatible.” The fear is that any retained metallic fragments may move or heat up once the magnets are activated. 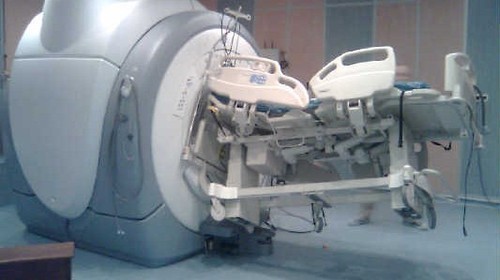 But what about trauma patients with external fixators? That is one big hunk of metal that is inserted deep into your patient. There are three major concerns:

The biggest challenge is that there is no standard ex-fix configuration. Our orthopaedic colleagues get to unleash their creativity trying to devise the appropriate architecture to hold bones together so they can heal properly. This makes it difficult to develop standardized guidelines regarding what can and can’t go into the scanner.

However, there is a growing body of literature showing that the heating effects are relatively small, and get smaller as the distance from the magnet increases. And non-ferromagnetic materials move very little, if at all, and do not interfere with the image. So as long as nonferromagnetic materials are used, the patients are probably safe as long as basic principles are adhered to:

Bottom line: MRI of patients with external fixators can be safely accomplished. Consult your radiologists and physicists to develop a policy that is specific to the scanners used at your hospital.

In 2015, EAST published their practice guidelines for spine clearance in the obtunded blunt trauma patient. Click here to view them. They stated that a high-quality CT scan can be used to remove (clear) the cervical collar in these patients. This avoids the use of the expensive and personnel-intensive MRI clearance.

The group at UCSF used the NTDB to review the use of MRI in such patients over an 11 year period. They focused on comatose patients (GCS < 8) with an AIS head > 3 and intubation for more than 72 hours. They used logistic regression to equalize confounders while examining the use of MRI over time, before and after the guidelines were published.

The authors concluded that spinal MRI use has been increasing since 2007 despite publication of the EAST guideline.

My comments: To me, this indicates one of the following:

I suspect that it is #2. For some reason, trauma programs insist on doing it their own way despite what decent evidence shows. I think that this represents a defense mechanism to minimize the cognitive dissonance that comes with defying what is published in the literature.

I always encourage programs to borrow/steal what is already out there when crafting their own practice guidelines. Someone else has already done the work, why not take advantage of it? Typically, it’s just an excuse to continue doing things the way they’ve always been done.

This incessant reinventing the wheel becomes tiresome. And for once, I don’t have many questions or suggestions for the authors. Their evidence is pretty well laid out.

My questions for the author / presenter are:

To everyone else, I say “get over yourself and read the literature!”

Reference: Assessing the e3ffect of the EAST guideline on utilization of spinal MRI in the obtunded adult blunt trauma patient over time. EAST 2021, Paper 7.

There is a fairly robust  amount of data that shows that, properly performed, the cervical spine can be cleared using a high quality CT read by a highly skilled radiologist. This is true even for obtunded patients. Pooled data suggest that the miss rate in this group is only 0.017%. And MRI is not perfect either, missing significant ligamentous injury in a small number of patients.

But it seems that some trauma professionals are still using MRI in some cases despite this data. The latest study on MRI focuses on the cost-effectiveness of the technique. The authors selected patients with GCS < 13 to be their obtunded group, which is probably a bit high. Nevertheless, they used a fairly sophisticated (meaning hard to understand) modeling-based decision analysis using a computerized simulation. This allowed them to compare different clearance strategies without performing large randomized clinical trials.

Bottom line: Yes, this is a fairly heavy computer simulation. But the reality is that we will never be able to design a large enough study to critically evaluate this issue and have it pass any IRB review. So it’s probably as good as it will ever get. It’s time to stop wasting money and putting obtunded patients in harm’s way by locking them into a relatively inaccessible MRI scanner for 30 minutes just to confirm the CT. Or keeping a collar until until the skin breaks down.

Here is a copy of the practice guideline we use for clearing all cervical spines, obtunded or not. Yes, there is some weirdness with soft collars, which mainly serve as a reminder to re-examine the patient at some point. But note the scan technique and requirement that it be read by a neuroradiologist for final clearance.

Has this happened to you? A patient with a serious head injury is not waking up as expected. There were a few punctate hemorrhages seen on the initial CT scan. Your neurosurgery colleague orders an MRI to “provide a prognosis on the patient’s injury.”

Is this a legitimate request? Sure, MRI is very sensitive at detecting very small hemorrhages that may signal the presence of diffuse axonal injury (DAI). But do more abnormalities on MRI equal a poorer prognosis or longer recovery time?

A group from Vanderbilt presented their data from a retrospective cohort study at EAST earlier this year.  They reviewed 7 years of data from 2006 to 2012, including all patients with a head CT positive for intracranial injury and an MRI within 2 weeks. They excluded penetrating injuries and patients with psychiatric or neurologic disorders. They analyzed information on three year mortality, functional outcome, and quality of life.

Bottom line: This is a relatively large study, but there are still several weaknesses that could skew the numbers a bit. However, it appears that MRI for prognostication of outcomes in patients with clinical DAI is not very helpful. First, only about half with a clinical picture of DAI showed it on MRI. And sure, MRI may tell us a little bit about their status when they are discharged from the hospital to rehab or transitional care. But is that information very useful? It certainly does not help predict their outcome in the longer term. So why order an expensive and difficult study (think restraints, sedation, lots of pumps and monitors) to tell us what we already know based on our experience with severe TBI?