Deciding when to place a chest tube can be challenging. Sometimes, it’s obvious: there is a large hemo- or pneumothorax staring you in the face on the chest x-ray. But sometimes, it’s there but “not that big.” The real question is, how big is too big.

That’s a question that’s been very difficult to quantify. The authors of this abstract, from the Medical College of Wisconsin, conducted a six-year retrospective review of every patient with an isolated pneumothorax at their Level I trauma center. Based on their previous research, a 35mm threshold was used to stratify patients into two groups. This measurement was obtained from axial images of a CT scan. Statistical analysis was performed to identify the predictive value in determining whether the patient could be managed without a chest tube.

Bottom line: Not so fast! Although this looks like a slam dunk abstract, it’s really not. First, many (or most?) pneumothoraces are initially diagnosed using a plain old chest x-ray. A 35mm measurement is meaningless here because there can be significant changes in position of the pneumothorax on the image. Sometimes, the air is located anteriorly with little or no lateral component.  Does this mean we should CT every patient with a known or suspected pneumothorax? I think not.

And the second issue is the subjectivity surrounding the definition of a failure. What criteria were used when the tube was actually placed in this series. If every patient had to become symptomatic first, then I might agree. But I suspect the tubes were placed when followup imaging showed that the air was just “too big.” You can’t statistic away this kind of potential bias from subjectivity.

So what’s the answer? Unfortunately, there still isn’t one. The need for a chest tube must still be based on subjective size on a chest x-ray, physiologic status, and the patient’s ability to tolerate a given amount of lost lung function. It continues to boil down to the  assessments of each trauma professional as to “how big is too big.”

Most stable patients with blunt trauma undergo CT scanning these days. Hopefully, it’s done thoughtfully to optimize the risk/benefit ratio using a well-designed imaging protocol. The majority of these torso imaging protocols call for the use of IV contrast. But as I’ve written before, this can pose risks, especially to the elderly and others who have some degree of renal impairment.

Unfortunately, I occasionally encounter scans done at other hospitals that omit the use of contrast. This usually hinders diagnosis significantly. And it’s usually not clear why this happened, so let’s think about it a bit.

The use of contrast in CT is designed to show blood, or things that are filled with lots of blood. Specifically, a great deal of detail about the blood vessels and solid organs is displayed.

Let’s break it down by type of scan:

Bottom line: Pretty much any CT of the chest, blood vessels, or abdomen/pelvis must have IV contrast injected for accurate diagnosis. But what if your patient is old, or is known to have some degree of renal impairment? First, decide if you can wait until a point of care or standard creatinine measurement is done. If you can, use the result to do your own risk/benefit calculation. Is the injury you are worried about potentially life-threatening AND reasonably likely? Are there other less harmful ways to detect it? Then use them. And if you really do need the study in a patient with renal dysfunction, give the contrast, monitor the serum creatinine regularly, and do what you can to optimize and protect their renal function over the next several days.

There are generally three ways to share radiographic images with your upstream trauma center:

Is a web-based solution worth it? MetroHealth in Cleveland looked at this over five years ago, and published their results in 2015. They looked at their experience pre- and post-implementation and found the following:

Bottom line: As a referring hospital, it is your responsibility to ensure that the (hopefully) few images you obtain make it to the upstream trauma center. Although hard copy (CD) is the cheapest, it is also the least reliable. Work with your radiology and IT departments to determine which electronic solution is best for you. Some states and regional trauma systems help subsidize or provide a web-based solution for their member hospitals.

In my last post, I described the two types of solid organ “blushes.” I also described my thoughts on the natural history of these findings. Now, a multicenter study on the natural progression of the splenic “blush” has just been published. I found this paper very interesting, because it challenged some of my own existing beliefs. But once I read it, my enthusiasm faded.

The Western Trauma Association sponsored a multicenter (17 Level I and II centers) review of data collected prospectively over an unspecified period of time. Patients were excluded if their injury was older than 24 hours, if they had a previous splenic injury, and if they had any number of diseases or hereditary conditions that might affect the spleen. Strict definitions of nonbleeding and actively bleeding injuries were applied, and detailed information on intervention and outcomes was collected. 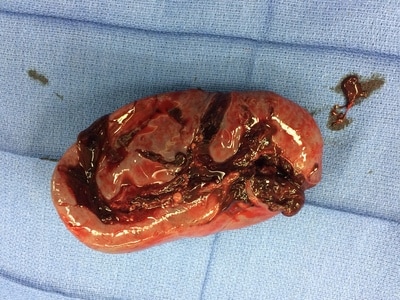 Bottom line: This paper just doesn’t do it for me. The biggest problem is that it is what I call a “we do it the way we do it” study. It examines how 17 different centers evaluate and treat patients with significant splenic injury. There was no guidance or guideline on how to treat, so they each did it their way. And the number of patients was small.

They don’t tell us anything about the use or effectiveness of angio by grade. Or whether the specific hospitals routinely rely on angio rather than just going to the OR for high grade injuries (typically if angio response times are long).

Unfortunately, this paper gives the appearance of containing a lot of interesting stuff. But a 15% initial splenectomy rate is not a “rare event” in my book. Everything published here is at odds with what I’ve observed over the years for centers with well developed management guidelines and easy access to angio (< 5% splenectomy rate in hemodynamically stable patients with nonoperative management).

My recommendation is to send all stable patients with pseudoaneursym and/or extravasation to angio immediately! Yes, some will have nothing found by the time they get to angio, and you’ll have to come up with a plan at that point. But most have something wrong, and it won’t stop until it’s been plugged up (or your patient bleeds to death, whichever comes first)!

This article has all the right buzzwords: multicenter, prospective data, etc. But it’s already been moved to my recycle bin.

Two days ago, I discussed getting the traditional chest x-ray routinely after chest tube insertion. The answer was yes, it is important even if it appears to be functioning correctly. But yesterday, I also showed you how the chest x-ray can lie. 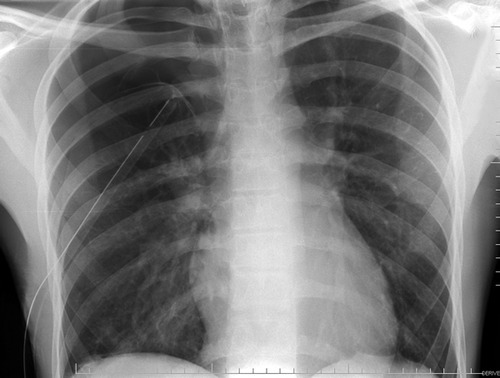 Looks perfect! But it’s a 2-D view and you don’t know where the tube is in the anterior-posterior axis. It turns out to be in the patient’s subcutaneous tissues of his back, near his scapula!

So what if this is a trauma activation patient and you are getting ready to send your patient for a chest CT shortly? Should you follow the usual dogma and still get a conventional chest x-ray prior to leaving the trauma bay?

The answer is no! Typically, your trauma activation patient should have rapid access to the CT scanner, so you won’t have to wait very long. And the additional 3-D information is very helpful in making sure the tube is placed exactly where you want it.

Bottom line: If you are planning on obtaining a chest CT anyway in your trauma patient, don’t bother with a conventional chest x-ray first to check chest tube position. But DON’T order a chest CT for this reason alone! Remember, the chest CT is only for detecting aortic injury in blunt trauma. It should not be used for diagnosing fractures, hemothorax, or pneumothorax. Or chest tube position!

Sign up to receive the Trauma MedEd Newsletter, and get a free copy of my report on how to stay current. The newsletter is released every 1-2 months, and delivers four pages packed with trauma information you absolutely need to know! Subscribers get it a week before it’s released on the website. Click the image to subscribe!
Next issue (May): Coronavirus Part 2