Diaphragm injury from blunt trauma is uncommon, occurring in only a few percent of patients after high energy mechanisms. They usually occur on the left side, and are more frequently seen after t-bone type car crashes and in pedestrians struck by a car.

Blunt diaphragm injury on the right side is very unusual. Even so, it is more easily detected due to obvious displacement of the liver that can be seen on chest x-ray. Blunt injuries on the right side usually result in a large rent in the central tendon, or detachment of the diaphragm from the chest wall. This allows the liver to herniate into the chest, and the chest x-ray finding is not subtle. 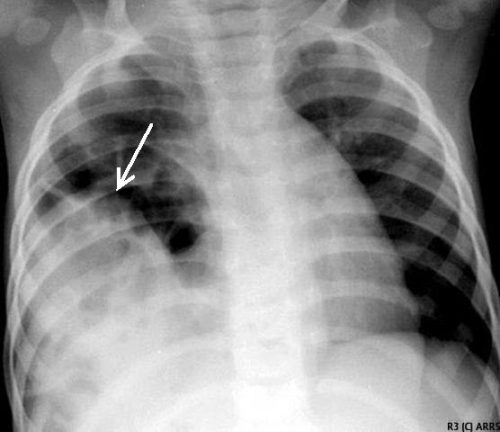 This image shows an acute herniation of the liver through the diaphragm. Due to the size of the liver, only part of it can typically fit through the rent. Radiologists call this the “cottage loaf” sign. Why? Here’s the bakery item it is named after. Get it now? 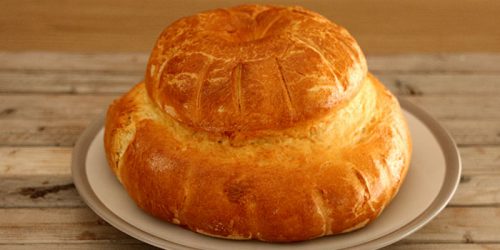 Thankfully, most of these injuries are identified in the acute setting. They must be addressed surgically because, if left untreated, more and more of the liver will slowly move into the chest resulting in respiratory problems in the long run.

Acute management usually consists of laparotomy to address both the diaphragm tear and any other associated intra-abdominal injuries. The liver should be reduced by sliding a hand next to it laterally into the chest cavity and pushing the dome downwards. The right triangular ligaments should be taken down (if they are not already destroyed) to mobilize the organ better so the diaphragm laceration can be closed. This is typically accomplished with some type of large (size 0) permanent suture. A chest tube will be needed to evacuate the iatrogenic pneumothorax created by opening the abdomen.

Chronic right diaphragm injuries are a different animal entirely. There is no longer any need to evaluate for intra-abdominal injury, so the procedure is usually performed through the chest. For smaller injuries, thoracoscopic procedures have been described that push the liver downwards and then either suture the diaphragm primarily or (more likely) incorporate a piece of mesh.

Larger injury requires conversion to an open procedure so more muscle power can be used to push the liver downwards to facilitate the repair. However, do not underestimate the adhesions that will be present between diaphragm and liver (and possibly the lung) in long-standing injuries. It may take some time to dissect them away. Rarely, a laparotomy (or laparoscopy) may be needed to assist for very large and complex injuries.

Angiography and angioembolization (AE) have helped trauma professionals stop pesky bleeding from the pelvis, solid organs, and other hard to reach places for decades. The American College of Surgeons has recognized its importance and even has a specific criterion for interventional radiologist response times.

Many centers have found this 30-minute response for radiologist arrival to be onerous. So, of course, someone decided to look at the data to see if it was really warranted. The group at the University of Arizona at Tucson did a big data dive using the Trauma Quality Improvement Program database to try to tease out the consequences of prompt vs delayed access to AE in blunt trauma patients.

Four years of TQIP data were analyzed. The authors focused on the records of patients who underwent AE within 4 hours of arrival for blunt injury to liver, spleen, or kidney. They excluded transfers in, burn patients, and those who underwent an operation prior to AE. The 4 hour AE period was subdivided into hourly segments and outcomes were examined for each.

The authors concluded that delayed AE for solid organ injury resulted in increased mortality without any difference in transfused blood products. They encouraged centers to ensure rapid access to this vital procedure.

Bottom line: This is an important paper. Other research on angiography in blunt trauma has not shown the survival differences that we see here. But they did not focus on patients who underwent actual embolization. This one shows that time to AE is very important in those patients who really need it.

It appears that the most important factor is door to angiography suite time. There are many factors involved, though. First, the specific injury must be recognized by the clinicians. This involves access to CT, timeliness of radiologist report, decision making by the trauma professional, and timeliness of response by the interventional radiologist and the IR team.

Most centers focus only on that 30-minute response time required of the interventionalist. But as you can see, there are many more moving parts. I would urge all centers to look at their door to AE time and compare to what was found in this study. If you find that it is taking more than an hour and a half, it’s probably time for a PI project to tighten it up. This is particularly important in centers with low AE volume.

Venous thromboembolism (VTE)  is a common potential complication after traumatic injury. But typically, injury is associated with bleeding, so the trauma professional has to strike a balance between preventing bleeding and preventing clots.

Solid organ injury (liver and spleen, typically) is a common diagnosis after blunt trauma. Most trauma centers have protocols for VTE prophylaxis which apply to patients with those injuries. Older literature that I wrote about eight years divided the time frames for prophylaxis into early (within 3 days), late (greater than 3 days), and none. The authors of that article found that there was no association with untoward bleeding in the early group. And interestingly, there seemed to be less in that group. Unfortunately, the selection of the groups was biased, and the early VTE prophylaxis group had less severe injuries.

The surgery group at the Massachusetts General Hospital tried to clarify current practice by performing a deep dive into the Trauma Quality Improvement Program database. They searched the database to identify patients with “isolated” liver, spleen, kidney, and pancreas injury. They did this by excluding TBI, femur and pelvic fractures, spinal cord injury, and penetrating trauma. They also excluded patients with other other severe injuries with an abbreviated injury scale score of 3 or more.

The authors stratified patients into three groups: early VTE prophylaxis receiving the drug within 48 hours of arrival, intermediate within 48-72 hours, and late after 72 hours.

The authors concluded that early prophylaxis should be considered in patients who do not fall out as higher risk (spleen, high-grade liver, diabetics).

Bottom line: This retrospective study is probably as good as it’s going to get from a data quality standpoint. It’s larger than any single-institution series will ever be, although it suffers from the usual things most large database studies do.

But it does show us strong associations with DVT and PE as the consequences of waiting to start VTE prophylaxis beyond 48 hours. The caveat is to be careful in certain patients, most notably diabetics and those with liver and spleen injuries, as they are at higher risk to develop complications leading to the OR or interventional radiology suite.

I urge all of you to re-examine your VTE prophylaxis guideline and modify it to start your drug of choice as early as possible given the cautions for patients with spleen and high-grade liver injuries. The diabetes thing, well, that’s a mystery to me and I will wait for further confirmation to break those patients out separately.

If you are interested, you can see the Regions Hospital trauma program VTE guideline by clicking here.

This issue is devoted to an uncommon yet potentially devastating problem, blunt carotid and vertebral artery injury.

In this issue, you will learn about:

Or copy this link into your browser: https://traumameded.com/courses/blunt-carotid-and-vertebral-artery-injury/

COVID-19 has changed everything. Our patients and even our co-workers could be harboring the virus. Workplace precautions have changed. Many of the minutiae of living have changed. All trauma professionals are concerned with protecting themselves from contagion in order to continue providing vital care to more patients.

We have a fairly good understanding of how the virus spreads. Aerosols and aerosolizing procedures are a major risk factor for involved personnel. In general, hospitals already have processes and policies in place for the most common aerosolizing procedure, endotracheal intubation. Even in emergency circumstances, this is a relatively controlled procedure.

But what about cricothyrotomy? This is far less commonly performed, and as such is prone to more variability. Surgeons at Northwestern University in Chicago tested several techniques for more safely performing this procedure. They placed three different types of draping materials commonly found in or around a trauma bay over their hands in an attempt to decrease aerosolization produced during the procedure.

They tested these drapes using a cricothyrotomy simulator based on a porcine trachea. To identify aerosolization, they atomized fluoroscein into the trachea and monitored the procedure with an ultraviolet light.

The first drape tested was a clear plastic x-ray cassette holder. The advantage of using this as a drape is its transparency. The surgeon does not need to peek under the plastic while performing the crich. Unfortunately, the stiffness and slipperiness of the plastic makes it prone to sliding off the procedure site.

A dry blue surgical towel was used next. This performed a bit better, but still slipped off the operative field. Black light inspection showed a significant amount of aerosol contamination of the edge of the towel and the surgeon’s gown.

Finally, a wet blue surgical towel was tested. The towel easily stayed in place and retained nearly all of the aerosolized fluoroscein. There was a negligible amount on the surgeon’s gown. 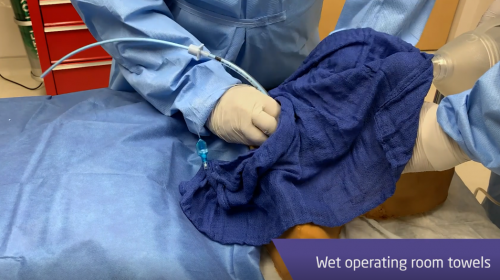 Bottom line: The authors recommended that wet surgical towels be placed over their hands and used as a barrier when performing a cricothyrotomy in a COVID positive or unknown patient. The reality is that this will apply to this procedure in just about any acute trauma patient you see. Obviously, this trick does not eliminate aerosolization. Rather, it dramatically reduces the amount and hence, the risk to the surgeon and other personnel in the room. It’s not perfect, but definitely worth it!

To view a video demonstrating the technique and results for each of the drapes, click here.