Angiography and angioembolization (AE) have helped trauma professionals stop pesky bleeding from the pelvis, solid organs, and other hard to reach places for decades. The American College of Surgeons has recognized its importance and even has a specific criterion for interventional radiologist response times.

Many centers have found this 30-minute response for radiologist arrival to be onerous. So, of course, someone decided to look at the data to see if it was really warranted. The group at the University of Arizona at Tucson did a big data dive using the Trauma Quality Improvement Program database to try to tease out the consequences of prompt vs delayed access to AE in blunt trauma patients.

Four years of TQIP data were analyzed. The authors focused on the records of patients who underwent AE within 4 hours of arrival for blunt injury to liver, spleen, or kidney. They excluded transfers in, burn patients, and those who underwent an operation prior to AE. The 4 hour AE period was subdivided into hourly segments and outcomes were examined for each.

The authors concluded that delayed AE for solid organ injury resulted in increased mortality without any difference in transfused blood products. They encouraged centers to ensure rapid access to this vital procedure.

Bottom line: This is an important paper. Other research on angiography in blunt trauma has not shown the survival differences that we see here. But they did not focus on patients who underwent actual embolization. This one shows that time to AE is very important in those patients who really need it.

It appears that the most important factor is door to angiography suite time. There are many factors involved, though. First, the specific injury must be recognized by the clinicians. This involves access to CT, timeliness of radiologist report, decision making by the trauma professional, and timeliness of response by the interventional radiologist and the IR team.

Most centers focus only on that 30-minute response time required of the interventionalist. But as you can see, there are many more moving parts. I would urge all centers to look at their door to AE time and compare to what was found in this study. If you find that it is taking more than an hour and a half, it’s probably time for a PI project to tighten it up. This is particularly important in centers with low AE volume.

Epidural hematoma is a life-threatening condition that is typically associated with arterial bleeding outside of the dura. Most frequently, this is due to a skull fracture that extends across and lacerates the middle meningeal artery (MMA).

The standard treatment regimen is neurologic monitoring in patients who have a (nearly) normal GCS and do not change neurologically. That escalates to rapid craniectomy and evacuation in those with neurologic compromise.  Interestingly, there have been a few case reports over the last 10 years describing attempted management by embolization of the MMA.

Let’s look at this idea more critically. This seems like it should be a good idea. But remember, in medicine you’ve actually got to study it. There are too many examples of things that make sense that are worthless or actually cause harm.

The first report I found was a series of one in which the patient was found to have a large subdural hematoma. He was taken to surgery and the lesion was evacuated. However, there was persistent epidural bleeding intraop which was thought to be controlled. Repeat scan the next day showed a large epidural, so he was returned to the OR. Once again, there was persistent epidural oozing and the collection was removed. Followup CT showed yet another epidural. The patient was finally taken to interventional radiology for embolization of the MMA. This was successful, and the patient had no further recurrences.

This case provided proof of concept, although the bleeding was not due to known traumatic injury to the MMA. Last year, another case report was published that described an experience (of one again) with a young male who was found down. He awakened and then became obtunded again. CT showed bilateral epidural hematomas. He was taken to the OR for operative evacuation of the larger one. Postop CT showed expansion of the smaller one.

The patient was then taken to the endovascular suite and MMA embolization was carried out. The hematoma stabilized and the patient was later discharged without sequelae.

This case was trauma-related, but not for an acute bleed. Now, let’s look at a bigger case series to see how well this works. This one detailed the experience of a neurosurgery group in Sao Paulo, Brazil. All patients who underwent conservative management based on “standard criteria” were studied. Patients with large hematomas, midline shift, depressed skull fracture, coagulopathy, or incomplete data were excluded. One third of the injuries were due to falls, and the rest were due to other blunt mechanisms.

Bottom line: Sounds impressive, right? But not so fast, there are a lot of loose ends here. First, these are supposedly all patients with epidural hematoma who were treated without operation. Decision to operate was based on criteria set out in a paper published 15 years ago. This strains the imagination a bit. There is usually no uniformity in the way individual neurosurgeons decide to operate, so it is likely there may be some significant selection bias here. It is very easy to believe that patients who were predicted to do well were the only ones enrolled in the study. This also explains why the authors had to use controls from other authors’ research for outcome comparison.

The results are too clean as well. No adverse events. No patients who ended up needing surgery. Followup scans were performed any time between postop day 1 and 7, but there is no frequency breakdown. If most of the repeat scans were performed near the beginning of the postop period, little change would be expected. MMA embolization is either a miracle cure or …

You know what they say, “if it seems to good to be true…” A single case series like this should never change one’s practice. Middle meningeal artery embolization sounds like common sense, but the devil is always in the details. This concept needs a lot more study before you should ever consider it in your patients. Or, you could start a real, IRB-approved study and make an excellent contribution to the neurosurgery literature.

A reader requested that I write about post-embolization syndrome. Not being an oncologist or oncologic surgeon, I honestly had never heard about this before, let alone in trauma care. So I figured I would read up and share. And fortunately it was easy; there’s all of one paper about it in the trauma literature.

Post-embolization syndrome is a constellation of symptoms including pain, fever, nausea, and ileus that occurs after angio-embolization of the liver or spleen. There are reports that it is a common occurrence (60-80%) in patients being treated for cancer, and there are a few papers describing it in patients with splenic aneurysm. But only one for trauma.

Children’s Hospital of Boston / Harvard Medical School retrospectively reviewed 12 years of their pediatric  trauma registry data. For every child with a spleen injury who underwent angio-embolization, they matched four others with the same grade of injury who did not. A total of 448 children with blunt splenic injury were identified, and (thankfully) only 11 underwent angio-embolization. Nine had ongoing bleeding despite resuscitation, and two had developed splenic pseudoaneursyms. 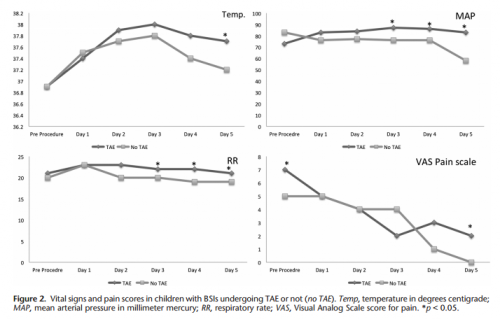 Bottom line: Sorry, but I’m not convinced. Yes, I have observed increased pain and temperature elevations in patients who have been embolized. Some have also had an ileus, but it’s difficult to say if that’s from the procedure or other injuries. And this very small series just doesn’t have enough power to convince me of any clinically significant differences in injured children.

Look at the results above. “Significant” differences were only identified on a few select days, but not on the same days across charts. And although the authors may have demonstrated statistical differences, are they clinically relevant? Is a respiratory rate of 22 different from 18? A temp of 37.8 vs 37.2? I don’t think so. And length of stay does not reveal anything because the time in the ICU or hospital is completely dependent on the whims of the surgeon.

I agree that post-embolization syndrome exists in cancer patients. But the findings in trauma patients are too nondescript. They just don’t stand out well enough on their own for me to consider them a real syndrome. As a trauma professional, be aware that your patient probably will experience more pain over the affected organ for a few days, and they will be slow to resume their diet. But other than supportive care and patience, nothing special need be done.

In my last post, I noted that nonoperative management is the norm for dealing with high grade renal injuries. One of the possible options, angioembolization, was relatively infrequently used at only 6% of the time.

Are there consequences of nonselective renal embolization? Or should we always strive for selective control? The urology group of the University of Tennessee – Knoxville published a series of papers on their experience using embolization in patients with the most severe injuries (Grade 5). They retrospectively examined just over 3 years of admissions with this injury. Numbers were very small (6 men, 3 women).

But they also published a second paper, extending the review dates to capture one more male patient. And they followed this group for 1.5 to 5 years (mean 2.5 years) to determine if any delayed complications surfaced.

It is now well-accepted that high-grade renal injury can and should be managed nonoperatively if the patient’s hemodynamic status is reasonable. I recommend a trip to interventional radiology if the patient has active extravasation or a high-grade (Grade 4 or 5) injury, as these patients are at risk for loss of the entire kidney otherwise. Selective embolization can be attempted first, but don’t be shy to take out the entire organ if need be.

A synopsis of contemporary management of renal injury was presented at the annual meeting of the American Association for the Surgery of Trauma last year. The Genito-Urinary Trauma Study Group (GUTS [groan!]) prospectively collected data on high-grade (grades 3-5) renal injuries from 14 Level I trauma centers over a 14 year period.

Here are some factoids from the article:

Bottom line: Nonoperative management of renal injuries has long been the norm. This more recent review confirms it. Once the abdomen is opened, the chance of losing the entire kidney skyrockets. Expectant management (repeat exam and labs) is very common, and very successful.

Angiography is an important adjunct, but was not used very commonly in this study. Perhaps the surgeons were concerned about complications from embolizing part or all of the kidney? I’ll discuss the consequences of this in my next post.