Here’s one last abstract to consider before the EAST meeting kicks off this afternoon. Every trauma center must have a massive transfusion protocol (MTP). But not every one has access to whole blood. And whole blood is all the rage now for transfusion in the trauma world.

Believe it or not, we must still ask the question “is using whole blood safe?” More than 50 years ago, all we had was whole blood. But we didn’t use it in trauma the way we do today. And we didn’t have the tools then to determine whether there were any adverse effects from its use. Now we do, and we are slowly rediscovering the nuances of using it. Some work has shown that small volumes of whole blood appear to be safe. But there is little information on the safety of using large volumes in MTP.

The group at Oregon Health Sciences University in Portland attempted to do this with a quick shot paper to be presented tomorrow morning. They reviewed their experience over a two year period. For the first 18 months, they used standard component therapy (PRBC + plasma + platelets) in their MTP. For the final six months, they used cold-stored uncrossmatched, low-titer group O blood. Any patient who had MTP activated and received even a single unit of blood was included in the study.

The authors concluded that MTP using whole blood is feasible, and that it appeared to be safe and effective. They also commented that it may lead to more balanced resuscitation.

My comment: Alright, this is the last time I’ll mention study power (for a while). If a study does not have the statistical power to show a difference between groups, then seeing no difference means nothing. The absence of a difference does not mean that the two groups are equivalent. And this study of 125 patients is small potatoes for showing any difference in a crude outcome like mortality.

Besides having a small number of subjects, the average number of units given was low for an MTP. For most trauma centers, this was just over one cooler of products. Although ISS was 29, the patients don’t sound like they had huge blood replacement requirements, so it’s no wonder that mortality was the same between the two groups.

And finally, the statement about more balanced resuscitation is open to debate. The difference between 0.8 units of plasma and 0.94 units is 35cc per unit of red cells given, a little over 1 tablespoon. It’s hard to believe that this would ever make a difference clinically.

To those who read only the title or the conclusion of an abstract (or paper for that matter), beware. The devil is in the details. This study is a good start toward addressing the question posed, but needs several hundred more subjects (and a lot more blood products given) to close in on an answer.

In my last post, I described a long-standing whole blood transfusion program that was implemented by Royal Caribbean Cruise Lines (RCCL)about 10 years ago. Today, I’ll dig into the specifics of their protocol and review their results.

Here is an image of the protocol. You can click it to download a full-size pdf copy. 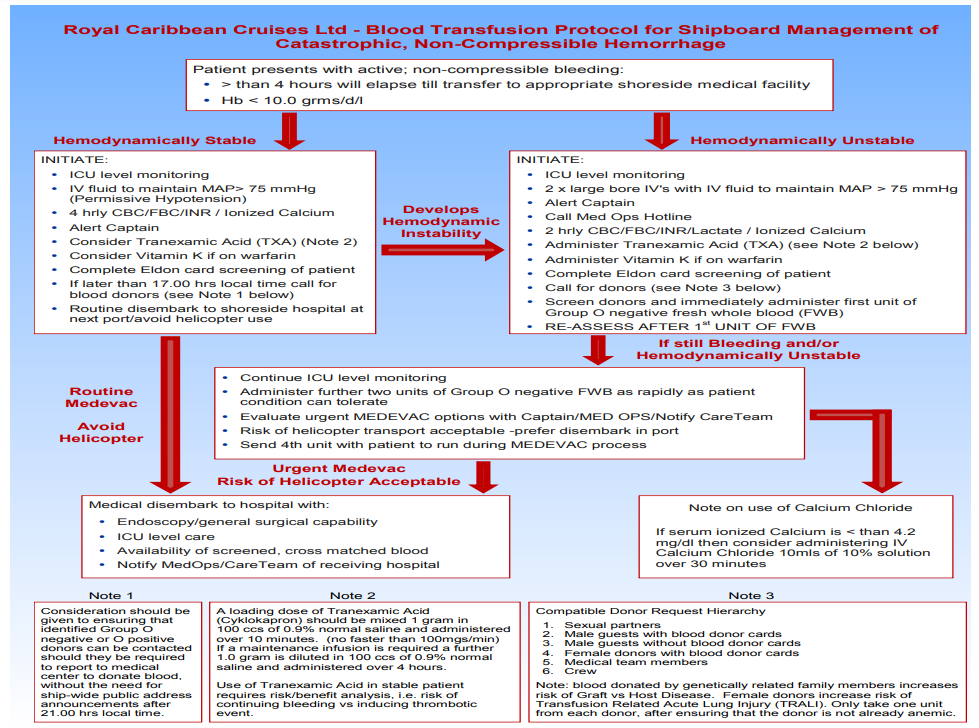 Here are the key points in the protocol:

And here are the guidelines for donor selection:

Here are the factoids describing RCCL’s seven year experience with the program:

Bottom line: This is the first whole blood transfusion program I have seen outside of hospitals and the military. Royal Caribbean has incorporated lessons learned from both in developing their protocol. It includes all the principles of balanced resuscitation, including limiting crystalloids, permissive hyportension, and 1:1:1 transfusion ratios. There are many other opportunities to implement similar protocols in areas where medical capabilities are austere, and this protocol should be used as a model to develop them.

We’ve been using fractionated blood components in medicine, and trauma specifically, for over 50 years. So why doesn’t component therapy work so well for trauma? Refer to the following diagram. Although when mixed together the final unit of reconstituted blood looks like whole blood, it’s not. Everything about it is inferior.

Then why can’t we just switch back to whole blood? That’s what our trauma patients are losing, right? Unfortunately, it’s a little more complicated than that. The military has been able to use fresh warm whole blood donated by soldiers which has been stored for just a few hours. That is just not practical for civilian use. We need bankable blood for use when the need arises.

This ultimately means that we need to preserve the blood, and this requires a combination of preservatives to prevent clotting and keep the cellular components fresh, and refrigeration to avoid bacterial growth. This is not as simple as it sounds. Adding such a preservative to whole blood dilutes it by about 12%. And there are concerns that cooling it may have effects on platelet function. Recent data suggests that platelet function in cooled whole blood is preserved, but platelet longevity is decreased.

There are other issues with the use of whole blood as well. It contains a full complement of white blood cells, and this may be related to reports of venous thrombosis, respiratory distress, and even graft vs host disease. Unfortunately, removing the white cells (leukoreduction) also tends to remove the platelets, and there is little literature detailing the safety of this practice.

Another problem is the plasma component in whole blood. Universal donor (type O) whole blood may contain significant amounts of anti-A and anti-B antibodies. For these reasons, most blood banks limit the number of whole blood units transfused to a handful. A recent paper from OHSU in Portland details a massive transfusion in which 38 units were given to one patient. There was no transfusion reaction, but platelet counts dipped precipitously. All centers currently using whole blood utilize only low-titer anti-A and anti-B units.

So does whole blood work as expected in the civilian arena? The data is still incomplete, but the total transfusion volume appears to be decreased in patients without severe brain injury. With the increased interest and use of whole blood, it is imperative that more safety and efficacy studies are forthcoming.

Here are some tips on getting started with your own whole blood program:

About 40 years ago, blood banks started moving away from keeping whole blood and began separating it into components (packed cells, platelets, plasma, etc.) for more targeted use. For most uses, this is just fine. But what about trauma?

Trauma patients bleed whole blood. Doesn’t it make sense to give whole blood back? Much of our experience with massive transfusion is derived from our colleagues in the military. Two decades ago, the norm was to give 4 units of packed red cells or so, then give two units of plasma, and every once in a while slip in a bag of platelets. Our military experience seems to indicate that this 4:2:1 ratio is not optimal, and that something like 1:1:1 is better.

Is it time to think about supplying whole blood to trauma centers? And actually looking at whether the outcomes are better or not?

About 40 years ago, blood banks started moving away from keeping whole blood and began separating it into components (packed cells, platelets, plasma, etc.) for more targeted use. For most uses, this is just fine. But what about trauma?

Trauma patients bleed whole blood. Doesn’t it make sense to give whole blood back? Much of our experience with massive transfusion is derived from our colleagues in the military. Two decades ago, the norm was to give 4 units of packed red cells or so, then give two units of plasma, and every once in a while slip in a bag of platelets. Our military experience seems to indicate that this 4:2:1 ratio is not optimal, and that something like 1:1:1 is better.

If you think about it, whole blood is already 1:1:1. Splitting it into components and then giving them back seems to be a lot of extra work (and expense) to accomplish the same thing as just giving a unit of whole blood. Plus it triples the exposure to infectious agents and antigens, since the components will usually come from three separate donors. Note that the data in the table above is true for fresh whole blood (not practical in civilian life); banked whole blood will lose some coagulation activity.

Is it time to think about supplying whole blood to trauma centers? And actually looking at whether the outcomes are better or not?