Trauma patients who are hypotensive in the Emergency Department can only be transported to one of two places: the operating room or the morgue. With rare exception, they should never be taken outside the department (e.g. CT scan) because of the fear that they may arrest in an area that is not conducive to efficient resuscitation.

Sometimes patients are initially stable but decompensate later. Since most stable blunt trauma patients end up in CT scan, perhaps there is some telltale sign that can predict later deterioration. A recent Japanese paper looked at the “flatness” of the inferior vena cava as seen on the abdominal CT scan as a predictor of hemodynamic decompensation in the first 24 hours.

A small cohort of 114 patients was used in this prospective study. The vena cava was evaluated at the level of the renal veins. The flatness of the IVC was determined by dividing the transverse diameter by the anteroposterior (AP) diameter. A flat IVC was defined as a transverse to AP diameter ratio of more than 4:1. The ratio in normal patients was about 2:1. See the figure for details. 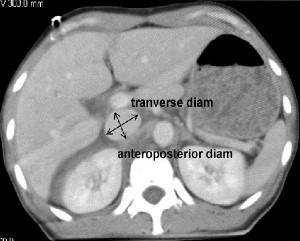 Patients who had a flat IVC required significantly more blood transfusions, crystalloid infusions within 2 hours of admission, and were more likely to proceed to the OR within the first 24 hours of their hospital stay.

Bottom Line: Assuming that you are only taking stable blunt trauma patients to CT, the incidental finding of a flat vena cava should increase your paranoia levels and lower your threshold for ordering blood and getting the trauma surgeons involved.

Sign up to receive the Trauma MedEd Newsletter, and get a free copy of my report on how to stay current. The newsletter is released every 1-2 months, and delivers four pages packed with trauma information you absolutely need to know! Subscribers get it a week before it’s released on the website. Click the image to subscribe!
Next issue (September): Sleep & Fatigue