The data we use as guidance for repeat head CT in elderly patients who sustain mild TBI while taking antithrombotic therapy remains limited. There is a slowly growing consensus that the need is limited, but there is still a very wide variation in practice patterns.

The group at HCA Healthcare Nashville collected data from 24 system hospitals on this very specific cohort of patients: elderly (age > 55), head trauma with GCS 14-15, an initial head CT, and no other injuries with AIS > 2. They divided these patients into two groups based on whether they were currently taking antithrombotic (AT) therapy. Rate of delayed intracranial hemorrhage (ICH), need for neurosurgical intervention, and mortality were compared.

The authors concluded that this specific subset of patients has a very low rate of delayed ICH, and that there are minimal clinical consequences in those that do. They do not support repeat head CT.

Bottom line: This abstract adds to the growing body of literature that shows little benefit to repeat head CT scan after a negative initial study, even if the patient is on blood thinners. Many previous studies involve only a single center and/or have smaller numbers. This one is larger because of the size of the HCA trauma system, and answers a simple set of questions on a limited subgroup of patients: elderly, mild TBI, with limited other injuries.

My back of the envelope power calculations show the authors may be a little short of the number of subjects to be able to show that the difference in the number of delayed ICH (0.7% vs 1.0%) is statistically significant. But the numbers are close enough and the p value so large (0.3) that they are probably right. This is completely offset by the absence of necessary neurosurgical interventions and the single attributable death.

Many trauma centers, including my own, have adopted a “no repeat scan” policy after a negative initial scan, even on thinners. In fact, unless the patient has some other injury that requires admission, they are discharged home with a responsible adult.

This is important and practical work! I’m looking forward to hearing all the details.

Falls are the most common mechanism of injury at a majority of trauma centers these days. And due to the escalating number of comorbidities in our older population, more and more are taking some kind of anticoagulant or antiplatelet medication. And as all trauma professionals know, falling down and failure to clot do not mix well.

A variety of reversal regimens have been developed, including Vitamin K, plasma or platelet infusion, prothrombin complex concentrate, andexxanet, or idarucizumab depending on the agent. But when it comes to evaluating the efficacy of these agents, there are two important questions that need to be answered:

This last question has been problematic, especially for the direct oral anticoagulant drugs (DOACs). They are very expensive, but there has been little, if any, evidence that they improve mortality.

A study from the University of Florida at Jacksonville, and sponsored by EAST was performed last year. It was a multi-center, prospective, observational study of data provided by 15 US trauma centers. They collected data on the agents used, reversal attempts, and comorbidities in injured patients taking these drugs, and analyzed for head injury severity and mortality.

The authors concluded that reversal attempts for antiplatelet therapy or Factor Xa inhibitors did not decrease mortality, and shared the observation that combination therapies posed the most risk for severity of head injury.

My comments: Remember, the first thing to do is look at the study group. The authors did not share the inclusion or exclusion criteria for the study in the abstract, so we are a little in the dark here.

The next item that makes this study difficult to interpret (and perform) is the fact that nearly a quarter are on combination therapy for their anticoagulation. So even though nearly 3,000 patients were studied, many of the medication subgroups had only a few hundred subjects. The aspirin group was the largest, with 1,338. This makes me wonder if the overall study had the statistical power to find subtle differences in their outcome measures and support the conclusions.

Now have a look at one of the results tables:

In reviewing the demographic data, the concept of statistical significance vs clinical significance quickly comes to mind. Somehow, age, ISS, head AIS, mortality, and SBP are significantly different between some of the groups. Yet if you examine the specific values across most of the rows, there is little difference (e.g SBP ranges from 137 to 147, ISS from 7-9, mortality from 2-7%). These are all clinically identical. The only row that means much to me is the top one telling how many patients are in a group.

My bottom line is that I’m not sure that this study has the power to show us any significant differences. And looking at the information table and logistic regression results (odds ratio confidence intervals close to 1), I’m not really able to learn anything new from it. I’m hoping to learn a lot from the live presentation!

More and more people are taking antiplatelet or antithrombotic agents for a variety of medical conditions. One of the dreaded side effects of these medications is undesirable bleeding, particularly after injury. This is especially true if the bleeding occurs inside the skull after any kind of head trauma.

Which agents, if any, lead to worse outcomes? The literature has been a bit inconsistent over the past 10 years. A group from HCA Healthcare reviewed the trauma registries from 90 hospitals, which I presume are in the HCA system. They included patients patients who suffered a ground level fall and were 65 years or older. They excluded those who had a significant injury to regions other than the head. 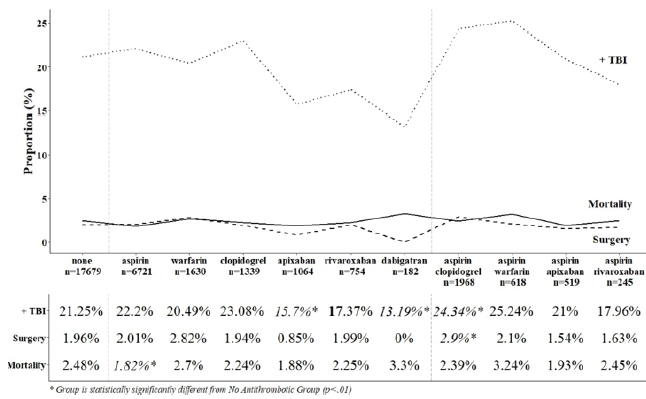 The authors conclude that anti-thrombotic use in the elderly who suffer a ground level fall are not at risk for increased mortality and that they may have negligible impact on management.

My comments: The one thing that makes this abstract difficult to read is their use of the term TBI, which is why I put it in quotes above. I think that the authors are conflating this acronym with intracranial hemorrhage. It’s a bit confusing, because I think of TBI as a term that means the head was struck and either left a physical mark (bump on the outside or blood on the inside) or there was known or suspected loss of consciousness. They are apparently using  it to describe intracranial bleeding seen on CT.

And because this is a registry study, many of the patient-specific outcome details cannot be analyzed. Mortality and operative rates are very crude outcomes. What about some of the softer ones? Although the average GCS was stated to be 14.5, it would be interesting to know how many of these patients were able to return to their previous living situation, and how many were significantly impaired even though they didn’t die or need an operation.

This is important work, and I am anticipating a great discussion after your presentation.