We always worry about the aorta after high-energy blunt trauma in adults. Should we be doing the same in kids? After all, they are very elastic and for the most part they are tough to break.

A 13 year review was undertaken by the CV surgeons at Harborview twenty years ago which tried to answer this question. They looked at medical examiner records of all pediatric deaths (16 or younger) and identified the ones with traumatic aortic injury. They found only 12 deaths (2.1%), and somehow they also tracked one survivor (from ME data???). The age range was 3-15, with a mean of 12 (which means that the majority were in the older age group).

Six children were pedestrian struck, 5 were involved in car crashes, and two were on motorized bikes or ATVs. None of the children in car crashes were restrained and two were ejected. Four of the five were traveling > 55mph. All had other serious injuries, including abdominal and orthopedic.

It’s tough to draw any meaningful conclusions from this paper due to the small numbers, the retrospective design, and the lack of a denominator. The only thing it does tell us is that aortic injury is bad, and that kids should not get hit by cars and should wear their seat belts. The mean age suggests that it involves primarily older children. But we kind of knew all that already.

What it does not help with is figuring out at what age we need to start thinking about imaging the aorta with CT scan. I’ll be digging into that a little more this week.

Angioembolization has become a common procedure that can increase the likelihood of success for nonoperative management for splenic trauma. It does have its own set of complications to be aware of, however.

The most obvious complication is mechanical injury to the femoral artery. This occurs in 1 to 3% of patients. It is more common in the very young (small caliber artery) and the elderly (arteries of stone). Rarely, the substance or device that is used for the embolization may migrate or end up on the wrong spot, infarcting something important.

A common issue that occurs is infarction of portions of the spleen. This is actually the desired effect, as it stops the bleeding. Most of the time, we are unaware of the changes that take place in the spleen post-procedure. But every once in a while we get a repeat CT scan days or weeks down the road and see some very interesting things.

The most common finding is a splenic infarct alone. This is an area of the spleen, sometimes wedge shaped, that does not take up contrast. This is normal. In some cases, gas bubbles are seen within the spleen parenchyma, usually within the infarcted area. In others, large areas of gas are present, and an air-fluid level may also be seen. This is definitely not normal.

Tiny bubbles are normal after this procedure, and can be ignored if the patient does not appear ill and does not have any systemic evidence of inflammation or sepsis. On the other hand, big bubbles or air-fluid levels probably indicate a developing splenic abscess, and the patient will usually appear ill and have a high WBC count. Unfortunately, the only treatment for this is splenectomy. Insertion of drainage catheters does not work and the patient will only become sicker if it is attempted.

The current standard of care is to vaccinate patients after splenectomy to prevent overwhelming post-splenectomy sepsis (OPSS). The real questions are, is this reasonable and is it needed after splenorrhaphy or angioembolization, too?

The spleen was recognized as contributing to infection resistance in the early 1900s. A study on post-splenectomy sepsis that has been widely quoted was published in 1952. Unfortunately, the children involved all had hematologic disorders, so it is difficult to determine if their sepsis deaths were due to splenectomy or their underlying disease.

Reports of sepsis and death continued to accumulate in the latter half of the last century, but there was a tremendous amount of overlap in patient cases. Richardson reviewed the world literature to date and found that, as of about 2003, there were roughly 70 total cases worldwide since the beginning of time, with a death rate of about 30%. Basically, there are more published papers and reports on death from OPSS than there are actual cases!

This flawed data directed a push toward splenorrhaphy and then to nonoperative management of splenic injury. Guidelines have been developed and revised that suggest that the following vaccines should be given to patients with splenectomy:

There is no good data at all on vaccine administration after angioembolization. Animal studies suggest that at least 50% of the spleen must be perfused by the splenic artery in order to maintain immune competence. Patients who have CT or angiographic evidence that a significant portion of the spleen is not perfused should probably undergo vaccination.

Given the rarity of OPSS and the even lower probability of dying from it, a definitive study regarding the usefulness of spleen vaccine administration will never be done. So we are stuck with giving them in spleen-injured or spleen-free patients even though the usefulness can never be proven.

Contrast blush is always a concern when seen on CT of the abdomen for trauma. It can represent one of two things, and both are bad:

These two clinical issues can be distinguished by looking at the location of the contrast and its persistence. A pseudoaneurysm is located within the parenchyma, and the contrast will wash away, so it will not be visible on delayed images. Contrast that extends beyond the parenchyma or persists in delayed views represents active bleeding. In either case, the failure rate of nonoperative management exceeds 80% in adults without additional measures being taken.

Clinically, these patients usually act as if they are losing volume and require additional crystalloid and/or blood transfusion. The natural history in adults is for bleeding to continue or for the pseudoaneurysm to rupture, resulting in a quick trip to the operating room.

If vital signs can be maintained with fluids and blood, a trip to interventional radiology may solve the problem. Selective or nonselective embolization can be carried out and patients with only a few bleeding points can be spared operation. However, if multiple bleeding areas are seen, it is probably better to head to the OR for splenorrhaphy or splenectomy.

The image below shows likely areas of extravasation. They are a bit large to be pseudoaneurysms. 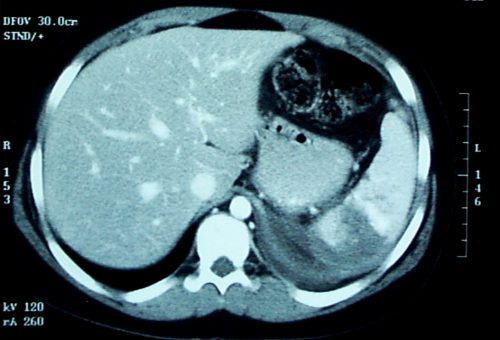 Children are different than adults. Extravasation from spleen injuries in prepubescent children frequently stops on its own. Angiography should only be used if the child is failing nonoperative management.

Spleen injury grading is not as complicated as people think! The grading system ranges from Grade I (very minor) to Grade V (shattered, devascularized).

There is one nuance that people frequently don’t appreciate: multiple injuries can increase the grade. Technically, multiple injuries advance the maximum grade by one point, up to a maximum of Grade 3. So Grade 1 + Grade 1 = Grade 2, but Grades 2+2 = 3! Weird arithmetic!

The first set of numbers indicates the depth of a laceration in centimeters.

The second set of numbers refers to size of a subcapsular hematoma in percent of the total surface area of the spleen. Hint: most of these low grades are determined by laceration depth. Very few actually have sizable subcapsular hematomas. So memorize the 1-3 rule first!

Grades 4 and 5 use other criteria, but in general if it looks completely pulped it’s a 5, and if it’s a little less pulped, it’s a 4.

That’s it! Tomorrow I’ll talk about the real significance of the contrast blush.