Trauma professionals are always on the lookout for injuries that can kill you. Thoracic aortic injury from blunt trauma is one of those injuries. Thankfully, it is uncommon, but it can certainly be deadly.

A wide mediastinum is defined as being > 8cm in width. In this day and age of digital imaging, you will need to use the measurement tool on your workstation to figure this out. 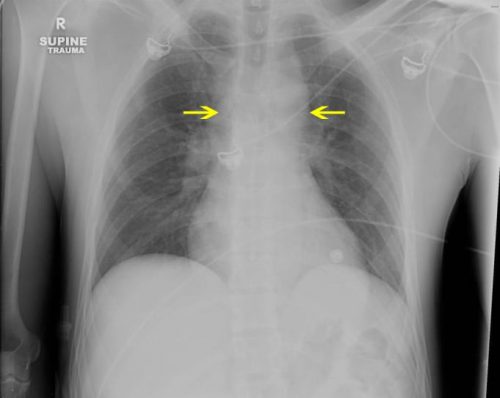 Unfortunately, it seems like most chest xrays show wide mediastinum these days. What are the most common causes for this?

If you encounter a wide mediastinum on chest xray in a patient with a significant mechanism for aortic injury, then they should be screened using helical CT.

Over the past two decades, there has been a massive swing from open repair of blunt thoracic aortic injury to thoracic endovascular aortic repair (TEVAR). Although technically a bit more complex, it has decreased both morbidity and mortality significantly. The usual push in fresh trauma patients is to take care of all the life-threatening injuries as soon as possible. And from the days of the open thoracic procedure, this was generally warranted.

However, the optimal timing of repair during the age of TEVAR is not as clear. Is it really necessary to go crashing into the angio or hybrid suite to get this taken care of? Or should it wait until the patient is not as physiologically damaged? The group at University of Texas at San Antonio looked at experience in the National Trauma Databank for some guidance. They reviewed four years of data from 2012 to 2015. Patients who arrested in or prior to arrival in the ED were excluded. Mortality was the primary outcome of interest, but complications and hospital length of stay (LOS) was also noted.

The authors concluded that delayed (>24 hrs) TEVAR was associated with decreased mortality but longer length of stay.

This is a nice, clean abstract to read. The hypothesis and results are easy to understand and make sense. And it’s exactly the kind of poster that makes you think a bit.

The only real downside is that it is an NTDB study, so there is very limited ability to go back and tease out why these results should be true. These results should push the authors to set up a more prospective study so they can figure out why this should be true. We can certainly speculate that it helps to temporize with good blood pressure control while cleaning up other major injuries and correcting deranged physiology. But one never knows until the right study is actually done.

I’m very excited by this one, and I don’t normally get too excited by posters. Great work! 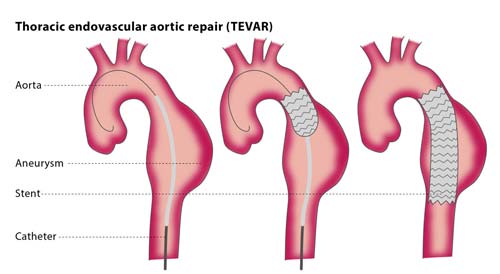 The Eastern Association for the Surgery of Trauma (EAST) has been helping trauma professionals through the publication of practice guidelines for more than 15 years. Members of EAST donate their time to review reams of literature, good and bad, to try to determine the answers to common or puzzling clinical questions.

Why follow a practice guideline? Quite simply, if properly developed, a guideline represents our best understanding of the “correct” answer to the question posed. And as many of you who follow this blog already know, things that “seem to make sense” frequently are totally wrong. Your own experience is poignant, but the pooled experience of the many others who contributed to research on the topic in question is much more significant.

So on the the practice guideline for blunt traumatic aortic injury (BTAI). This one answers three questions. I will list each, followed by the conclusions reached through the literature review.

1. In patients with suspected BTAI, which diagnostic modality should be chosen: CT angiography of the chest, or conventional catheter angiography?

– Catheter angiography was the standard for decades. When the first EAST guideline on this topic was released 15 years ago, CT angiography was only a level III recommendation because experience with it was lacking. CT technology has advanced rapidly, with multiple detectors, helical scanning, and incredible computing power. Although the quality of the evidence is somewhat low, the panel strongly recommends the use of CT angiography due to its ready availability, speed, low invasiveness, and ability to detect and define other injuries.

2. Should endovascular or open repair be selected in order to minimize stroke, renal failure, paraplegia, and death?

– Once again, the quality of available data is so so. However, it was possible to detect differences in outcome in comparative studies. The panel strongly recommends the use of endovascular repair in patients who do not have contraindications due to its lower blood loss, mortality, and paraplegia, and equivalent risk of stroke. Furthermore, it is performed more frequently now than open repair, and experience is thus greater at many institutions, further reducing complications.

3. Should the repair be performed immediately or delayed in order to minimize stroke, renal failure, paraplegia, and death?

– Literature review revealed that the incidence of renal failure and paraplegia were lower with delayed repair, while renal failure was the same in patients with significant associated injuries. There was benefit to delaying repair until resuscitation was achieved and any other life threatening injuries were addressed. The panel recommends that delayed repair be carried out once these other conditions have been corrected. The procedure should not be delayed until the next morning for the convenience of the surgeons.

Reference: Evaluation and management of blunt traumatic aortic injury: a practice guideline from the Eastern Association for the Surgery of Trauma. 78(1):136-146, 2015.

Blunt injury to the thoracic aorta is one of those potentially devastating ones that you (and your patient) can’t afford to miss. Quite a bit has been written about the findings and mechanisms. But how do you put it all together and decide when to order a screening CT?

There are a number of high risk findings associated with blunt aortic injury. Recognize that they are associated with the injury, but are still not very common. They are:

Note on torso crush: I have seen three aortic injuries from torso crush in my career, one from a load of plywood falling onto the patient’s chest, one from dirt crushing someone when the trench they were digging collapsed, and one whose chest was run over by a car.