How To Remove A Chest Tube

The cost of care in a trauma center is high. When anything is expensive, it is natural to wonder about its cost-effectiveness. A group of biostatisticians recently looked at the treatment costs and cost-effectiveness of treating trauma patients in a trauma center vs an nontrauma hospital. They were very comprehensive in looking at costs, including costs for transportation, treatment at a transferring hospital, rehospitalization for acute care if needed, inpatient rehab, stays in longterm care or skilled nursing care facilities, outpatient care and informal care given by family members.

The bottom line: Trauma is a leading cause of death in this country. The concept of treating more severely injured patients at trauma centers is both effective and cost-effective. Trauma systems need to be fine-tuned so that they get the right patient to the right hospital and so care for elderly patients continue to improve.

EMS providers are the trauma professional’s eyes and ears when providing transportation from the scene of an accident. We rely on their assessment of the mechanism of injury and the amount of blood lost. We tend to believe in the accuracy of those assessments.

A study was carried out that tested EMS personnel on their ability to accurately estimate specific amounts of blood that were left at a simulated accident scene. The blood volumes tested were 500cc, 1000cc, 1500cc and 2100cc. A total of 92 professionals participated, and there was an even split into basic EMTs (34%), intermediate/critical care EMTs (33%) and paramedics (31%). Experience levels were as follows: 0-5 years 43%, 6-10 years 30%, >10 years 31%.

The results were as follows:

Only 8% of the subjects were within 20% of the actual volume, and an additional 19% were within 50%. In general, most medics underestimated the amount of blood lost, and their guesses were worse with higher volumes. The median guess for the 2100cc loss group was only 700cc! 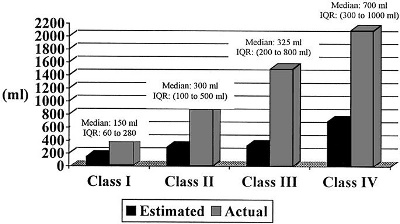 The bottom line: Visual estimates of blood loss are extremely inaccurate, and are most likely  underestimates. Physicians in the ED should rely on exam and physiology to help determine the amount of blood loss. For safe measure, multiply the reported blood loss of the EMT or paramedic by 2 or 3 to get a realistic number.

There has always been a perception that trauma patients sue more often than other patients, and that trauma surgeons get sued more often than surgeons who do not provide trauma care. In several surveys polling surgical residents, this perceived malpractice risk is an impediment to considering a trauma practice. It is also frequently cited as a reason why established general surgeons do not want to engage in trauma care.

It is difficult to objectively study this area. Data sources are few and far between, and it is often difficult to get denominator information to determine the true incidence of lawsuits against trauma surgeons.

The bottom line: Health care is a complicated process, and there are bound to be a few adverse outcomes. The majority of these occur due to reasons that we do not yet fully understand. Lawsuits are rare, and as long as the physicians adhere to the standard of care, they frequently prevail. The idea that trauma surgeons get sued more frequently or more successfully than our non-trauma surgical colleagues is a fallacy that needs to finally be laid to rest.

Do Trauma Surgeons Really Get Sued More Often? Part One

Tomorrow I will look more specifically at the malpractice risk of trauma surgeons alone.