Here’s a short, 5 minute video on how to grade spleen injuries like a pro! Enjoy!

Most trauma centers have some kind of practice guideline for managing solid organ injury. Unfortunately, the specifics at each center are all over the map. Here are a few common questions:

As for activity, some earlier studies have shown that early ambulation is safe. The group at Hahnemann University Hospital in Philadelphia tried to determine if early mobilization would decrease time in ICU and/or the hospital, or increase complications.

Until 2011, their trauma service kept all patients with solid organ injury at bed rest for 3 days(!). They modified this routine to allow ambulation the following morning for Grade 1 and 2 injuries, and after 24 hours for Grade 3 and above, or those with hemoperitoneum. They examined their experience for 4 years prior (PRE) and 4 years after (POST) this change. They excluded patients with penetrating injury, or other significant injuries that would impact the length of stay.

Bottom line: It’s about time we recognized what a waste of time these restrictions are! Unfortunately, the study groups became very small after exclusions, but apparently the statistics were still valid. But still, it continues to become clear that there is no magic in keeping someone starving in their bed for any period of time.

At my hospital, we adopted a practice guideline very similar to this one way back in 2004 (download it below). Hospital lengths of stay dropped to about 1.5 days for low grade injury, and to about 2.5 days for high grade.

And earlier this year, we eliminated the NPO and bed rest restrictions altogether! How many patients actually fail and end up going urgently to the OR? So why starve them all? And normal activity started immediately is no different than activity started a few hours or days later.

Don’t starve or hobble your patients, adults or children!

The shift toward initial nonoperative management of spleen injuries began in the early 1990’s, as the resolution of early CT scans began to improve. Our understanding of the indicators of failure also improved over time, and success rates rose and splenectomy rates fell.

Angiography was adopted as an adjunct to early management, especially when we figured out what contrast extravasation and pseudoaneurysms really meant (bad news, and nearly certain failure in adults). At first, it was used in a shotgun approach in most of the higher grade injuries. But we have refined it over the years, and now it is used far more selectively at most centers.

A group at Indiana University was interested in looking at the impact of angio use on splenic salvage over a long time frame. They queried the National Trauma Data Bank, looking specifically at high grade splenic injury care at Level I and II centers from 2008-2014. Patients undergoing splenectomy were divided into early (<= 6hr after admission) and late (> 6 hrs). Over 50,000 records were analyzed.

Problem: The early splenectomy rate increased from about 13% to 14%, reading their graph, and is probably not significant. These are the failures that occur in the trauma bay and shortly thereafter that must be taken to the OR. The late splenectomy rate decreased from 5% to 3%, which may be significant (p value not included in the abstract). These are failures during nonoperative management, and are decreasing over time. And BTW, the authors do not define what “high grade” splenic injuries they are looking at. 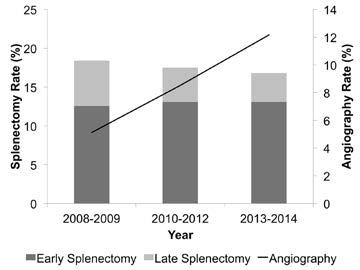 Bottom line: This abstract illustrates why it is important to read the entire article, or in this case, listen to the full presentation at AAST. It sounds like one that’s been written to justify not having angiography available as it is currently required.

The authors showed that overall splenectomy rate was the same, but delayed splenectomy (late failure) has decreased with increasing use of angiography. But remember, this is an association, not cause and effect. Most of the early failures are still probably ones that can’t be prevented, but we’ll see if the authors can dissect out how many went to OR very early (not eligible for angio), or later in the 6 hour period (could have used angio). It looks to me like the use of angiography is having the desired effect. But undoubtedly we could use that resource more wisely. What we really need are some guidelines as to exactly when a call to the interventional radiologists is warranted.

In most trauma textbooks, the most commonly injured solid organ is the spleen. There is a lot of work available that tells trauma professionals how to detect and manage spleen injuries. However, the treatment of the sequelae is less clear cut. We know that the platelet count generally rises after spleen injury, and especially if it is removed. We think we know that we should be on alert if the platelet count goes over 1 M per microliter (ul) to avoid thrombisis.

What happens during the usual hospital course? Is venous thrombosis actually a problem? A group at St. Michael’s Hospital in Toronto performed a 5 year retrospective review of their patients with splenic injury to try to answer these questions. Children and patients with known pre-existing coagulopathy or that were taking anticoagulants were excluded. All were managed with prophylactic low molecular heparin, although the specific product or protocol were not described.

Bottom line: This small study provides some interesting and important information regarding the platelet count trend after splenic injury. Although there was not enough power to look at the association with DVT, PE, and the value of aspirin treatment for extreme thrombocytosis, the platelet count trend info was very interesting. It looks like we should be checking a platelet count about 2-3 weeks after injury to make sure it’s not reaching extreme levels. This can be scheduled during their postop or post-discharge visit. A reminder should also be sent to the primary care physician to be on the lookout for extreme thrombocytosis for the first three weeks post-injury.

Over the past several days, I’ve been writing about updates to our solid organ injury protocol. It eliminates orders for bed rest and NPO diet status afterwards. After looking at our experience over the years, the number of early failures is practically zero. So how many days do you need to keep a patient in bed to make sure they have an empty stomach when they need to be whisked away to the OR. And does walking around really make your injured spleen fall apart?

The answers are none and no. So we’ve updated our protocol at Regions Hospital to reflect this. Feel free to download and modify to your heart’s content. If you want a copy of the Microsoft Publisher file, just email me!