But the group at UCSF is questioning this. They retrospectively looked at 5 years of data on patients who underwent trauma laparotomy without preoperative imaging. They focused on new findings on CT that were not reported during the initial operation.

Bottom line: This is a very interesting and potentially practice changing study. However, there is some opportunity for bias since only select patients underwent postop scanning. Nevertheless, one in five patients who did get a postop scan had an injury that required some sort of intervention. This study begs to be reworked to further support it, and to develop specific criteria for postop scanning.

Penetrating injury to the diaphragm, and specifically stab wounds, have been notoriously hard to diagnose since just about forever. Way back in the day (before CT), we tried all kinds of interesting things to help figure out if the patient had a real injury. Of course, we could just go to the OR and lap the patient (laparoscopy did not exist then). But the negative lap rate was significant, so we tried a host of less invasive techniques.

Remember diagnostic peritoneal lavage? Yeah, we tried that. The problem was that the threshold for red cells per cubic mm was not well defined. Some would supplement this technique with a chest tube to see if lavage fluid would drain out. And one paper described instilling nuclear medicine tracer into the abdomen and sitting the patient under a gamma camera for a few hours to see if any ended up in the chest. Groan!

We thought that CT would save us. Unfortunately, resolution was terrible in the early years. If you could actually see the injury on CT, it was probably because a large piece of stomach or colon had already fallen through it. But as detectors multiplied and resolution improved, we could begin to see some smaller defects. But we still missed a few. And the problem is that left-sided diaphragmatic holes slowly enlarge over time (years), until the stomach or colon falls through it. (See below)

A group of radiologists and surgeons in a Turkish trauma hospital recently published a modest series of patients with left-sided diaphragm injuries evaluated by CT. They looked at about 5 years of their experience in a group of patient who were at risk for the injury due to a thoraco-abdominal stab wound. Unstable patients were immediately taken to OR. All of the remaining patients underwent an initial CT scan, followed by diagnostic laparoscopy after 48 hours if they remained symptom free.

Bottom line: The authors somehow looked at the numbers and concluded that CT is valuable for detecting left diaphragm injury. Huh? They missed 7% of injuries, only finding them later at laparoscopy. And they had a 31% negative laparotomy rate.

Now, it could be that the authors were using crappy equipment. Nowhere in their paper do they state how many detectors, or what technique was used. Since it took place over a 5 year period, it is quite possible that the earlier years of the study used equipment now considered to be out of date, or that there was no standardized technique.

CT may not yet be ready for prime time. But it can be a valuable tool. Tune in tomorrow for some tips on how and when to look for this insidious injury.

Most patients with major traumatic injuries are handled in a very systematic way by both EMS and trauma centers. We have routines and protocols designed to provide rapid, quality care to these individuals. But over the years, I’ve begun to appreciate the fact that there is a very small subset of these patients who are different. 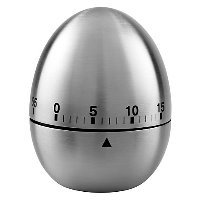 I term these patients as having an “egg timer injury”. These are patients who have only a certain number of minutes to live. This fact requires us to change the usual way we do things in order to save their lives or limbs. The usual routine may be too slow.

And unfortunately, no one can tell us exactly how many minutes are left on the timer. We only know that it’s ticking. Here are some examples of such  injuries:

In each case, speed is of the essence. What can we do to decrease the time to definitive intervention? For prehospital providers, you may need to bypass a closer hospital that might not have the necessary resources at a particular time of day. Once at the hospital, the patient may need to bypass the emergency department and proceed straight to the OR. Or you may need to do a lateral canthotomy yourself, rather than waiting for an ophthalmologist to drive in only to have the patient lose their vision because of the  delay.

Bottom line: Remember that protocols are not necessarily etched in stone. They will cover 99.9% of cases you see. But that remaining 0.1%, the patients with the “egg timer injury”, will require you to think through what you know about the patient at the time, and make decisions about their care that may have a huge outcome on their life or livelihood. And as always, if you find that you must do things differently in the best interest of your patient, be sure to document what you knew and your thought processes thoroughly so you explain and/or justify your decision-making when you are invariably asked.

There is considerable variability in the way that penetrating wounds are approached. Some are located over areas of lesser importance (distal extremities) or are so superficial that they obviously don’t fully penetrate the skin.

Unfortunately, some involve high-value structures (much of the neck and torso), or are too small to tell if they penetrate (ice pick injury). How should these injuries be approached?

Too often, someone just probes the wound and makes a pronouncement based on that assessment. Unfortunately, there are major problems with this technique:

A better way to approach these wounds is as follows:

As one of my mentors, John Weigelt, used to say, “Doctor, do you have an eye on the end of your finger?” In general, don’t use anything that doesn’t involve an eyeball in your local wound explorations!

Although penetrating injuries are a relatively uncommon mechanism at most trauma centers, they are more likely than not to injure deeper structures. Key decisions need to be made quickly during the initial evaluation in order to provide the best care.

Here are some practical tips: