The newest edition of the TraumaMedEd newsletter is out! The topic is DVT, with some interesting and unexpected info on this common problem. 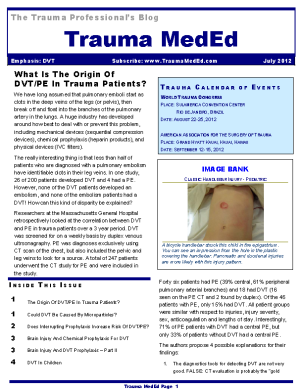 Comments and requests are welcome!

Repeating the head CT in patients with head injury has almost become routine. This practice varies greatly and depends on the neurosurgeon’s preference in many centers. It occurs most commonly when there is blood inside the skull, any type of blood. But does this practice make sense? Sure, if you’ve got a small epidural it seems reasonable. But what about that wisp of subarachnoid blood?

Another paper being presented at the Congress of Neurologic Surgeons this fall describes a review of 445 cases at their hospital and a meta-analysis of 15 studies in the literature. The authors looked at the practice of repeat CT scanning with respect to the good old clinical exam. They stratified all patients who underwent an intervention after repeat CT into two groups, based on changing clinical exam or CT findings.

They found that a significant number of patients required some management change based on deteriorating neurologic exam, whereas very few required it based on the repeat CT. The authors concluded that it is not necessary to rescan a head trauma patient if their neurologic status is stable or improving.

Bottom line: This is preliminary data, and it is only available in abstract form, so don’t change your practice yet. We need more information on how many patients were reviewed and how good the meta-analysis was. However, you should begin to question whether rescanning everyone is necessary or prudent. Not all head injuries are alike, and some of the trivial ones, like subarachnoid blood in a young adult probably don’t need a repeat scan. More to come when this is presented and/or published.

There’s a lot of confusion about subdural pathology after head trauma. All subdural collections are located under the dura, on the surface of the brain. In some way they involve or can involve the bridging veins, which are somewhat fragile and get more so with age.

Head trauma causes a subdural hematoma by tearing some of these bridging veins. Notice how thick the dura is and how delicate the bridging veins are in the image below.

When these veins tear, bleeding ensues which layers out over the surface of the brain in that area. If the bleeding does not stop, pressure builds and begins compressing and shifting the brain. A subdural hematoma is considered acute from time of injury until about 3 days later. During this time, it appears more dense than brain tissue.

After about 3-7 days, the clot begins to liquefy and becomes less dense on CT. Many hematomas are reabsorbed, but occasionally there is repeated bleeding from the bridging veins, or the hematoma draws fluid into itself due to the concentration gradient. It can enlarge and begin to cause new symptoms. During this period it is considered subacute.

It moves on to a more chronic stage over the ensuing weeks. The blood cells in it break down completely, and the fluid that is left is generally less dense than the brain underneath it. The image below shows a chronic subdural (arrows). 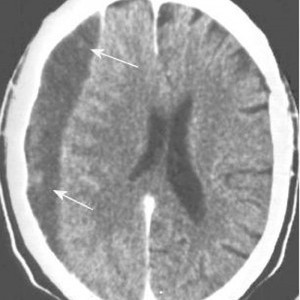 Hygromas are different, in that they are a collection of CSF and not blood. They are caused by a tear in the meninges and allow CSF to accumulate in the subdural space. This can be caused by head trauma as well, and is generally very slow to form. They can lead to slow neurologic deterioration, and are often found on head CT in patients with a history of falls, sometimes in the distant past. CT appearance is similar to a chronic subdural, but the density is the same as CSF, so it should have the same appearance as the fluid in the ventricle on CT.

The authors looked at their own experience with 200 adolescent and young athletes. They stratified by age (younger = 13-16 year olds, older = 18-22 year olds), with 100 in each group. They matched them by number of previous concussions, and all underwent baseline and post-concussion ImPACT testing. They specifically looked at the number of days needed to return to baseline.

Interestingly, they identified significant differences in recovery time. And strangely enough, the older players did better than the younger ones. Overall, 90% returned to baseline within a month. But the younger players took 2-3 days longer to recover than the older ones.

Bottom line: Looks like the Concussion in Sport Group is right on! Usually in trauma, older folks do worse than younger ones, so we tend to treat them more carefully. Not so in youngsters with concussions. Sports medicine physicians need to realize that the younger brain takes longer to recover, and they should err on the safe side and keep them out of the game longer. Objective testing to help predict return to play is extremely helpful.

People who work in hospitals, particularly physicians, physician assistants, nurse practitioners and residents are throwbacks who still use old-fashioned paging technology. My colleague, the Skeptical Scalpel, recently lamented this fact in one of his blog posts. But they do seem to be a necessary evil, since cellular coverage is often limited deep inside of buildings.

But how much to trauma professionals get paged? An oral presentation at the recent Congress of Neurological Surgeons described a study that monitored paging practices between nurses and neurosurgical residents.

Medical students were paid to follow neurosurgical residents during 8 12-hour call shifts. They recorded the paging number and location, priority, and what the resident was doing when paged. The results were enlightening but not surprising:

Bottom line: Yes, we are throwbacks using an old technology. But it does serve us well. Unfortunately, it’s an old technology being used in an inefficient manner. I recommend that nursing units make it a practice to maintain a “page list” of nonurgent items. The trauma professional can then stop by or call each unit periodically (every 2 hours or some other appropriate time interval) and deal with all of them at once. Obviously, urgent and emergent problems should still be called immediately. This will ensure that routine issues are taken care of in a timely manner and the trauma pro can attend to their other duties as efficiently as possible.