The answers to this pop quiz will appear tomorrow, thanks to my earlier tirade against distracted flying.

This post is for my readers located near large bodies of water!

Personal watercraft use exploded a decade ago, and they are still heavily used for recreation and vacation fun. However, speed and people don’t always mix well. Here’s an interesting case to ponder.

An 18 year old woman was the rear passenger on a jet ski traveling at a high rate of speed (of course). She fell off and was plucked out of the water by the driver. After riding for another 30 minutes, they headed to shore. A short while later, she began experiencing vague lower abdominal discomfort. This slowly progressed throughout the afternoon, becoming more severe.

She presents to your ED, looking uncomfortable and slightly ill. Here are some questions to ponder:

Time for some more philosophy! After doing anything for an extended period, one begins to see the common threads and underlying principles of their area of expertise. I’ve been trying to crystallize these for years, and today I’m going to share one of the most basic laws of trauma care.

The First Law of Trauma: Any anomaly in your trauma patient is due to trauma, no matter how unlikely it may seem.

Bottom line: The possibility of trauma always comes first! It is your job to rule it out. Only consider non-traumatic problems as a last resort. Don’t let your non-trauma colleagues try to steer you down the wrong path, only to have your patient suffer.

The March newsletter is now available! Click the image below or the link at the bottom to download. This month’s topic is Protocols. You’ll need a QR code reader if you want to download to your mobile device. Or just use the web URLs provided to download to your desktop/notebook. 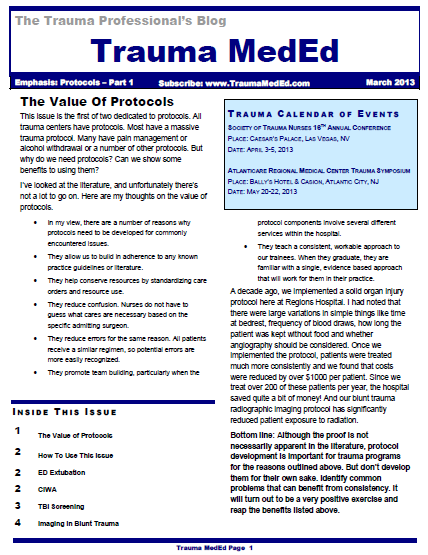