This case involved a young male who had undergone a splenectomy for blunt trauma. He had an unremarkable postop course and was discharged after 5 days. He presented 2 weeks later with abdominal pain out of proportion to his exam.

The first CT scan hint showed pneumatosis of the cecum, which is decidedly unusual in a young person: The next CT scan hint showed thrombosis in the superior mesenteric vein: 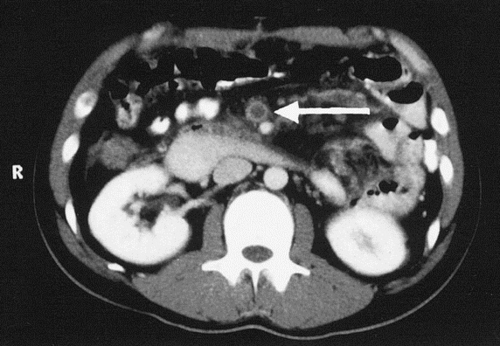 This case illustrates an uncommon yet dangerous complication of splenectomy: portal and mesenteric veinous thrombosis. It is generally believed to be caused by thrombocytosis resulting from the splenectomy. The pneumatosis is most likely due to problems resulting from venous congestion.

In this particular case, the patient’s abdominal exam was not consistent with a catastrophic problem (yet). He was taken quickly to the interventional radiography department, where a catheter was inserted and lytic therapy was begun. HIs pain resolved, and repeat CT showed recanalization of much of his portal and mesenteric venous system, as well as resolution of the pneumatosis. He was discharged on warfarin therapy.

Bottom line: Uncommon and dangerous: a bad combination. This often results in delayed diagnosis and severe abdominal complications, including loss of much of the intestine. Monitor the platelet count closely postop until it plateaus, and if it still rising on discharge from the hospital, arrange for monitoring as an outpatient. Dogma tells us to treat with aspirin or similar drugs as the count approaches 1 million/cubic mm, but good studies are lacking. Development of this particular complication requires anticoagulation, and possibly lytics or surgical resection depending on patient condition.

Hat tip to StillChucklesandNP for getting the answer with limited information, and whom I had the pleasure of meeting on a recent visit to her hospital!