A “Crash” Course In The Use Of TXA

This short (5 minute) video details the use of transexamic acid (TXA) in trauma patients, with a focus on use in community hospitals.

Originally shown at the TE:TNG 2014 conference earlier this month.

You are in the middle of a fast-paced trauma activation. The patient is awake, and mostly cooperative. The x-ray plate is under the patient and everyone stands back as the tech gets ready to fire the x-ray machine. At that very moment, your patient reaches up and places his hand on his chest. Or one of the nurses reaches over to check an IV site.

The x-ray tech swears, and offers to re-shoot the image. What do you do? Is it really ruined? They have an extra plate in hand and are ready to slide it under the patient bed.

The decision tree on this one is very simple. There are two factors in play: what do you need to see, and how hard is it to see? The natural reaction is to discard the original image and immediately get a new one. It’s so easy! But take a look at this example of a “ruined” chest xray. 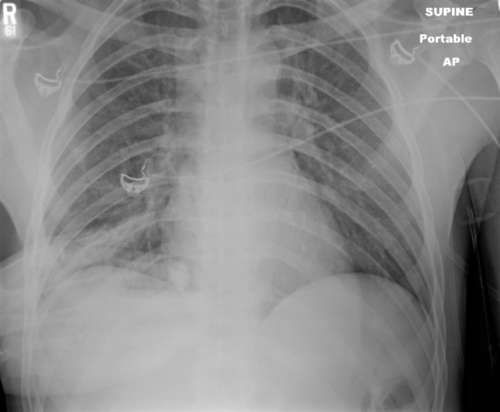 Bottom line: You are looking for 2 main things on the chest x-ray: big air and big blood. Only those will change your management in the trauma bay. And they are very easy to see, even if the image is cut off and off center. Couple that with the fact that an arm overlying the image does not add a lot of “noise” to the image. So look at the processed image first. 99% of the time, you can see what you need, and will almost never have to repeat. [Hint: the same holds true for the pelvic x-ray, too. You are mainly looking for significant bony displacements, which are also easy to see.]

They are the cliches of the courtroom. The defendant appears before the jury with a cane, a cast, and a soft cervical collar. Looks good, but are they of any use? There are really two questions to answer: does a soft collar limit mobility and does it reduce pain? Amazingly, there’s very little literature on this ubiquitous neck appliance.

First, the mobility question. It’s a soft collar. It’s made of sponge. So it should be no surprise that it doesn’t reduce motion by much, about 17%. But it is better than no collar at all.

What about pain control? One small retrospective review looked at the effect of a soft collar vs no collar at all on pain after whiplash injury. Keep in mind that the definition of “whiplash” is all over the place, so you have to take it with a big grain of salt. But the authors found that there was no difference in subjective pain scoring with or without the collar.

Another much older study (1986) compared a soft collar with active motion after whiplash. Subjects who actively moved their neck around had less subjective pain after 8 weeks. 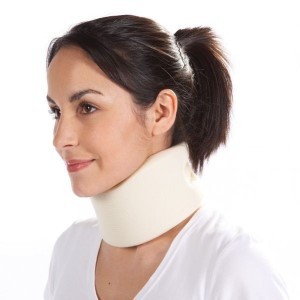 Bottom line: The soft cervical collar keeps your neck warm. Not much else. And in my experience, prolonged use (more than a few days) tends to increase uncomfortable neck spasms. So use them as an article of clothing in Minnesota winters, but not as a medical appliance.

Hemostatic resuscitation (HR) is the new buzzword (buzz phrase?) these days. The new ATLS course touts it as a big change, and quite a few publications are being written about it. But, like many new things (think Factor VII), will it stand the test of time?

It has long been recognized that hemorrhage from trauma is bad. Mortality rates are high, and traditional management with crystalloids and then blood products leads to persistent coagulopathy, troublesome bleeding, tissue injury, and finally death. HR was devised to address the early coagulopathy. It concentrates on early coag correction with plasma and platelets, permissive hypotension, and rapid definitive correction of hemorrhage.

The end result of HR has been measured, and both organ perfusion and coagulopathy can be corrected with it. Unfortunately, these measurements are typically taken once hemorrhage control has been achieved. Is looking at (or beyond) the endpoint really the best way to gauge its effectiveness?

A robust multicenter study scrutinized looked at coagulopathy correction and organ perfusion during active hemostatic resuscitation. They used ROTEM to gauge the former, and lactate levels for the latter. Values were measured on arrival and after administration of every 4 units of blood. Only patients who received at least 4 units were included (106 subjects).

Bottom line: This was a well-done study on a relatively large number of patients, although a number of weaknesses and potential improvements are pointed out in the discussion. There’s a lot of data in the paper, and I urge you to read it in depth. But it seems to show that hemostatic resuscitation is not necessarily doing what we want it to do during the acute phase of hemorrhage. Both bleeding AND transfusions must be stopped before it appears to work. And even then, there is a delay before ROTEM and lactate parameters return to normal. For now, rapid control of hemorrhage is of utmost importance. We still need to figure out how tools like ROTEM or TEG and various serum markers will help us while we accomplish it.

Reference: Hemostatic resuscitation is neither hemostatic nor resuscitative in trauma hemorrhage. J Trauma 76(3):561-568, 2014.

But in many ways, they recover more quickly and more completely after injury. What about after what is probably the biggest insult of all, cardiac arrest after blunt trauma? The NAEMSP and the ACS Committee on Trauma recently released a statement regarding blunt traumatic arrest (BTA):

Bottom line: Children are just like little adults when it comes to blunt cardiac arrest after trauma. Although it is a retrospective, registry-based study, this is about as big as we are likely to see. And don’t get suckered into saying "but 1.5% with no vital signs ever were discharged!” This study was not able to look at the quality of life of survivors, but there is usually significant and severe disability present in the few adult survivors after this event.