Venous thromboembolism (VTE) is always a concern in trauma patients. But patients with spine fractures are at much higher risk and those with spinal cord injuries on top of it even more so. The best tool we have right now for prevention is chemoprophylaxis with some type of heparin. Unfortunately, VTE prophylaxis is commonly interrupted or delayed due to concern for causing bleeding. These concerns may relate to concomitant injuries (e.g. solid organ injury) or necessary surgical procedures.

About five years ago, the Army provided a $4.25M grant to fund the Coalition of Leaders in Thromboembolism (CLOTT) study group. It involved contributions from 17 Level I trauma centers attempting to look at the incidence, treatment, and prevention of VTE after trauma. Additional phases are now under way to look at offshoot discoveries from the original research.

A group from the University of California – Sand Diego performed a secondary analysis of a subset of the CLOTT study in patients age 18-40 over a three year period. Patients with a diagnosis of spinal cord injury who were admitted for at least 48 hours were analyzed. The authors focused on timing of the start of VTE prophylaxis, VTE rates, and missed prophylactic dosing. They also reviewed any bleeding complications. 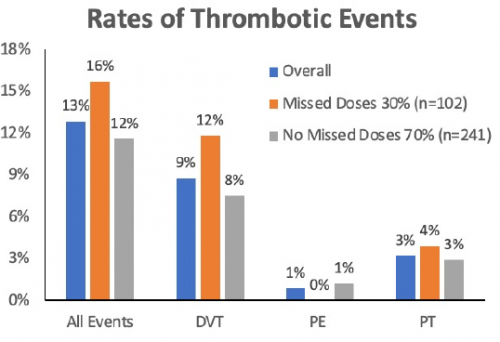 The authors concluded that VTE rates are high in these patients and early chemoprophylaxis is critical in limiting thrombotic events.

Bottom line: Hmm. This abstract confuses me a little. Actually, I had expected a higher VTE rate in this patient group. I’ve seen reports 2x to 3x higher than reported here. But yes, I do believe that these patients are at high risk.

And looking at the chart, it appears that there is a trend toward higher rates in patients who missed doses rather than those who did not. But the real questions are:

My impression of this study is that it shows some interesting trends, but probably doesn’t include enough subjects to know the real answer for sure.

Here are my questions for the authors / presenter: