Welcome to the current newsletter. This issue is devoted to an uncommon yet somewhat troubling problem, fat embolism. Here are some of the things I cover:

The March issue will be released to subscribers late this month and will cover a potpourri of interesting little tidbits. I’ll release it to everyone via this blog in April, so subscribe now if you want it sooner! 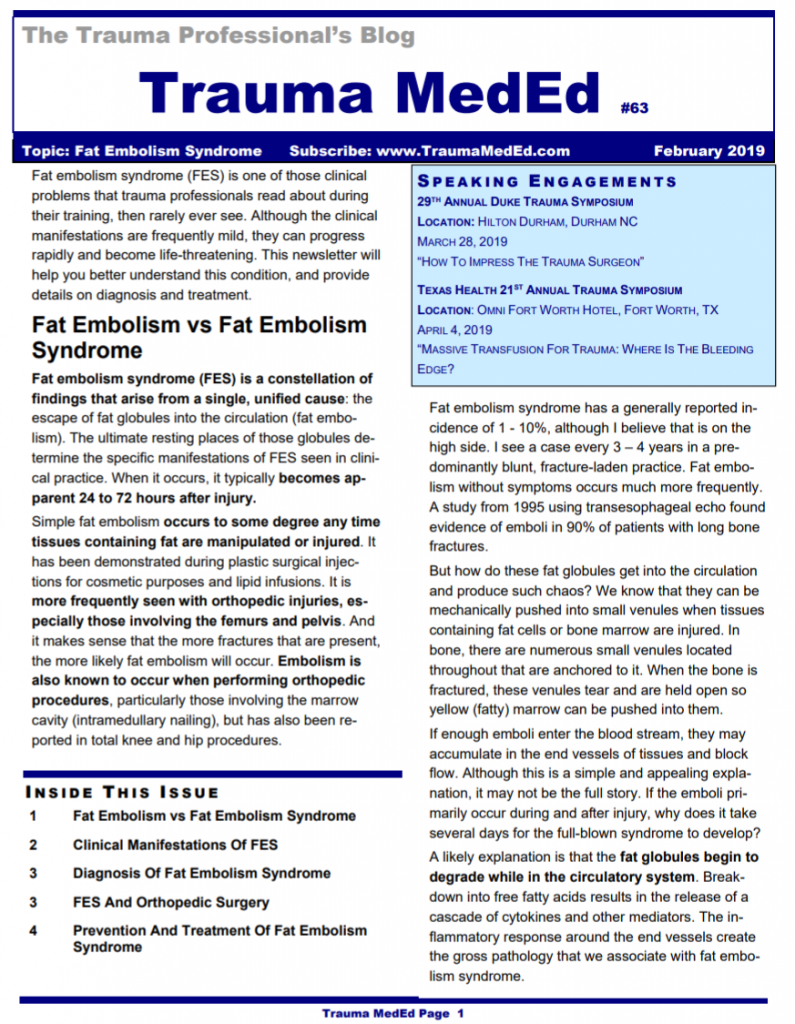 Early and appropriate resuscitation is critical in any severely injured trauma patient. Typically, the trauma team assesses the patient upon arrival and makes a determination as to what type of resuscitation fluids are most appropriate. If blood is judged to be necessary, individual units can be given, or the massive transfusion protocol (MTP) can be activated.

I’ve previously written about two objective methods to assist in the decision to activate your MTP, shock index (SI) and assessment for blood comsumption (ABC). These have traditionally been applied once the patient arrived. What would happen if you used prehospital information to calculate the ABC score and were able to activate your MTP sooner rather than later?

The group at the University of Colorado in Aurora studied this concept. The charge nurse captured information to calculate the ABC score from the initial prehospital information received by phone while the patient was enroute. He or she would then activate the MTP in order to have blood products delivered as close to patient arrival as possible.

They reviewed their experience over a 29-month period. The first 15 months used their original system, calculating ABC on arrival and then deciding whether to activate MTP. During the final 14 months, it was calculated prior to patient arrival and the MTP was “pre”-activated when the score was 2 or more. The primary outcome studied was mortality, and secondary variables were appropriate activation of MTP, and adherence to balanced resuscitation ratios.

Bottom line: The authors actually rolled two studies into one here. The main focus of the paper was to look at use of ABC score using prehospital information, but they also changed their MTP setup at the same time. During the initial part of the study, they did not have thawed plasma available, so the first cooler contained only red cells. Plasma was delivered when available, usually about 45 minutes after the first cooler had arrived. Post-implementation, thawed plasma was included in the first cooler.

So is the reduction in mortality (only in penetrating injury) due to early availability of the entire cooler, or because the desired product ratios were much more consistently met? Unfortunately, we can’t know.

This is a relatively small study, but the results with respect to blood actually being given, attainment of ratios, and mortality are impressive. Is the takeaway message to activate MTP early based on prehospital info or to make sure all coolers stock plasma? My take is that it’s probably best to do both!

Reference: Effect of pre-hospital use of the assessment of blood consumption score and pre-thawed fresh frozen plasma on resuscitation and trauma mortality. JACS 228:141-147, 2019.

It’s nice to have blood available early when major trauma patients need it. Unfortunately, it’s not very practical to have several units of O neg pulled for every trauma activation, let alone activate a full-blown massive transfusion protocol (MTP). Is there any way to predict which trauma patient might be in need of enough blood to trigger your MTP?

The Mayo Clinic presented a paper at the EAST Annual Meeting several years ago that looked at several prediction systems and how they fared in predicting the need for massive transfusion. Two of the three systems (TASH – Trauma Associated Severe Hemorrhage, McLaughlin score) are too complicated for practical use. The Assessment of Blood Consumption tool is simple, and it turns out to be quite predictive.

Here’s how it works. Assess 1 point for each of the following:

A score >=2 is predictive of massive transfusion. In this small series, the sensitivity of ABC was 89% and the specificity was 85%. The overtriage rate was only 13%.

The investigators were satisfied enough with this tool that it is now being used to activate the massive transfusion protocol at the Mayo Clinic. Although the abstract is no longer available online, it appears to be remarkably similar to a paper published in 2009 from Vanderbilt that looks at the exact same scoring systems. Perhaps this is why it never saw print? But the results were the same with a sensitivity of 75% and a specificity of 86%.

Here’s a summary of the number of parameters vs the likelihood the MTP would be activated:

Bottom line: ABC is a simple, easy to use and accurate system for activating your massive transfusion protocol, with a low under- and over-triage rate. It doesn’t need any laboratory tests or fancy equations to calculate it. If two or more of the parameters are positive, be prepared to activate your MTP, or at least call for blood!

In my next post, I’ll look at the impact of using ABC based on prehospital information.

Trauma professionals worry about stuff. Like just about everything, really. Sometimes we have good guidance (research) to help us decide what to do. Many times, we don’t. Management of rhinorrhea and otorrhea from CSF leak after trauma is definitely one of those things.

I’ve seen a variety of treatments used in these patients over the years. Is it really a CSF leak? Let’s get a beta-2 transferrin test (see below). Can’t the patient get meningitis? Their may be concomitant sinus fracture and bacterial contamination, so why not give antibiotics? Or vaccinate them?

The Cochrane library contains a vast number of reviews of common clinical questions. One of those questions just happens to be the utility of giving prophylactic antibiotics in patients with basilar skull fracture. Interestingly, they’ve been reviewing and re-reviewing this question about every 5 years, since 2006. During the three reviews done, there have been no additional research papers published on the topic.

Bottom line: There is still no good evidence to support the use of prophylactic antibiotics or meningitis vaccination in patients with CSF leak from uncomplicated basilar skull fracture. When you see surveys that show some physicians promoting a treatment and others doing nothing, it means there is most likely no significant benefit. If there were a big difference, we would have seen it by now! And giving drugs (antibiotics, vaccines) that have no proven use is expensive and can always lead to unexpected complications.

The management of CSF leaks after trauma remains somewhat controversial. The literature is sparse, and generally consists of observational studies. However, some general guidelines are supported by large numbers of retrospectively reviewed patients.