More MTP stuff! Every trauma center has a massive transfusion protocol, and current literature encourages them to try to achieve an “optimal” transfusion ratio. The literature has converged on a red cell to plasma ratio of somewhere between 1:1 and 2:1. Less has been written about platelet ratios, and trauma centers often don’t pay as much attention to this ratio when reviewing MTPs.

But is it important? The trauma group at the Massachusetts General Hospital examined the impact of platelet ratios on mortality in patients undergoing MTP. This was another TQIP data analysis, performed over a nine year period.

The authors defined massive transfusion as ten or more units of PRBC in the first 24 hours, or any number of units of red cells, plasma, or platelets given within the first four hours. They also defined “balanced” as a ratio of RBC to FFP and RBC to platelets <2. Multivariate regression analysis was performed to gauge the impact of ratios and achievement of a balanced resuscitation on 24-hour mortality.

The authors concluded that the platelet component of the MTP was frequently out of balance, and that it is associated with mortality to a greater degree than with unbalanced plasma. 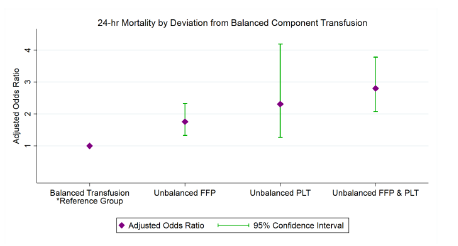 Bottom line: This paper confirms my observations that trauma centers pay a lot more attention to the red cell to plasma ratio and don’t get as excited when the platelets are out of line. Part of this is probably due to confusion over how to count platelet packs. Typically they are delivered in packs called “pheresis” or “apheresis.” Each is the equivalent of about 6 units of platelets (check with your blood bank for more exact numbers). This means that a ratio of 6 RBC to 5 plasma to 1 platelets would be considered balanced. But a ratio of 28:28:2 would not.

According to this abstract, the use of sufficient platelets is important. This makes sense. However, the exact mechanism cannot be determined from this type of study. It could be a direct effect of not having enough platelets to form good clot. Or it could be something completely outside the clotting mechanism, just an association with something in the care processes that occurs as these patients undergo resuscitation.

The why doesn’t matter so much, though. This abstract presents compelling data that suggests that we really need to pay attention to the platelet ratios given during the MTP. They should be analyzed just as closely as plasma ratios during PI review, and changes to the MTP process implemented to normalize this important ratio.

This was a nicely done abstract, and I look forward to the live presentation and the finished manuscript!

In my last post, I discussed the growing number of choices for plasma replacement. Today I’ll look at some work that was done that tried to determine if any one of them is better than the others when used for the massive transfusion protocol (MTP).

LQP is not used at most US trauma centers. It is more commonly used in Europe, and a study there suggested that the use of thawed plasma increased short term mortality when compared to liquid plasma. To look at this phenomenon more closely, a group from UTHSC Houston and LSU measured hemostatic profiles on both types of plasma at varying times during their useful life.

All products were analyzed with thromboelastography (TEG) and thrombogram, and platelet count and microparticles, clotting factors, and natural coagulation inhibitors were measured. They chose 10 units of thawed FFP and 10 units of LQP, and assayed them every 5 days during their useful shelf life.

Bottom line: Liquid plasma sounds like good stuff, right? Although there are a few flaws in the collection aspect of this study, it gives good evidence that never frozen plasma has better coagulation properties when compared to thawed plasma. Will this translate into better survival when used in the MTP for trauma? One would think so, but you never really know until you try it. Our hospital blood bank infrastructure isn’t prepared to handle this product yet, for the most part. What we really need is a study that shows the survival advantage when using liquid plasma compared to thawed. But don’t hold your breath. It will take a large number of patients and some fancy statistical analysis to demonstrate this. I think we’ll have to look to our military colleagues to pull this one off!

An anonymous user recently asked about decision-making with regard to anticoagulation reversal. Specifically, they were interested in using prothrombin complex concentrate (PCC) vs activated Factor VII (FVIIa). I’ve done a little homework on this question, and am going to include some information on the use of fresh frozen plasma (FFP), too.

Unfortunately, there’s not a lot of good data out there comparing the three. Enthusiasm for using FVIIa is waning because it is extremely expensive and the risk/benefit ratio is becoming clearer with time (more risk and less benefit than originally thought). PCC is attractive because it provides most of the same coagulation factors as FFP, but with far less volume. However, it is very expensive, too.

What to do? One of the best papers out there comes from the UK, where they looked at the cost effectiveness of PCC vs FFP in warfarin reversal. They reviewed a year’s worth of National Health Service patients from the standpoint of what it costs to gain a year of life after hemorrhage. They found that the cost was £1000-£2000 per life-year, and £3000 per quality adjusted life-year. This was more cost effective than using FFP. Unfortunately, I do not have access to the full text to review the details.

PCC has only been compared to FFP in the treatment of hemophilia, so it’s not possible to draw any conclusions. The course of therapy for perioperative management of hemophiliacs is lengthy (meaning hideously expensive), and there was a cost-savings seen ($400,000)! Since we use only short duration therapy in trauma patients, the savings will be far less.

Bottom line: PCC is probably as effective as FFP, with less risk of volume overload. It is probably more cost effective as well. As the population of people that are placed on warfarin ages and becomes more susceptible to volume overload from plasma infusions, I think that PCC is going to become the reversal agent of choice. Use of Factor VIIa will continue to wane. However, someone needs to do some really good studies so we don’t get suckered.