REBOA (Resuscitative Endovascular Balloon Occlusion of the Aorta) is a “newer” resuscitative technique that has actually been around since the Korean War. It was first used to treat two injured soldiers, and although they ultimately died, it spurred research into the technique and its applications.

Balloon occlusion techniques were then adopted by vascular surgeons and were found to be useful as an adjunct in managing ruptured abdominal aneurysms. A slow trickle of studies on human use in trauma began to surface. But when autopsy studies carried out during the Gulf War showed that uncontrolled torso hemorrhage was a major cause of death, research in the technique exploded.

First, there were a rash of pig studies evaluating the feasibility of using a percutaneously placed occlusion device in the early 2010s. This transitioned to human studies around 2014, and after that we were off to the races. Over 100 papers on REBOA are now published each year.

REBOA has been shown to have some advantage in patients with abdominal or pelvic sources of bleeding. The catheter is inserted in the groin and the balloon inflated in one of two zones, depending on the location of the hemorrhage (see diagram below). For abdominal bleeding, it is inserted just above the diaphragm in Zone I. For pelvic bleeding, it is inserted below the takeoff of the visceral arteries and above the aortic bifurcation, in Zone III. 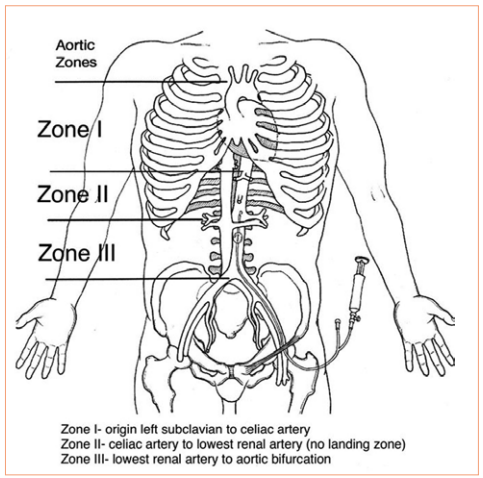 In the US, REBOA catheters are only inserted upon arrival to the hospital. There are a few random reports of field placement where a physician is part of the prehospital team. By definition, this technique is generally not available in austere environments, only upon arrival in the emergency department.

Researchers at the University of Michigan began looking for an alternative technique that could be applied in the field by non-physicians. They noted the close anatomic relationship of the distal esophagus, proximal stomach, aorta, and thoracic vertebrae, and designed a device to compress the aorta against the spine in this area.

They developed a prototype device which they named GROA (gastro-esophageal resuscitative occlusion of the aorta). It consists of a gastro-esophageal tube with an ovoid balloon, an air pump with pressure measurement device, and an external compression device. Here is a picture of the device: 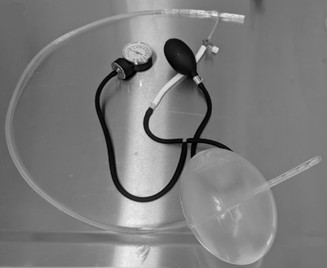 And here’s a diagram of what it looks like when inserted: 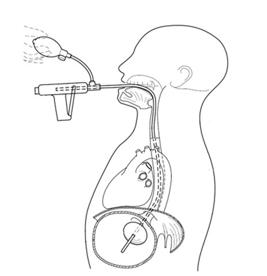 The tube is inserted and the balloon inflated. The external compression device is then placed around the patient, with the top plate located over the epigastrium and the bottom plate under the patient. It is designed to apply anterior pressure over the balloon, but to avoid circumferential constriction of the abdomen. 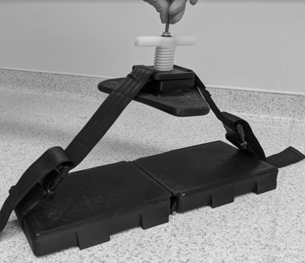 Bottom line: This device is an interesting development in the balloon occlusion space. As with early studies of REBOA, GROA is currently being investigated using a pig model. If it appears to be beneficial, it will still be several years before it makes the jump to human subjects. If effective, this concept would allow prehospital providers to apply some degree of hemorrhage control when it originates in the abdominal cavity.

There are currently exactly three papers on this new technique, and I have included the references below if you are interested in reading them. I’m sure there are many more to come and it may eventually be competing with REBOA for journal space.

There is one consideration to be aware of when reading these papers that is similar to much of the research on REBOA. Two of the authors have a financial interest in the company that licenses the GROA technology. And in the most recent study, another one of the authors is an advisory board member for one of the manufacturers of REBOA catheters. For these reasons, it is less likely that they will publish papers that are not favorable to the product. So read critically!