The rapid infusion pump is a mainstay of high volume trauma resuscitation. According to the manufacturers, these devices can now deliver fluids at up to 1000 ml/minute. Or can they?

Here is a chart from the manufacturer of the Belmont rapid infuser. This shows the (theoretical) flow rates achievable for each of their two devices (max flow rate of 750 ml/min and 1000 ml/min models). The charts show the maximum flow rates for crystalloid or blood for various sizes of IV catheters that are 2″ long. 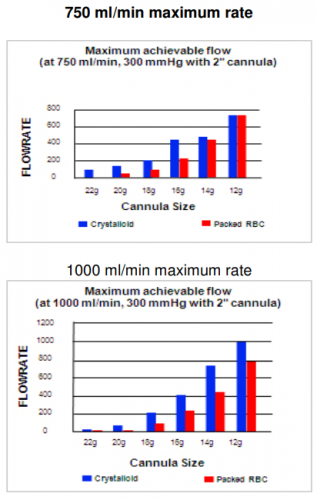 These observations can be explained by something I’m sure you haven’t thought about since high school physics: Pouiseulle’s Equation. Of course you remember, right?

So let’s put all these numbers together. Let’s assume that we are using balanced resuscitation and are infusing lots of blood, not crystalloid. The choice of IV catheter is the most important factor for a successful volume resuscitation! Here’s a table I constructed that lists the approximate relative flow rates for several catheter types. I use a 9 Fr introducer as the gold standard and have defined the flow rate for that device as 1.

Bottom line: High-speed volume resuscitation forces us to squeeze a thick (and hopefully warm) liquid through a small straw into our patient’s vein. The smaller and longer the straw, the harder it is to do that. I think that people underestimate how much of an impact the choice of catheter makes.

Always use the largest and shortest possible access for rapid infusion. Ideally, this should be a large, straight introducer. Some have a side port (e.g. Cordis) at a right angle to the catheter, but this introduces some extra resistance and will slow the infusion rate. A large bore (14 Ga) short (2 inch) IV catheter is good, but will only flow at one sixth the rate of an introducer.

And never use anything with more than one lumen! The typical triple lumen catheter has three lines that are either 20 or 21 Ga. They are tiny and very long. Looking at the table above, you will be lucky to infuse a few cc’s per minute through one of these, compared to hundreds of cc’s via a straight introducer.

This is the final installment of my series on the tertiary survey for trauma.  For years, this exam was performed by trauma surgeons or residents. However, over the years advanced practice providers (APPs) such as physician assistants and nurse practitioners have become more common in trauma. It is now commonplace for these providers to participate on the trauma service, perform procedures, and document examinations such as the tertiary survey.

But until now, no one has compared the accuracy of this exam when performed by a physician vs an APP. One would assume that the results should be the same, but as we’ve seen time and time again, common sense doesn’t always pan out. A group at the Royal Brisbane and Women’s Hospital in Queensland, Australia tried to answer this question using a retrospective review of their experience.

This busy trauma center admits about 2,250 patients per year, and began to employ clinical nurse consultants on the trauma service nearly ten years ago. Since there was no formal trauma curriculum for these nurses, they were required to complete the Trauma Nursing Core Curriculum (TNCC) or an equivalent prior to hire. The nurses were supervised by one of the trauma / emergency physicians.

For this study, 165 patients who underwent a tertiary survey by both an emergency medicine resident and a trauma nurse over a three year period were reviewed. The surveys were typically performed within 24 hours of admission to a ward bed or 24 hours before transfer from ICU to the ward. Typically, the resident and nurse tertiary surveys were performed within 30 minutes of each other to avoid any effects from injury progression.

All missed injuries were graded for severity by an attending physician using the Clavien-Dindo system. Here’s what it looks like: 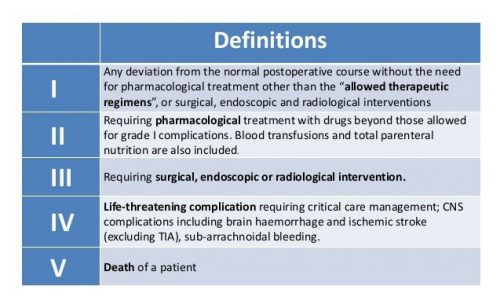 The authors concluded that performance of the nurses was similar to that of the house officers.

Bottom line: Maybe the authors were trying to be gentle on their residents. But it looks to me like the trauma nurses did a much better job of finding occult injuries. I wish the authors had broken down the C-D scores to see which group identified the score III patient.

To be fair, this study has some significant limitations. Out of more than 3,000 eligible patients, only 165 had a dual tertiary survey. So the sample may not be representative. But the results were impressive enough that I would speculate the results of a larger group may be similar.

So I think it is safe to assume that APPs (specifically nurse practitioners, but this can probably be generalized to physician assistants as well) can do a tertiary survey just as well as a resident. And possibly better!

Here’s the second part in my series on the tertiary survey for trauma. In my last post I discussed the basics, and in the next and final one I’ll review who can do it.

Delayed diagnoses / missed injuries are with us to stay. The typical trauma activation is a fast-paced process, with lots of things going on at once. Trauma professionals are very good about doing a thorough exam and selecting pertinent diagnostic tests to seek out the obvious and not so obvious injuries.

But we will always miss a few. The incidence varies from 1% to about 40%, depending on who your read. Most of the time, they are subtle and have little clinical impact. But some are not so subtle, and some of the rare ones can be life-threatening.

The trauma tertiary survey has been around for at least 30 years, and is executed a little differently everywhere you go. But the concept is the same. Do another exam and check all the diagnostic tests after 24 to 48 hours to make sure you are not missing the obvious.

Does it actually work? There have been a few studies over the years that have tried to find the answer. A paper was published that used meta-analysis to figure this out. The authors defined two types of missed injury:

Bottom line: In the complex dance of a trauma activation, injuries will be missed. The good news is that the tertiary survey does work at picking up many, but not all, of the “occult” injuries. And with proper attention to your patient, nearly all will be found by the time of discharge. Develop your process, adopt a form, and crush missed injuries!

I’m posting a three part series on the trauma tertiary survey. Today, I’ll cover the basics. In the next two posts I’ll dig into how well it works and who can do it.

Major trauma victims are evaluated by a team to rapidly identify life and limb threatening injuries. This is accomplished during the primary and secondary surveys done in the ED. The ATLS course states that it is more important for the team to identify that the patient has a problem (e.g. significant abdominal pain) than the exact diagnosis (spleen laceration). However, once the patient is ready for admission to the trauma center, it is desirable to know all the diagnoses.

This is harder than it sounds. Physical examination tends to direct diagnostic testing, and some patients may not be feeling pain, or be awake enough to complain of it. Injuries that are painful enough may distract the patient’s attention away from other significant injuries. Overall, somewhere between 7-13% of patients have injuries that are missed during the initial evaluation.

A well-designed tertiary survey helps identify these occult injuries before they are truly “missed.” This survey consists of a structured and comprehensive re-examination that takes place within 48-72 hours, and includes a review of every diagnostic study performed. Ideally, it should be carried out by two people: one familiar with the patient, and the other not. It is desirable that the examiners have some experience with trauma (sorry, medical students).

The patients at highest risk for a missed injury are those with severe injuries (ISS>15) and/or impaired mental status (GCS<15). These patients are more likely to be unable to participate in their exam, so a few injuries may still go undetected despite a good exam.

I recommend that any patient who triggers a trauma team activation should receive a tertiary survey. Those who have an ISS>15 should also undergo the survey. Good documentation is essential, so an easy to use form should be used. Click here to get a copy of our original paper form. We have changed over to an electronic record, and have created a dot phrase template, which you can download here.

In my next post: Does the tertiary survey actually work?

The July issue of Trauma MedEd will be sent out to subscribers near the end of the month. It will review some topics that I find very interesting, and I hope you will to.

This issue is being released to subscribers by July 30. If you sign up any time before then, you will receive it, too. Otherwise, you’ll have to wait until it goes out to the general public at the end of next week. Click this link right away to sign up now and/or download back issues.

In this issue, learn about:

As always, this month’s issue will go to all of my subscribers first. If you are not yet one of them, click this link right away to sign up now and/or download back issues.