I learned something new today: the Zumkeller index. Exciting! Most trauma professionals who take care of serious head trauma have already recognized the importance of quantifying extra-axial hematoma thickness (HT) and midline shift (MLS) of the brain. Here’s a picture to illustrate the concept: 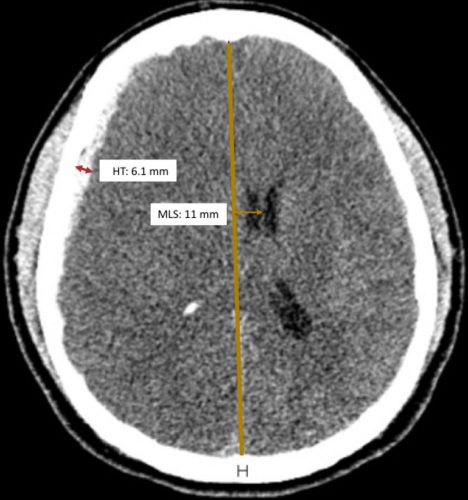 Zumkeller and colleagues first described the use of the mathematical difference between these two values in prognosticating outcomes in severe TBI in 1996.

Intuitively, we’ve been using this all along. At some point, we recognized that if the degree of midline shift exceeds the hematoma thickness, it’s a bad sign. The easiest way to explain this is that there is injury to the brain that is causing swelling so the shift is greater than the size of the hematoma.

The authors of the current paper from Brazil decided to quantify the prognostic value of the ZI by doing a post-hoc analysis of a previously completed prospective study.  They limited their study to adult patients with an acute traumatic subdural hematoma confirmed by CT scan. It used data from the 4-year period from 2012-2015.

They compared demographics and outcomes in three cohorts of ZI:

And here are the factoids:’ 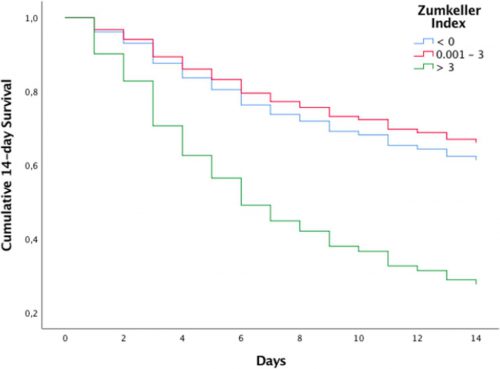 Bottom line: This study confirms and quantifies something that many of us have been unconsciously using all along. Of course there are some possible confounding factors that were not quantified in this study. Patients with the more severe injuries tended to also have subarachnoid hemorrhage and/or intra-ventricular blood. Both are predictors of worse prognosis. But this is a nice study that quantifies our subjective impressions.

The Zumkeller Index is an easily applied tool using the measuring tool of your PACS application. It can be used to determine how aggressively to treat your patient, and may help the neurosurgeons decide who should receive a decompressive craniectomy and how soon.

You’re hooked! You are thinking back to a number of cases that you think might have done better with a hybrid room. And now let’s assume you already have one in your OR suite. Now what do you do? Here’s my final post in this series to give you some things to think about.

The key is to avoid jumping right in and sending your next eligible patient straight to that room. You absolutely must take some time to develop policies and guidelines to make sure things go smoothly.

Here are some important things to think about:

And I’m sure there are more details that I haven’t thought of. If you have some helpful suggestions, policies, or protocols, please share them with me!

In my last post I reviewed several older papers that showed some positive associations with the use of a hybrid room for trauma patients. However, these rooms were not dedicated to the trauma patient. This means that they may not be staffed at all hours, or other elective cases could be scheduled in them. In either case, there were periods of time where the hybrid room might not be available for trauma procedures.

A study of the experience of one trauma center (University of Florida, Gainsville) with a truly dedicated, always available hybrid room for trauma patients was published just last month. Three and a half years of experience with the room was compared with historical controls from a similar period of time before implementation.  Patients younger than 18 were excluded, as were patients operated for reasons other than bleeding control (i.e. emergent trach). The room itself was a repurposed and remodeled angiography suite located one floor above the emergency department trauma bays.

Bottom line: This paper was a bit problematic for me. I want to believe that a hybrid room is valuable because I’ve been involved with a handful of cases where I believe it made a big difference. And if you read only the abstract or the conclusions of the paper, it sounds great!

Always be careful of papers that go along with your confirmation bias. Read them even more carefully than you normally would. I have a few comments / questions:

I really wanted this to paper to soundly demonstrate how great a dedicated hybrid room is. But what I see is a single-center experience that only shows that it clinically significantly decreases time to hemorrhage control and the incidence of pneumonia and not much more. The authors hit the nail on the head with their last sentence:

I will keep waiting for the next paper and hope it really answers these questions! This one left me wanting a lot more. 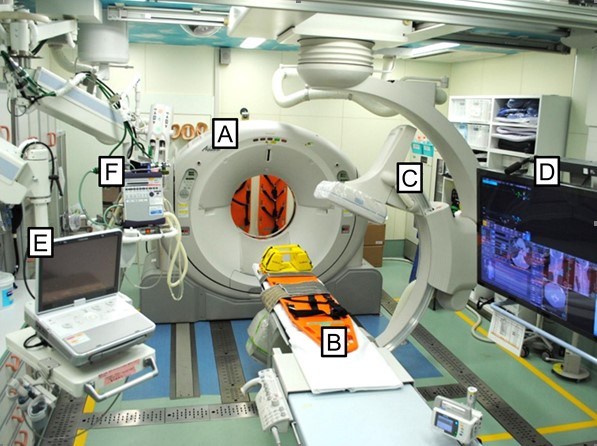 In my next post, I’ll review a very new (2020) paper specifically on the hybrid room for trauma.

Next post, is the hybrid OR for trauma useful?