I started off the week describing a study using a new version of the REBOA catheter (Resuscitative Endovascular Balloon Occlusion of the Aorta) that was smaller than the more commonly used one. Today I’ll put both side by side and describe the similarities and differences.

First, let’s start with the current market leader, the ER-REBOA catheter by Prytime Medical in Boerne, TX. Here’s a picture provided by the company:

And here’s a photo of the Frontline Medical Technologies COBRA-OS, based in London, Ontario, Canada. This acronym stands for Control of Bleeding, Resuscitation, Arterial Occlusion System. Now, REBOA is used by surgeons as a general descriptor for this type of technology. I assume that Frontline does not include REBOA in the name of this product since Prytime has incorporated it into theirs. 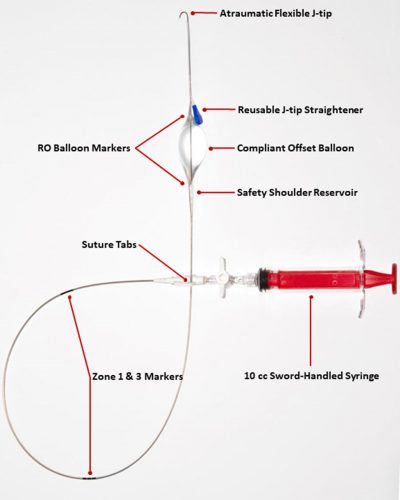 There are a number of similarities, as well as some key differences. Let’s start at the tip and make our way back to the syringe.

Catheter tip: Prytime has a trademarked “P-tip” which has a little extra curl compared to the Frontline’s flexible j-tip. The Prytime version is designed to “help reduce catheter migration and aid in positioning. Although a guidewire can be inserted into either to assist in repositioning, it does not enter the P-tip. And note, neither device requires a wire for insertion.

Arterial line port: This is only found on the Prytime device. This is located just distal to the balloon so arterial pressures can be measured above the catheter after inflation. This port extends through the catheter, terminating in a hub that can be connected to standard pressure transducer equipment. The Frontline device is too small to incorporate this feature.

Balloon: The Prytime balloon is a more standard ovoid shape. The company provides guidelines of 8cc inflation for Zone I and 2cc for Zone III. This can be adjusted based on confirmation of occlusion provided by the arterial pressure wave form. The Frontline device has an “ice cream cone shaped” balloon with the taper proximally and a “safety shoulder” to protect the balloon. The company claims that this design helps reduce the likelihood of rupture. The balloon will accept 13cc at maximum inflation. Since there is no arterial line, alternate means (palpation, ultrasound, or a transducer in the insertion port) must be used to determine degree of occlusion.

Sheath: The Prytime product has a peel-away sheath that is used to cover the P-tip to straighten it. This unit is then inserted into the previously placed access port. Once inserted the sheath is peeled away after the balloon has passed the end of the port. The Frontline device does not have a sheath, but includes a reusable j-tip straightener on the catheter. This straightens the tip as it passes through the port.

Access port: These are included with both products and are inserted using typical Seldinger technique. Both have a side port for fluid infusion. The side port of the Frontline product can be used as an arterial pressure monitor. The port is 7Fr in the Prytime product and 4Fr for Frontline. This smaller size may decrease the incidence of vascular thrombosis or vessel injury requiring repair after removal.

Bottom line: I’ve described two different products that allow trauma professionals to use the REBOA concept. This evolution demonstrates the usual cycle of new product and feature refinement that we have come to expect in medical devices.

Is one “better” than the other? That’s probably not the right question. More likely, it will boil down to which one is right for a particular patient or situation. Only time, and lots of additional research, will tell.

I have no financial interest in either of these companies