I love this topic, especially since I’m getting a bit long in the tooth myself. The impact of night call is significant, even if it’s less noticeable in my younger colleagues. Theories (and some real data) abound that long stretches of stressful work is unhealthy and may lead to burnout. Modifications such as reduced call length or varying work type have been tried, but there is little data showing any real effect.

The trauma group at Grant Medical Center in Columbus, Ohio performed a month-long prospective study involving six Level I trauma centers. They set out to monitor fatigue levels  due to varying call shift schedules and duration, and to see if they could identify any relationship to risk of surgeon burnout.

The authors used an actigraphy type device to monitor fatigue using an unspecified alertness model. These devices are typically worn on the wrist, and have varying levels of sophistication for determining sleep depth and fatigue. The surgeons self-reported their daily work activities as “academic”, “on-call”, “clinical non-call”, or “not working” and the lengths of time for each. A validated burnout inventory was taken at the end of the study to gauge burnout risk. The impact of 12 vs 24 hour call shifts was judged based on these variables.

The authors concluded that fatigue levels relate to call length and correlate strongly with fatigue going into the call shift. They also noted that the longer shifts brought fatigue levels to a point that errors were more likely. They did not find any relationship to burnout.

There are a lot of things here that need explanation. First, the quality of the measurement system (actigraph) is key. Without this, it’s difficult to interpret anything else. And the significance data is hard to understand anyway.

The burnout information is also a bit confusing. Other than putting an actigraph on the surgeons and having them log what they were doing, there was no real intervention. How can this possibly correlate with burnout?

The authors are trying to address a very good question, the relationship between call duration, configuration, fatigue, and error rates. More importantly, but less studied in trauma professionals, is the impact of disrupted sleep on the health and longevity. These are very important topics and I encourage the authors to keep at it!

A little further down the direct oral anticoagulants (DOACs) rabbit hole please? The abstract reviewed in my last post suggested that elderly patients taking these agents actually do better than those on warfarin. So if that’s the case, do we need to be so attentive to getting followup CT scans on these patients to ensure that nothing new and unexpected is happening?

The trauma group at UCSF – East Bay performed a multi-center review of the experience at “multiple” Level I trauma centers over a three year period. They included anticoagulated patients with blunt trauma who had a negative initial head CT. Patients taking only an anti-platelet agent or a non-oral anticoagulant were excluded.  They analyzed the data for new, delayed intracranial hemorrhage, use of reversal agents, neurosurgical intervention, readmission, and death.

The authors concluded that this “largest study” suggests that DOACs “may” have a better safety profile compared to warfarin and repeat head CT is not indicated.

Now, hold on a minute!

Rule #1: No single published paper should ever change your practice. They need to be confirmed by other, hopefully better work.

Rule #2: No single abstract should make you even think about changing your practice! These are preliminary works that always need more detail, more effort, and a lot more thought. They are meant to telegraph what the authors are working on and to raise interesting questions from the audience. They should stimulate others to try to replicate and improve upon the work. In general, if something looks really good as an abstract, the next step is successful publication. This means that peers have reviewed the data and agree that it looks promising. But then it should take several years of work by the original authors and others to prove or refute the claims.

This study was small in the first place, and became smaller because half did not have repeat CT scans. The only statistically significant result was that we confirmed that the providers were not very good about getting followup scans. Just because they didn’t do it doesn’t mean it’s not indicated, especially given the nature of the data and the very small numbers.

I consider this another very small piece in the puzzle that suggests DOACs are not as evil as warfarin. There are several of these low power studies floating around right now. But we need to hunker down and really do a big study right so we can start to get a clearer picture of what we should do. For now, it’s best to treat all anticoagulants and anti-platelet agents as evil and err on the side of overtreating.

Here are my comments and questions for the presenter and authors:

I’m sure there will be some lively debate at the end of this presentation! 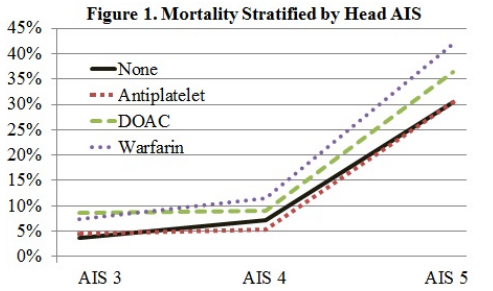 Brace yourselves, this one is going to be intense! I selected the next paper due to its use of an unusual modeling technique, the random forest model (RFM). What, you say, is that? Exactly!

The RFM is a relatively new method (5 years old for trauma stuff) that uses artificial intelligence (AI) to try to tease out relationships in data. It is different from its better known cousin, the neural network. The RFM tries to strike a balance of flexibility so that it can deduce rules from data sets that may not otherwise be apparent.

The authors from the trauma program at Emory in Atlanta wanted to develop a predictive model to identify factors leading to acute kidney injury in trauma patients. They assembled a small data set from 145 patients culled over a four year period. Some esoteric lab tests were collected on these patients (including serum vascular endothelial growth factor and serum monocyte chemoattractant protein-1), the sequential organ failure assess score (SOFA) was calculated, and then all was fed to the machine learning system.

The authors go into some detail about how they accomplished this work.  The main results are the sensitivity and specificity of both the RFM analysis. The RFM numbers were also converted to a regression equation and similarly examined. The area under the receiver operating characteristic curve (AUROC) was calculated for both.

Here are the factoids when using SOFA and the two biomarkers above:

The authors conclude that the biomarkers “may have diagnostic utility” in the early identification of patients who go on to develop AKI and that “further refinement and validation” could be helpful.

But the real problem here is with the results. At this point, they are weak at best. The algorithm predicts only 4 of 5 actual cases of AKI correctly and identifies barely more than half of patients who don’t. Coin toss. A good AUROC number is better than 0.8. The ones obtained here are fair to poor at best.

I understand that this is probably a pilot study. But it seems unlikely that adding more data points will help, especially if the same input parameters are to be used in the future. I think this is an interesting exercise, but I need help seeing any future clinical applicability!