The first EAST abstract I will discuss is the very first to be presented at the annual meeting. This is a prospective, observational studied that was carried out at the University of Pittsburgh. It looked at the association between repeated rapid thromboelastography (rTEG) results in pediatric patients and their death and disability after plasma administration. They specifically looked at the degree of fibrinolysis 30 minutes after maximum clot amplitude and tried to correlate this to mortality.

For those of you who need a refresher on TEG, the funny sunfish shape above shows the clot amplitude as it increases from nothing at the end of R, hits its maximum at TMA, then begins to lyse. The percent that has lysed at 30 mins (LY30%) gives an indication if the clot is dissolving too quickly (LY30% > 3%) or too slowly (LY30% < 0.8%).

The authors selected pediatric patients with TBI and performed an initial rTEG, then one every day afterward. They looked at correlations with transfusion of blood, plasma, and platelets.

Bottom line: There is a lot that is not explained well in this abstract. It looks like an attempt at justification for using TEG in place of chasing INR in pediatric TBI patients. This may be a legitimate thing, but I can’t really come to any conclusions based on what has been printed in this abstract so far.

The EAST Annual Scientific Assembly is just around the corner. The meeting takes place January 9-13 at Disney World in Orlando. As in previous years, I am going to select some of the more interesting (to me) podium abstracts and analyze them, one per day until the meeting. I will pick them apart, provide some clinical perspective, and most importantly, provide a bullet list of questions the presenter may hear at the podium. Hint, hint. 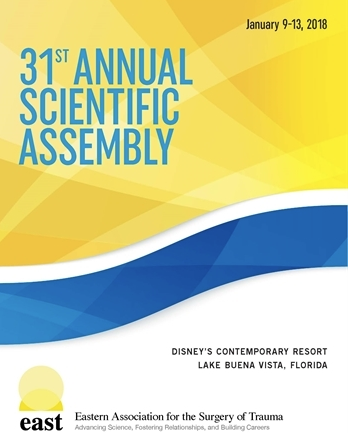 On Christmas day, I’ll publish the list of abstracts that I’ll be reviewing. Then daily, until the meeting is over, I’ll tease one apart for you. Stay tuned!