Well, it took me a month to figure out that one of my pop quiz answers was posted to the wrong area! The link provided with the tweet would have gotten you to it, but those who were following along on tumblr may have been mystified. Here’s the answer again.

Here’s a link to the original post/quiz.

So the question was to guess the exact mechanism of injury given the x-ray below. The image shows a stomach bubble located in the left chest, indicating a left sided diaphragm rupture. In countries with left sided drivers, this is a classic injury from a t-bone type impact directly on the driver side door. The arm rest is driven into the driver’s flank, or on occasion the driver is partially ejected through the window. The impact raises abdominal pressure abruptly and can push the abdominal contents (typically stomach, followed by spleen) through the weakest area of the diaphragm.

Practical tip: These patients may present with tachypnea and decreased breath sounds on the left side. The usual reflex is to insert a chest tube, which is unneeded and won’t help in this case. What the patient really needs is an NG tube to help their breathing (and an immediate trip to the OR). So if you encounter this clinical combination plus a significant left sided impact (car crash, pedestrian struck), get a chest x-ray first if the patient’s condition will tolerate it.

And again, hats off to precordialthump for getting it exactly right!

Figure It Out! The Answer

Several readers emailed the correct answer yesterday. The picture is a child with a bicycle handlebar injury to the epigastrium. The plastic grip over the end of the handlebar has a small hole in the middle leaving the distinctive mark seen in the photo.

Children are more likely to sustain significant injuries from this mechanism because they have little muscle in their abdominal wall, so it can’t protect as well as it does in adults. Everything between the handlebar and the spine gets crushed together, frequently resulting in serious injury.

I’ve listed them in what I believe to be the usual order. The literature varies a bit because there aren’t a lot of series published. In this case, the injury was a pancreatic transection.

Bottom line: Handlebar injuries in children (and to a lesser degree, adults) are a significant marker for serious abdominal injury. CT scan is mandatory to find the diagnosis. Proper management of a pancreatic injury is a good topic for a future post!

This one was a bit tricky. I chose it because it looks like there is an extra tube in the neck. You can see two stripes traveling from the mouth down the neck. The one closest to the cervical spine is in the esophagus, an orogastric tube. The other one passes anterior to it, in the trachea, so it is the orotracheal tube. But what about the tube shaped density that is located in the posterior pharynx that looks like it is angled forward toward the trachea? Did someone lose something?

If you think about it though, you should conclude it’s something weird. There is no radiopaque stripe on it, which rules out most common tubes. The only thing of that size and shape that comes to mind is a nasopharyngeal airway tube. However, these have a flange on the nasal end, so it couldn’t just pass inwards through the nose. And who in their right mind would put it in the mouth to be swallowed? Plus, the orientation of it is unusual, heading forward toward the trachea.

You have to look at the rest of the clues on the radiograph. It’s easy to get suckered if you just focus on the obvious. What are those objects located between the two tube stripes in front of C6? Surgical clips. What are those O-shaped objects at the angle of the mandible that disappear behind the XTABLE LAT marker? Surgical skin closure staples.

So this is a postoperative patient. If you follow the object, it actually moves toward the skin, and beyond! This patient was stabbed in the neck and underwent a surgical exploration with control of bleeding. A surgical drain was placed due to concern for leakage from the pharynx or salivary glands. The drain actually leaves the side of the neck, just anterior to the sternocleidomastoid muscle.

Remember to look at everything on a radiograph, especially if you don’t have the clinical story behind it. The eye normally focuses on the obvious, leading the viewer to make assumptions based on their expectations. This can easily get you in trouble, so beware! And don’t forget that you are looking at a 2-D image, so there is no way to tell where any object is in the third dimension. It may be in the front, the back, or under the patient in their clothing!

The obvious diagnosis is an easy one! An NG tube is seen curled in the stomach, which is located above the diaphragm! This patient has a traumatic rupture of the left diaphragm.

Look at the inside edge of the ribs and the outside of the lung on the patient’s left chest. There is a big, radio-dense gap representing a moderate hemothorax. With injuries to the left diaphragm, the rent is rather large allowing much of the stomach to float up into the chest. The spleen is attached to the greater curve of the stomach by the short gastric vessels. As the stomach moves into the chest, the spleen is dragged up there as well. Typically, it has to squeeze through the hole in the diaphragm and commonly sustains significant injury as it does.

Spleen injury is commonly associated with left diaphragm injury. The usual mechanism for both is blunt force to the left chest and abdomen. It takes major force to rupture the diaphragm, and this is usually associated with t-bone type car crashes on the driver’s side and pedestrians struck on their left side.

Diagnosis is difficult to make by physical exam alone. Breath sounds are decreased on the left, and patients are frequently dyspneic. The most frequent cause for this constellation of symptoms is a pneumothorax or hemothorax, and a chest tube may be inserted on clinical grounds alone. Unfortunately, the tube will not make the symptoms any better. Chest x-ray helps enormously, and an NG tube can be inserted to decompress the stomach and allow better inflation of the left lung when the diaphragm injury is recognized. This will relieve symptoms, but the patient will still need to go promptly to the OR to fix the diaphragm and deal with the spleen. 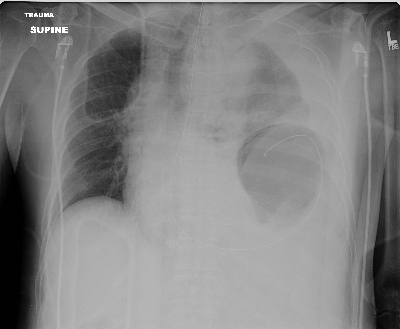