Back in the day when I was a resident when a massively bleeding patient came in, we gave crystalloid. And frequently, a lot of it. The books in those days said slam in two liters of saline or lactated Ringer’s solution. It was believed that there was little downside to crystalloid. Consequently, quite a bit of it was given before we ever thought about blood products.

And there were no systems in place to standardize how blood was requested, what was sent, or how much was used. We generally started off with a bunch of packed red cells. Yes, every now and then we might remember to ask for some plasma, and even less commonly some platelets or cryoprecipitate. Ratios? We didn’t really pay attention. In reality, there were probably four red cell packs to one unit of plasma, on average. And the ratio to platelets was so low it was hard to even measure!

By now, we have plenty of data showing that this crystalloid-heavy resuscitation contributed to coagulopathy and poor outcomes. We’ve adopted a more balanced concept of resuscitation, which of course we call “balanced resuscitation.” What does this term mean? Basically, it’s a combination of restricted crystalloid use, more optimized ratios of blood products, and some degree of permissive hypotension in select patients.

Before we dive more deeply into ratios, let’s agree on the nomenclature. You may hear people talking about a 1:1 ratio, or 2:1:1, or even 1:1:2. Which product is which? Always read the paper or text carefully, as there is no real standard here. Typically, if only two numbers are specified, RBCs are first and plasma second. But when three are given, you must determine whether the red cells are first or last. Here are the most common configurations:

Many papers have been written examining the ratio puzzle. Mortality, complications, renal or lung injury, deep venous thrombosis and pulmonary embolism, lengths of stay, transfusion reactions (of all types), and much more have all been investigated.

The most helpful literature covering transfusion ratios are systematic reviews. The main focus seems to be finding the magic ratio of red cells to everything else. The old-time higher ratios (1:?:4) were generally considered to be inferior, so most research has focused on comparing 1:1:1 to 1:1:2. Here are the main factoids, and all keep to the plasma:platelets:RBC format:

Although systematic reviews try to make up for shortcomings of individual studies, they introduce their own problems. However, they overall seem to indicate that the “magic” ratio lies between 1:1:1 and 1:1:2. Most centers strive for the former, but due to many reasons (e.g. no thawed plasma, delivery issues) more realistically try to stay under the latter.

Bottom line: Think about the logistics in your own trauma center, and design your massive transfusion protocol so that you can maintain a ratio somewhere between 1:1:1 and 1:1:2. Every MTP activation should be analyzed by your trauma performance improvement process and must review your final ratios. One thing I’m sure of is that we will continue to refine this over the coming years, so stay tuned!

Hospital medicine in general, and inpatient trauma care specifically, is now characterized by a series of handoffs. These occur between physicians, trainees, nurses, and a host of other trauma professionals. Many trauma centers have implemented a “morning report” type of handoff, which formalizes part of the process and frequently adds a teaching component.

The group at the University of Arkansas studied the impact of implementing a morning report process on length of stay and care planning. Prior to the study, residents handed off care post-call to other residents without attending surgeon involvement. The morning report process added the presence of the post-call surgeon, and the trauma and emergency general surgery attendings coming on duty. Advanced practice nurses collected information on care plan changes.

Bottom line: This small, prospective study quantifies a few of the benefits of a formal “morning report” process. The fact that just a little bit of trauma attending oversight decreased length of stay by a whopping 4 days suggests that the residents really needed the increased supervision. Discharge planning is a multidisciplinary activity, and should be a major part of the rounding routine as well.

Formalizing the handoff process is always a good thing. Yes, it takes time and planning, but as this and other studies have shown, it is well worth the effort!

Most trauma centers have a book of practice protocols or guidelines. Actually, it is required by the American College of Surgeons verification standards. All centers must have a massive trauma protocol. Many have pain management or alcohol withdrawal or a number of other protocols. The question sometimes arises: why do we need another protocol? Why can’t I do it my own way?

I’ve looked at the literature, and unfortunately there’s not a lot to go on. Here are my thoughts on the value of protocols/guidelines.

In my view, there are a number of reasons why protocols need to be developed for commonly encountered issues.

Tomorrow, I’ll write about imaging guidelines, and how they can help avoid VOMIT (victims of medical imaging technology).

Bottom line: It’s interesting that there are so many articles about practice guidelines, but very few explaining why they are important. Although the proof is not necessarily apparent in the literature, protocol and guideline development is important for trauma programs for the reasons outlined above. But don’t develop them just so you can have an encyclopedia of fifty! Identify common problems that can benefit from the consistency they provide. It will turn out to be a very positive exercise and reap the benefits listed above.

In order for a clinical practice guideline (CPG) to be both useful and readily used, they need to meet certain criteria. They must be:

If your CPG meets all three of these, then it’s got a pretty good chance of being followed. Here are samples of two CPGs for management of solid organ injury in kids. 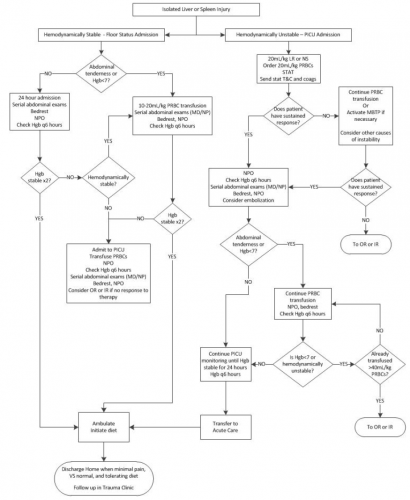 Bottom line: Follow the rules for crafting your own clinical practice guidelines. Or else nobody will follow it!

Trauma centers generally design their trauma teams around the type and volume of injured patients they receive. There must be sufficient depth of coverage to handle multiple “hits” at once. But even the best planning can be overwhelmed by the occasional confluence of the planets where multiple, multiple patients arrive during a relatively short period of time (the “crunch”).

As the reserve of available trauma professionals to see new, incoming patients dwindles, it sometimes even becomes necessary to close the center to new patients. Once those who have already arrived have been processed, the trauma center can open again.

This scenario, while hopefully rare, unfortunately introduces a huge opportunity for errors and omissions in care. There is much more clinical activity, lots of patient information to be gathered and processed, and many decisions to be made. How can you reduce the opportunity for these potential problems?

Consider a “post-crunch” debriefing! Once things have quieted down, assemble all team members in one room. Systematically review each patient involved in the “crunch”, going through physical exam, imaging, lab results, and the final plan. It’s helpful to have access to the electronic medical record during this process so everything that is known can be reviewed. Make sure that all clinical questions are answered, and that solid plans are in place and specific people are assigned to implement them.

Once you’ve reviewed all of the incoming, don’t forget your patients already in the hospital. Significant issues may have occurred while you were busy, so quickly review their status as well. Chat with their nurses for updates. Make sure they are doing okay.

Then prepare yourself for the next “crunch”!