Remember MAST Trousers (Military Anti-Shock Trousers)? They were a staple of prehospital care starting in the 1970s and lasting through the turn of the century. But what happened after that? They seem to have disappeared. I recently received a question on the topic recently and wanted to share the real story with you readers. 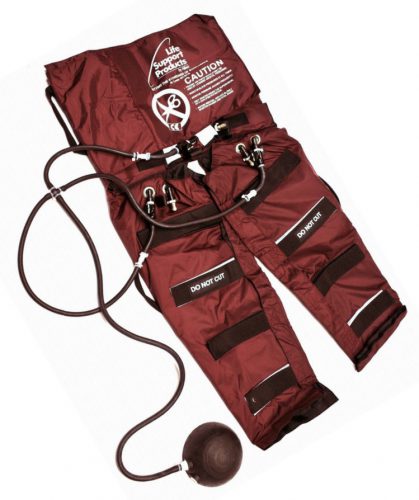 The basic MAST trouser consists of three inflatable compartments: two legs and one covering the abdomen and pelvis. Each can be inflated or deflated separately. The basic concept was first described by a surgeon who wanted to increase blood pressure during neurosurgical procedures in the early 1900s. The US military embraced the concept during the Vietnam war, using it to augment systolic pressure in servicemen in shock.

Military surgeons migrated this device into civilian prehospital care during the mid-1970s, and the American College of Surgeons Committee on Trauma listed this device as essential on all ambulances in 1977. MAST trousers then came into widespread use throughout the 1980s and 1990s.

Early research in the 1970s suggested that this device could provide up to a 20% boost in volume to the upper part of the body when applied. But as occurs with so many new toys, additional research demonstrated that this auto-transfusion effect was actually only about 5% of blood volume. Some significant complications also came to light as lower extremity ischemia and compartment syndromes were described. Ben Taub Hospital published a study in 1987 which showed no improvement in mortality in patients with penetrating injury.

At the end of the century, support for MAST started to dry up. The NAEMSP published a position paper limiting use to ruptured abdominal aortic aneurysms and pelvic fractures with hypotension. The final straw was a review by the Cochrane Collaboration in 2000 that confirmed no reduction in mortality with MAST use.

Although a few older textbooks may still mention MAST trousers, they are no longer the standard of care. There are no longer any accepted indications for their use, and the few trousers that remain are gathering cobwebs in some corner of the trauma basement.