The way we resuscitate major trauma patients has been changing over the past decade. Even the 10th edition of the ATLS course has recognized that so-called balanced resuscitation is important. This concept limits the use of crystalloid and relies more heavily on blood component administration in ratios that more closely approximate whole blood.  Balanced resuscitation typically translates as the use of less than two liters of crystalloid, and blood product transfusion ratios of 1:1 to 2:1 (PRBC to plasma).

We have also recognized the critical importance of rapid control of major hemorrhage, which is best accomplished in an operating room.  The group at the University of Arizona massaged the TQIP database to see if these changes are having a significant impact on our patients.

They looked at five years worth of data, specifically reviewing information on adult patients with both transfusion and laparotomy occurring within four hours of arrival. The authors performed regression analyses to identify trends over the study period. 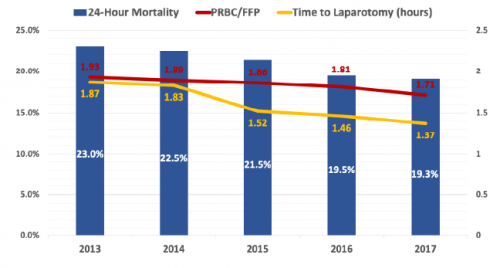 The authors conclude that resuscitation is becoming more balanced and time to surgery shorter, with a significant improvement in mortality.

Bottom line: Well, this is an interested study of associations. It uses a large database, which of course limits some of the information available. There are obvious trends toward faster time to OR (by 30 minutes) and a 4% improvement in survival. But the transfusion ratio really looks to be about the same.

The authors stated that the improvement in transfusion ratios was statistically associated with the improvement in survival. I think this is one of those situations where there is a big difference between statistical significance and clinical significance. Do you really think that giving just 165 additional ccs of plasma could have that much overall effect on survival?

My suspicion is that there is a true association between the more rapid time to OR (and presumably surgical control) and survival. It’s just that the numbers were not clean enough to meet statistical rigor.

This is an interesting abstract, and shows that we are slowly getting better at controlling bleeding. But I think the most important takeaway is that we are not as good at balanced resuscitation as we think we are. We seem to be hovering at the 2:1 ratio, and only very slowly moving toward 1:1.

Questions for the authors / presenter:

Reference: AFTER 9,000 LAPAROTOMIES FOR BLUNT TRAUMA, RESUSCITATION IS BECOMING MORE BALANCED AND TIME TO INTERVENTION SHORTER: HOW LOW CAN WE GO? AAST 2021, Oral abstract #3.