It’s fat embolism week! Fat embolism syndrome (FES) is one of those clinical problems that trauma professionals read about during their training, then rarely ever see. Although the clinical manifestations are frequently mild, they can progress rapidly and become life-threatening. Over the next five days, I’ll try to  help you better understand this condition, and provide details on diagnosis and treatment.

Fat embolism syndrome (FES) is a constellation of findings that arise from a single, unified cause: the escape of fat globules into the circulation (fat embolism). The ultimate resting places of those globules determine the specific manifestations of FES seen in clinical practice. When it occurs, it typically becomes apparent 24 to 72 hours after injury.

Simple fat embolism occurs to some degree any time tissues containing fat are manipulated or injured. It has been demonstrated during plastic surgical injections for cosmetic purposes and lipid infusions. It is more frequently seen with orthopedic injuries, especially those involving the femurs and pelvis. And it makes sense that the more fractures that are present, the more likely fat embolism will occur. Embolism is also known to occur when performing orthopedic procedures, particularly those involving the marrow cavity (intramedullary nailing), but has also been reported in total knee and hip procedures.

Fat embolism syndrome has a generally reported incidence of 1 – 10%, although I believe that is on the high side. I see a case every 3 – 4 years in a predominantly blunt, fracture-laden practice. Fat embolism without symptoms occurs much more frequently. A study from 1995 using transesophageal echo found evidence of emboli in 90% of patients with long bone fractures.

But how do these fat globules get into the circulation and produce such chaos? We know that they can be mechanically pushed into small venules when tissues containing fat cells or bone marrow are injured. In bone, there are numerous small venules located throughout that are anchored to it. When the bone is fractured, these venules tear and are held open so yellow (fatty) marrow can be pushed into them.

If enough emboli enter the blood stream, they may accumulate in the end vessels of tissues and block flow. Although this is a simple and appealing explanation, it may not be the full story. If the emboli primarily occur during and after injury, why does it take several days for the full-blown syndrome to develop?

A likely explanation is that the fat globules begin to degrade while in the circulatory system. Breakdown into free fatty acids results in the release of a cascade of cytokines and other mediators. The inflammatory response around the end vessels create the gross pathology that we associate with fat embolism syndrome.

Although not strictly traumatic, rectus sheath hematomas frequently come to the attention of trauma professionals. In some cases, they may be due to vigorous physical activity or blunt impact. They may also occur spontaneously, especially in patients who are anticoagulated.

This is not a very common condition, accounting for only 1-2% of patients who present with acute abdominal pain.  The common etiology of rectus hematomas is either a tear of the major blood supply (superior and inferior epigastric arteries) or a tear of the muscle itself with bleeding from smaller vessels. The loose attachment of the inferior epigastric  and the fixed perforating  muscular branches make injury in the lower half of the muscle more common.

These hematomas are frequently self-limiting problems. The rectus sheath provides containment for the hematoma, and as pressure rises, bleeding slows and stops. However, if the hematoma is able to escape posteriorly, it can result in life-threatening bleeding.

Presentation generally consists of abrupt onset of focal abdominal pain, and an abdominal wall mass. The pain can be rather intense, making it difficult to determine if it is intraperitoneal or in the body wall. Tip: ask the patient to tense their abdominal wall muscles, then palpate the area. If the tenderness increases, then it is more likely due to an abdominal wall source. Tensing the muscles will shield sources inside the peritoneal cavity, decreasing tenderness to palpation.

Diagnosis may be made by physical exam, but not always. The hematoma may be seen using ultrasound, but the gold standard is the contrast-enhanced CT. Contrast is essential to determine if active extravasation is occurring. 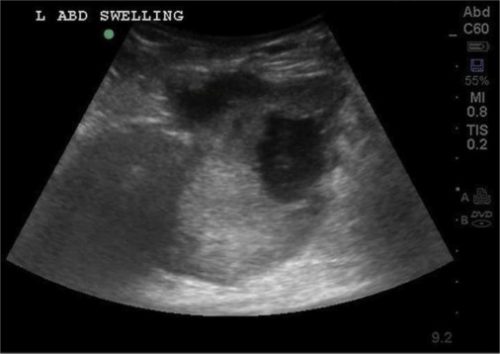 Patients who are hemodynamically stable and do not have active extravasation may be treated conservatively. However, a significant number of patients will require at least one unit of blood. Be prepared and send a type and crossmatch. Conservative management includes ice packs for pain relief, direct pressure (sand bags), and reversal of anticoagulation if possible. Stable patients with extravasation on CT should be evaluated by angiography and embolized if a bleeding vessel can be identified.

Unstable patients must be resuscitated promptly with fluid and blood so they can be taken to the angiography suite. Operative exploration is extremely unsatisfying and should be avoided, since it is difficult to find the bleeding vessels in the midst of a huge hematoma.

In my last post, I described the evolution of the classic approach to penetrating neck injury. Today, I’ll propose a new way of managing it based on a combination of physical exam and CT scan.

This proposal is based on the high degree of accuracy that CT angiography of the neck provides. It is very sensitive for identifying even small injuries to the aerodigestive tract and vascular system. This study is based on work done at LA County – USC Hospital several years ago.

The trauma group at LAC+USC organized a prospective, multicenter study using a multidetector CT angiography of the neck for initial screening of penetrating neck injury. This allows evaluation the neck as a single unit, not as three zones. It also solves the problem of trying to apply zones to injuries that cross several of them.

The new algorithm that was tested utilized an initial physical exam, first looking specifically for “hard signs” of injury.  The following were considered the hard signs:

These patients were immediately taken to the OR and explored through an appropriate incision.

Patients with no signs or symptoms were admitted and observed for at least 24 hours. All other patients were considered to have “soft signs.” They underwent multidetector CT angiography of the neck, with a scanner having at least 40 slices. Further evaluation of these patients was based on the exam and CT scan.

Bottom line: This is an intriguing paper that takes advantage of both physical examination at CT angiography. The results are impressive, but the numbers are still relatively small. It lends support to the argument that CTA is not required in all stable patients. But I can’t recommend completely changing our practice yet based on this one study. Additional numbers are certainly needed, but I suspect that this will become the norm in the future. I would also recommend that we all carefully look at our diagnostic algorithms to see other areas where we might identify and eliminate unneeded imaging, labs, etc.