Minor complications from nasogastric tube insertion occur relatively frequently. Emesis is fairly common when the gag reflex is stimulated by the tube in the back of the oropharynx. An infrequent but possibly fatal one is insertion through the cribriform plate.

The cribriform plate is located directly posterior to the nares and is part of the ethmoid bone. It is very porous in nature and weaker than the surrounding portions of the ethmoid. It is easily fractured, and can be seen is association with basilar skull fractures. This is one source for rhinorrhea in patients with these fractures.

Cribriform fracture is a contraindication to unprotected insertion of a nasogastric tube. If you look at the sagittal section below, the plate lies directly behind the nares. When inserting the NG tube, we are usually taught to aim the tube straight back. Unfortunately, this aims it directly at the cribriform. If a fracture is present, it is possible that you may be inserting a nasocerebral tube! 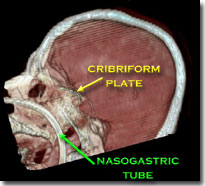 The usual symptoms when this occurs consist of immediate neurologic deterioration to coma, and a unilateral or bilateral blown pupil. The tube must not be withdrawn, because it will cause significant injury to the base of the brain. A stat neurosurgical consultation must be obtained, and if the patient is salvageable, the tube must be withdrawn through a craniectomy.

To avoid this dreaded complication, identify patients at risk for cribriform injury. They are:

If your patient is at risk, follow these guidelines: 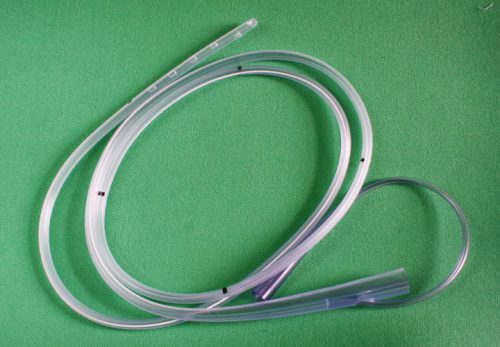 This is a related, follow-on post from yesterday, where I discussed activating your trauma team after transfer from another hospital. What about patients presenting directly to your hospital, but some time after their injury?

Admit it. It’s happened to you. You get paged to a trauma activation, hustle on down to the ED, and get dressed. The patient is calmly and comfortably lying on a cart, staring at you like you’re from Mars. Then you hear the story. He has a grade V spleen injury. But he just got back from CT scan. And his car crash was yesterday!

Is this appropriate? The answer is no! But, as you will see, the answer is not always as obvious as this example. The top thing to keep in mind in triggering a trauma activation appropriately is the reason behind having them in the first place.

The entire purpose of a trauma activation is speed. The assumption must be that your patient is dying and you have to (quickly) prove that they are not. It’s the null hypothesis of trauma.

Every trauma center has trauma activation triage criteria that try to predict which patients will need this kind of speed. Does the patient in the example above need this? NO! He’s already been selected out to do well. Why, he’s practically finished the nonoperative solid organ management protocol on his own at home.

Here are some general rules:

If you do decide not to trigger an activation in one of these cases, please let your trauma administrative team (trauma medical director, trauma program manager) know as soon as possible. This may appear to be undertriage as they analyze the admission, and it’s important for them to know the reasoning behind your choice so they can accurately document under- and over-triage.

I had a great question sent in by a reader last week:

Some trauma centers receive a number of transfers  from referring hospitals. Much of the time, a portion of the workup has already been done by that hospital. If the patient meets one or more of your trauma activation criteria, do you still need to activate your team when they arrive?

And the answer is: sometimes. But probably not that often.

Think about it. The reason you should be activating your team is that you suspect the patient may have an injury that demands rapid diagnosis and treatment. The purpose of any trauma activation is speed. Rapid evaluation. Fast lab results. Quick access to CT scan or OR. If a significant amount of time has already passed (transported to an outside hospital, worked up for an hour or two, then transported to you), then it is less likely that a trauma activation will benefit the patient.

There are four classes of trauma activation criteria. I’ll touch on each one and the need to activate in a delayed fashion if present, in priority order.

Bottom line: In many cases, the patient transferred in from another hospital will not need to be a trauma activation, especially if they have been reasonably assessed there. The patient should be rapidly eyeballed by your emergency physicians, and if there is any doubt about their condition, activate then.

However, if little workup was done at the outside hospital (my preference), and the injuries are “fresh” (less than a few hours old), then definitely call your team.

Every Fourth of July, someone just has to try an “off label” use for fireworks.

Don’t try this at home. Even “trained professionals” would never do anything like this.