Urgent and emergent intubation is challenging enough, but what if your patient is sporting some type of tongue piercing? Does it make a difference? Do you need to do anything differently? 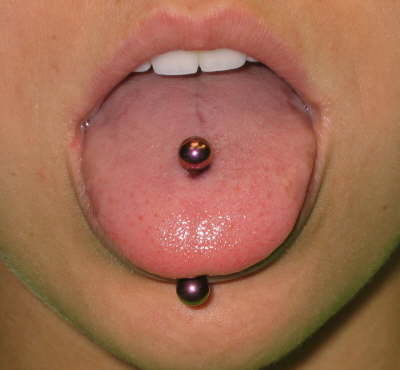 Obviously, the jewelry may physically impede the process of intubating the patient, impairing visualization of structures or getting in the way of inserting the tube. It can also cause complications later down the road, such as pressure necrosis from the tube coming into contact with it.

The anesthesia literature recommends removing all oral jewelry prior to elective intubation, or declining to do the case if the patient refuses. Unfortunately, trauma professionals do not have that option when the patient needs an emergency airway.

Here are some pointers for dealing with oral jewlry:

Note: both hands must always be in contact with the jewelry at all times! It is slippery, and if the pieces are not controlled, this can happen! 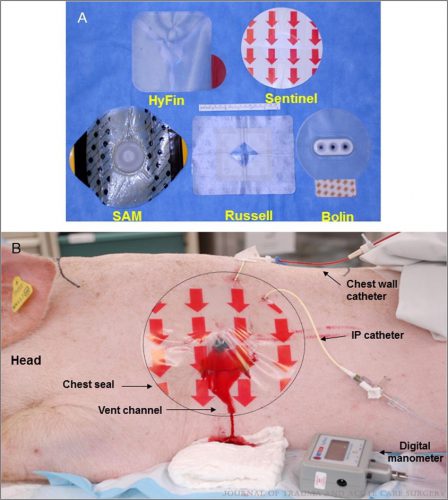 Delayed diagnoses / missed injuries are with us to stay. The typical trauma activation is a fast-paced process, with lots of things going on at once. Trauma professionals are very good about doing a thorough exam and selecting pertinent diagnostic tests to seek out the obvious and not so obvious injuries.

But we will always miss a few. The incidence varies from 1% to about 40%, depending on who your read. Most of the time, they are subtle and have little clinical impact. But some are not so subtle, and some of the rare ones can be life-threatening.

The trauma tertiary survey has been around for at least 30 years, and is executed a little differently everywhere you go. But the concept is the same. Do another exam and check all the diagnostic tests after 24 to 48 hours to make sure you are not missing the obvious.

Does it actually work? There have been a few studies over the years that have tried to find the answer. A paper was published that used meta-analysis to figure this out. The authors defined two types of missed injury:

Bottom line: In the complex dance of a trauma activation, injuries will be missed. The good news is that the tertiary survey does work at picking up many, but not all, of the “occult” injuries. And with proper attention to your patient, nearly all will be found by the time of discharge. Develop your process, adopt a form, and crush missed injuries!

A couple of years ago I wrote about a paper that examined patterns in delayed diagnoses in injured children. It was a single-hospital study of children treated at a Level II pediatric trauma center. In that study, the overall rate of delayed diagnosis was 4%. The orthopedic component looked high but was not really broken down in detail.

A soon-to-be-published study looked at more recent experience with this issue, specifically in pediatric patients with orthopedic injury. They specifically evaluated all pediatric patients with bone, joint, peripheral nerve, and tendon injuries treated at their Level I pediatric trauma center over a nearly 6 year period. Orthopedic surgery consults were obtained at the discretion of the trauma or primary service.

How good was their discretion? Here are the factoids:

Bottom line: Delayed diagnoses happen in children, too. And typically, they are due to a failure in the physical exam. Sometimes there is nothing to discover on the exam. But often times, if the mechanism is fully taken into account and a really good  exam is performed, these injuries may be found early.

I don’t consider an injury found on tertiary exam to be a delayed diagnosis, as long as it is performed within a reasonable time frame (24-48 hours max). It’s a well established fact that some injuries will not manifest as pain or bruising until the next day, or longer. So pick a maximum time interval (but don’t make it too early either) and do a tertiary survey on all children who are trauma activations, have multiple injuries, or have a significant mechanism.

This month’s newsletter is dedicated to those hospitals that transfer trauma patients to higher level trauma centers. And there are lots of you out there. I’ve included some information to help with the decision making in that process. Here are the topics covered:

I’ve also included a link to a Word document version of the checklist so you can download and customize it to suit your hospital’s needs.

The next newsletter will be released over the July 4 weekend. It will cover the other end of the transfer: the receiving hospital.

All of my subscribers received this newsletter at the beginning of the month. Subscribe now and be sure to get the next issue early, too.  So sign up for early delivery now by clicking here! 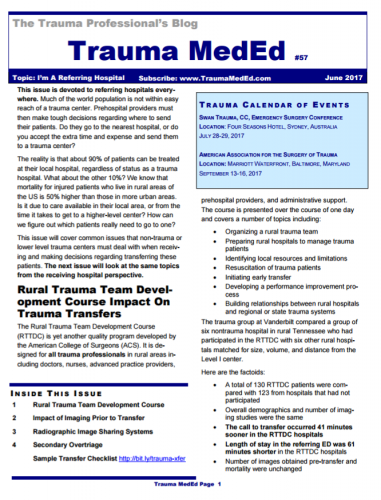