By now, you know the story. Sick little girl who comes to your ED with a rigid abdomen. She’s been previously healthy, and there is no history of trauma. 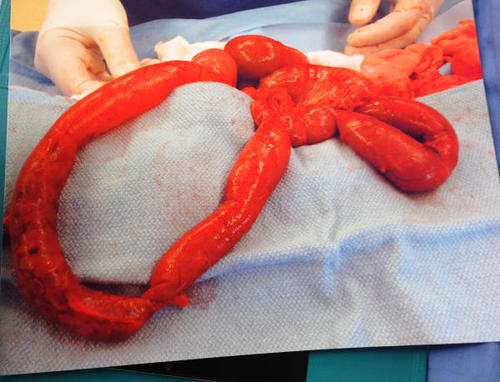 This is a loop of small bowel. It it very inflamed, and you can see a darker color on the portion that is at the left of the picture. This is an area of necrosis, indicating that this portion lost its blood supply some time ago, possibly even a day or two.

A number of readers guessed volvulus or internal hernia, which are on the usual list of differential diagnoses.

But hey, this is the Trauma Professional’s Blog!

Look again carefully at that loop of bowel on the left. There is no mesentery attached to it! This is a classic buckethandle injury. And the only way to get it is from blunt force, typically a car crash. There were also low grade lacerations of the liver and spleen.

On closer questioning, the father’s story began to change when confronted with this information. As the child recovered from surgery, she underwent a workup and was found to have a number of healed and healing rib fractures of various ages. Child protective services was involved, and the father ultimately admitted to repeatedly striking her in the abdomen in a fit of rage.

Bottom line: Healthy children who are abruptly found to be very ill (or in cardiac arrest) have a high likelihood of non-accidental trauma in addition to the usual medical and surgical culprits. Never lose sight of that, and always maintain some suspicion, no matter how nice the parents seem to be. Treat the child, but always be cognizant of their social/domestic situation!