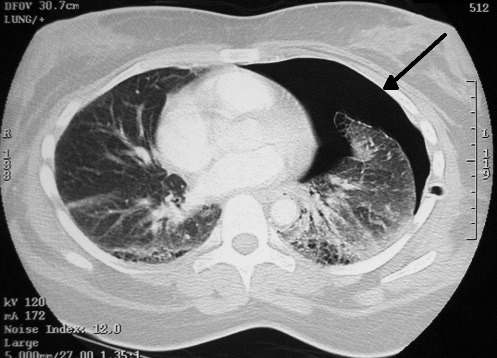 However, flying in a commercial airliner is different. Even though the aircraft may cruise at 30,000+ feet, the inside of the cabin remains considerably lower though not at sea level. Typically, the cabin altitude goes up to about 8,000 to 9,000 feet. Using Boyle’s law, any volume of gas (say, a pneumothorax in your chest), will increase by about a third on a commercial flight.

Every trauma professional knows that seat belts save lives. Numerous studies have borne out the survival benefits of wearing them. But do those same professionals practice what they preach?

A study by NHTSA study showed that at least 42% of police officers killed in car crashes were not wearing their seat belts. The number of officers killed in traffic accidents in 2010 has increased by 43% over 2009 numbers. Possible reasons may be that seat belts impede the process of getting into and out of the car quickly, and that the belt may get tangled in utility and gun belts.

What about paramedics and EMTs? I couldn’t find any studies looking at this group. However, observation tells me that medics in the patient care compartment don’t always buckle up. The reason typically given is that wearing a belt may compromise patient care by limiting access to equipment, using the radio, or performing CPR. However, I think that patient care is even more limited if the EMS professional is disabled or killed in a rig crash. The patient is much more likely to survive such a crash since they are firmly strapped into place.

How can you stay safe in the back?

I’m interested in your comments about how common of a problem this really is. Unfortunately, I don’t think NHTSA will be doing any studies on this one.

Fracture blisters pop up (!) in trauma patients now and then, and nobody seems to know what to do with them. Here’s a primer on dealing with them.

A fracture blister typically occurs near fractures where the skin has little subcutaneous tissue between it and bone. These include elbows, knees, ankles and wrists. They tend to complicate fracture management because they interfere with splinting, casting, and incision planning for open reduction procedures. They can appear anytime within a few hours of injury to 2-3 weeks later. 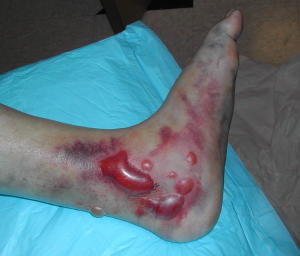 So should we pop the blisters and operate/splint, or wait for them to heal and then go to surgery? Unfortunately, there’s no great data on this and it usually hinges on the preferences of the orthopaedic surgeon. Waiting delays care an average of 7 days, and longer for tibial plateau and calcaneal fractures. Operating immediately anecdotally increases wound infection rates.

Bottom line: Anticipate fracture blisters by looking at location and severity of mechanism. Try to schedule operative reduction as soon as is practical. And monitor the wound closely to make sure that delayed blisters don’t cause complications due to splinting or casting.

For decades, the standard of care for irrigation and debridement (I&D) of open fractures has been within 8 hours of injury. There is a growing body of orthopedic literature that says this isn’t necessarily so.

A paper presented at AAST, but not yet published, retrospectively looked at their experience with early (<8hrs) vs late I&D in a series of 248 patients. They looked at infection rates stratified by time and upper vs lower extremity.

The authors concluded that all lower extremity open fractures should be dealt with in the 8 hour time frame, whereas upper extremity fractures can be delayed for lower Gustilo classes.

Bottom line: I don’t necessarily buy into all the results from this small study. The orthopedic literature has already refined this concept. At Regions Hospital, we allow up to 16 hours to I&D for open fractures up to and including Gustilo class IIIA. Above that, the 8 hour rule is followed. We periodically review our registry data on all open fracture patients to make sure that the extended time frame patients are not experiencing an increase in wound complications. And they haven’t in our 8 year experience in handling them this way.

Refresher on the Gustilo classification system: