Members of the trauma team must frequently protect the cervical spine when moving the patient or performing certain procedures. In most cases, a cervical collar is placed which does a fine job of this. Occasionally, though, the collar must be removed to provide access to areas near or under the collar.

When the collar is off, someone must be charged with immobilizing the cervical spine. Sometimes this is incorrectly referred to as providing inline traction and not inline stabilization.There is a big difference!

Inline traction is used to try to realign cervical vertebra that are malpositioned due to fracture or ligamentous injury. This should only be performed under the guidance of a neurosurgeon!

Inline stabilization merely means that the patient (or trauma professional) is restrained from moving the cervical spine. This is commonly needed while intubating the patient, so that the intubator does not extend the neck when trying to visualize the cords.

Why is this important? Check out the images below. If a severe injury has already occurred, traction on the neck may have devastating consequences! Inline stabilization is the only way to go. 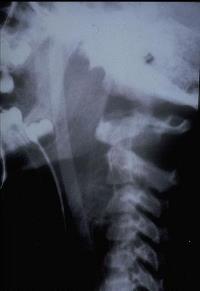