What is the foreign object seen in this head CT? Hint: the patient has not been seen by a neurosurgeon. Yet.

This is the third and final topic that I discussed at the 25th Penn Trauma Reunion last Friday. Printer technology has progressed from dot-matrix printers (pushing ink out of a cloth ribbon with little metal pins) to laser printers (fusing dye rolled onto the paper) to inkjet printers (blowing little dots of ink onto paper out of a cartridge).

The next logical step was to go beyond printing with small flat dots of ink and using small spheres of plastic. These tiny spheres can be layered on top of each other using a 3D printer using the the same inkjet type technology and then fused together using a laser. These printers are popular in manufacturing, where they can be used to quickly create prototypes or small parts. Orthopedic surgeons have been using them to print out 3D representations of complex fractures to plan reconstructive surgery (click here for details).

Now consider replacing the little plastic spheres with various cell types cultured from a patient. Load up the “ink” cartridges and start printing some tissue! Anthony Atala runs the Institute for Regenerative Medicine at Wake Forest University and is a pioneer in using this technique. He is able to print 10×10 cm skin grafts on pigs with good results (read about it here). Atala demonstrated the concept of printing whole organs at the TED2011 conference last year. Watch the YouTube video of a kidney being printed here. At this stage of development, it is not a functioning organ, but it’s a great proof of concept.

I believe that this technology is extremely promising. Printing simple human tissues like skin will not be far off. Although it seems farfetched, the picture below shows what is in store in the future. Hopefully, the days of donated organ shortages is coming to an end. 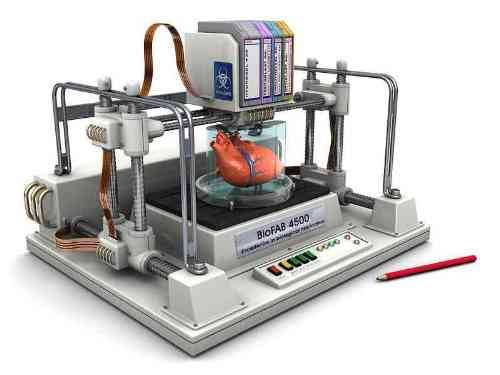 The second paper I’ll be discussing at the Penn Trauma reunion tomorrow deals with radiation exposure in trauma. Specifically, I’ll be talking about the amount of radiation the patient is exposed to during their initial evaluation. A lot of work is being published on this topic, but the paper I selected took a different and more accurate approach.

The trauma group at Sunnybrook in Toronto measured surface radiation exposure in a group of 172 major trauma patients. Dosimiters were placed on the neck, chest and groin, and were ideally kept there during the entire hospital stay. A software algorithm was used to calculate organ dose based on the surface measurements. This differs from the more commonly used method of counting studies and calculating dose based on published averages of radiation delivery.

The study was weakened by the number of patients that were excluded or who decided to remove their dosimeter at some point. But a number of interesting facts were revealed:

Bottom line: We know radiation exposure occurs in our patients, and we know that it’s increasing. It won’t be that long until we start to see the after-effects of these imaging studies, especially in younger patients. What you can’t see does hurt your patients! We need to quickly strike a balance between avoiding missed injuries and irradiating the patient. Specific guidelines to direct ordering of radiographic studies must be developed, and our radiology colleagues need to continue to strive for techniques that adhere to the ALARA (as low as reasonably achievable) philosophy.

The first paper I’ll be presenting on Friday at the Penn Reunion deals with tranexamic acid (TXA). This drug works differently than the quick clotting agents out there. It’s an antifibrinolytic, so it actually prevents clot breakdown. It has been approved by the FDA for use in hemophiliacs undergoing dental work and for menorrhagia. Thrombotic complications have been described, so it cannot be used with prothrombin complex concentrate or recombinant activated factor VII.

The most recent and best known study on TXA is the CRASH-2 study. It was extremely well designed and included over 20,000 patients in hospitals spanning 40 countries. The study design has survived serious scrutiny. They found that TXA use in trauma patients reduced the relative risk of death by 9% (from 16% to 14.5%). The risk of death specifically from bleeding was reduced by 15%. And use of TXA in the most severely injured patients, those who would die of bleeding on the day of randomization, was reduced by 20%. CRASH-2 suggested that TXA was of most benefit when given within 3 hours of injury and in patients with a systolic pressure less than or equal to 75 torr. There were no adverse events or differences in thrombotic events, including deep venous thrombosis.

Bottom line: TXA has been shown to be effective, safe and inexpensive (about $200 for treatment using retail pricing). It is the only drug that has been shown to reduce all-cause mortality from bleeding in a high quality trial. And it only needs to be used in 67 major trauma patients before one life will be saved. It has already been adopted by some hospitals in both the US and the UK. Trauma centers should begin to think about incorporating this important drug into their initial treatment protocols now. HOWEVER: Since it is not FDA approved in the US, we may have to wait a little longer here to start using it in earnest. And think about the possibilities when EMS can start giving it in the field!

I’m traveling to Philadelphia this week to celebrate the 25th anniversary of the trauma program at the University of Pennsylvania. I am one of the three founding surgeons and have been asked to speak at the academic forum portion of the program. I’ll be talking about three papers that should have changed our practice.

For the remainder of the week I’ll be writing about those three papers. They involve the use of an agent that helps control bleeding, radiation exposure in trauma imaging, and the use of technology developed outside the field of medicine to treat trauma patients.

Tune in as I work my way through those important studies. And on Friday, I’ll be tweeting any important or interesting info presented at the academic forum.