Radiologists sure know their anatomy! The vast majority of the time, I actually know what they are describing. But every once in a while they’ll toss in some term that I know I probably learned about in medical school (last century). For whatever reason though, I’m just not able to retrieve it.

Which brings me to the pars fracture. Hmm. I figure that if I have to hit the books again to look something up, there are probably a few other trauma professionals out there who are dying to know what it is, too. Here’s a diagram of a typical vertebra: 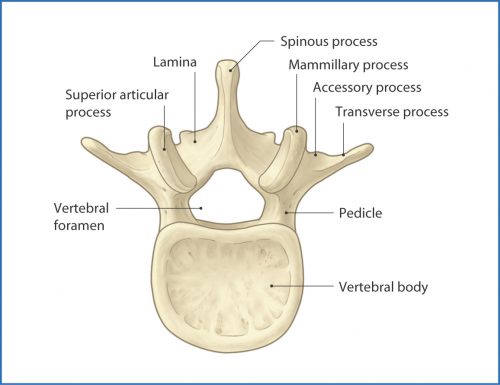 The arch extending away from the vertebral body consists of the pedicles, which are connected by the lamina. A number of things jut off from this arch, including the transverse and spinous processes and the articular processes.

The area between the lamina and pedicle and adjacent to the articular process is called the pars interarticularis. This area is a bit thinner and flatter than the rest of the arch and can fracture if sufficient acute stress is applied. It can also fracture if enough chronic stress in the area occurs. This pattern is typically seen in the lumbar spine, but may also occur at the cervical level. Thus, a pars fracture or pars defect is simply a fracture through this area.

Another term you may see with regard to the pars is spondylolysis. This is defined as a defect in the pars interarticularis, typically from a fracture. So if you see either of these terms in a radiology report, recognize that they are basically one and the same.

Here is a nice image showing the location of the pars, and the axial CT appearance of “bilateral pars defects.”