The arguments about whether NSAID administration has any effect on bone healing continues to be argued by our orthopedic and spine surgery colleagues. In the early days of research in this area (about 20 years ago) there were concerns in animal models that there might be a problem. Apparently lots of rats and bunnies were suffering from fractures in those days.

But physiologically, how could NSAIDS do this? Here’s a simplified diagram of how the bone healing process works. 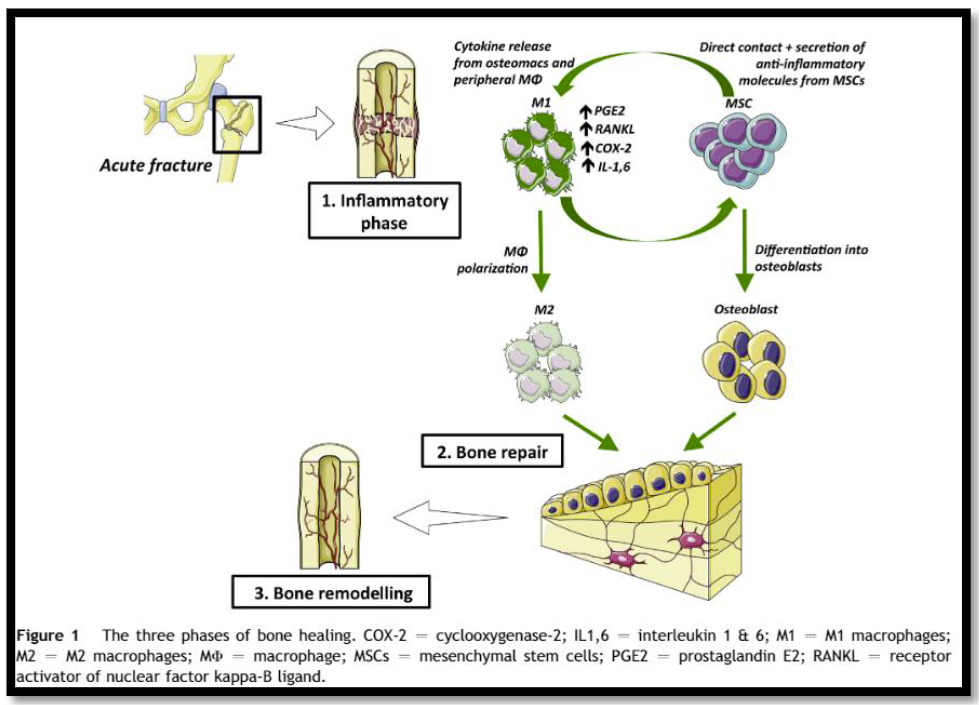 First, an acute injury occurs and macrophages and other cells move into the area to start the inflammatory process. COX-2 receptors are highly expressed on these cells, resulting in an increase in prostaglandin E2 (PGE2) production.

PGE2 then promotes proliferation of stem cells that differentiate into osteoblasts, which in turn begin forming bone to repair the injury.  In theory, if PGE2 is reduced in the healing area there is the possibility that bone formation may be impaired, leading to non- or malunion or refracturing.

Administration of NSAIDs can block COX-1 and COX-2 receptors throughout the body. This serves to decrease prostaglandin production and hence reduces inflammation and pain. Doesn’t it follow that giving these drugs should be bad for bone formation in patients with fractures?

Not so fast! There are a number problems with this argument. First, not all NSAIDs are created alike. Here is a chart that shows where the primary focus of COX inhibition is with some common NSAIDs.

Note how the common over-the-counter drugs affect both COX-1 and COX-2, yet there are some that are more selective. So the choice of drug may be relevant.

And we can’t assume that an in vitro effect in a Petri dish of cells actually carries over into the in vivo world. Many researchers rely initially on animal models to study drug effects in vivo. Predictions based on studies of rats and bunnies frequently do not pan out in humans.

We are left with only a theory based on an understanding of the basic mechanism of bone healing. Tune in to my next post where I discuss the research that’s been done in this field and whether it actually translates into human bone healing or not.