The TRISS score is the great grand-daddy of probability of survival prediction in trauma, first introduced in 1981. It is a somewhat complicated equation that takes the injury severity score (ISS), revised trauma score (RTS), and age and cranks out a probability between 0 and 100%. Over the years, this system has been well validated, and its shortcomings have been elucidated as well.

Many authors have attempted to develop a system that is better than TRISS. Years ago, there was the New-TRISS. And back in the day (early 1990s) I even developed a neural network to replace TRISS. In general, all of these systems may improve accuracy by a few percent. But it has never been enough to prompt us to ditch the original system.

The group at the University of California at Los Angeles developed a machine learning algorithm using ICD-10 anatomic codes and a number of physiologic variables to try to improve upon the original TRISS score. They analyzed three years of NTDB data and attempted to predict in-hospital survival.

Here is the ROC curve for machine (blue) vs TRISS (yellow): 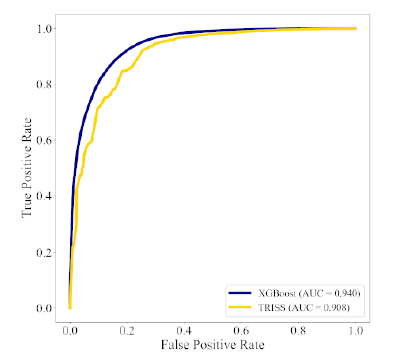 The authors conclude that the machine learning model performs better than TRISS and that it may improve stratification of injury.

Bottom line: This study is one of many attempting to improve upon good old TRISS probability of survival. Why have there been so many attempts, and none that have appeared to “stick?” Here are my thoughts:

In general, any time a new and better algorithm is introduced that shows much promise, someone wants to patent it so they can monetize the work.  Obviously, I don’t know anything about the plans for this algorithm. Somehow I doubt that many centers would be willing to abandon TRISS for an incremental improvement that may not be clinically significant at any price.