Here’s a very interesting case for you. A construction worker was carrying an object inside a building WHILE HOLDING HIS NAIL GUN! As he passed through the door, his elbow hit the frame and he brushed his neck with the business end of the gun. Guess what happened?

He experienced sharp pain, then noted pain every time he swallowed. He checked himself out in the mirror, and there was a small puncture wound in the right side of his neck. He presented to his local ED, with the complaints just noted. He was hemodynamically stable and neurologically intact. His airway was patent, and he had minimal pain. The following image was obtained. The nail measures about 6cm in length. 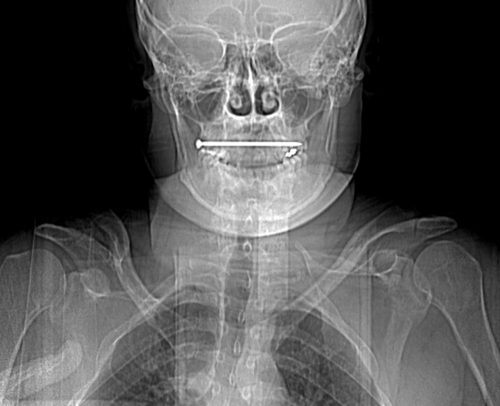 Let me know (by Twitter or comments) what additional information you think you need. I’ll discuss that in my next post. Then we’ll figure out what to do about this problem.