Many trauma centers have moved toward reversing warfarin with prothrombin complex concentrate (PCC) in place of plasma due to the speed and low volume of infusate with the former. In the US, 3-factor PCC was approved by the FDA first, but it has a lower Factor VII content. This usually required infusion of plasma anyway to make up the Factor VII, so what was the point (although there was some debate on this)?

This study retrospectively reviewed adult patients who received one of the above treatments over a 3 year period. Patient who were on oral anticoagulants were excluded. The goal INR was 1.5, and time to correction and number of PRBC transfused were measured. 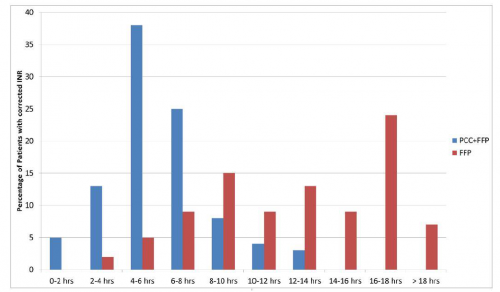 Bottom line: Well, this is an interesting start. I think this abstract suggests that we should incorporate giving 4-factor PCC into the massive transfusion protocol to try to reduce the INR faster. However, the patient numbers are low and several of the results are only weakly significant (units transfused, mortality, p=0.04). Some additional confirmative studies will be needed before this is ready for prime time!

Thanks for an intriguing abstract!