Most trauma professionals recognize the value of motorcycle helmets. I’ve written many articles here on the topic (see below). There is high quality evidence that helmets decrease severity of injury in motorcycle crashes (fewer severe brain injuries, higher survival, etc). And we also know from other studies that riders are not protecting their brain at the expense of their spine and torso.

In the 1970s, 47 of US states had enacted universal helmet laws. It wasn’t long after that the federal government lost its authority to penalize noncompliance. So you know what happened. Special interest groups began to weaken and/or repeal these laws, one by one. Now, although some form of helmet law still exists in 47 states, they apply universally to riders in only 19. In the other 26, only young riders, inexperienced ones, or those with insufficient insurance must wear helmets. But how would law enforcement know that when they see the average motorcyclist whizzing by? Which means that the number of riders wearing them has decreased markedly.

The hard part of doing studies to look at the impact of helmets vs no helmets is placing a specific value on a life. A group at the Medical College of Wisconsin in Milwaukee designed a study to use a specific statistical method to attack this problem. They looked at the the value that one places on a marginal change in their likelihood of death. Another way to look at it is the cost of reducing the average number of deaths by one. This is the Value of Statistical Life analysis.

Bottom line: Enough numbers here to make your head spin. The $2.2 billion savings, along with a value of statistical life of $2.4 billion equals $4.6 billion in calculated gains. Obviously, the science appears more exact than it really is, but the numbers are large enough to confidently state that lots of money can be saved by simply wearing helmets. The hardest part of this is the human factor. Without legislation, people won’t wear helmets. And there are enough people that haven’t had to wear them, that they will lobby to keep it that way. Catch-22. The solution: prevention, although this will most likely be after the fact, when the patient is already injured and in the hospital. Do your part!

Ever wonder how interventional radiologists stop bleeding? They are very skilled in getting access to complicated areas of the arterial tree. Once they have located a bleeding point, they’ve got to plug it up with something.

Over the years, a wide variety of things have been used. They include blood clot, tiny metal or plastic spheres, superglue, and a variety of other creative things. One of the more recent additions is the metal coil.

On xray, these look like little pieces of piano wire in various shapes after they are inserted. But how do they work? They’re metal, and fairly smooth. How does that promote fast clotting?

The answer is more obvious when you look at one of these before it’s been inserted. Note the “fuzz”. These are synthetic fibers that are wrapped into the coil itself, and they are what actually promote clotting when the coil is in place. 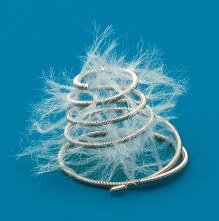 The May newsletter is now available! Click the image below or the link at the bottom to download. This month’s topic is “Nursing & Midlevels”.

Okay, once again here’s the x-ray of an unfortunate trauma patient:

Lets walk through the things I found so you can see how I knew:

Yesterday, I showed you an x-ray of a trauma patient and asked you to tell me all the pertinent things that you saw. Here’s the x-ray again:

And here’s the list of all the things that struck me about it. Tomorrow, I’ll explain how I figured them all out from just this x-ray.

Some of these are easy, some are not. Let me know if you found anything else by tweeting or commenting below.